A New Name In Wisconsin Theater 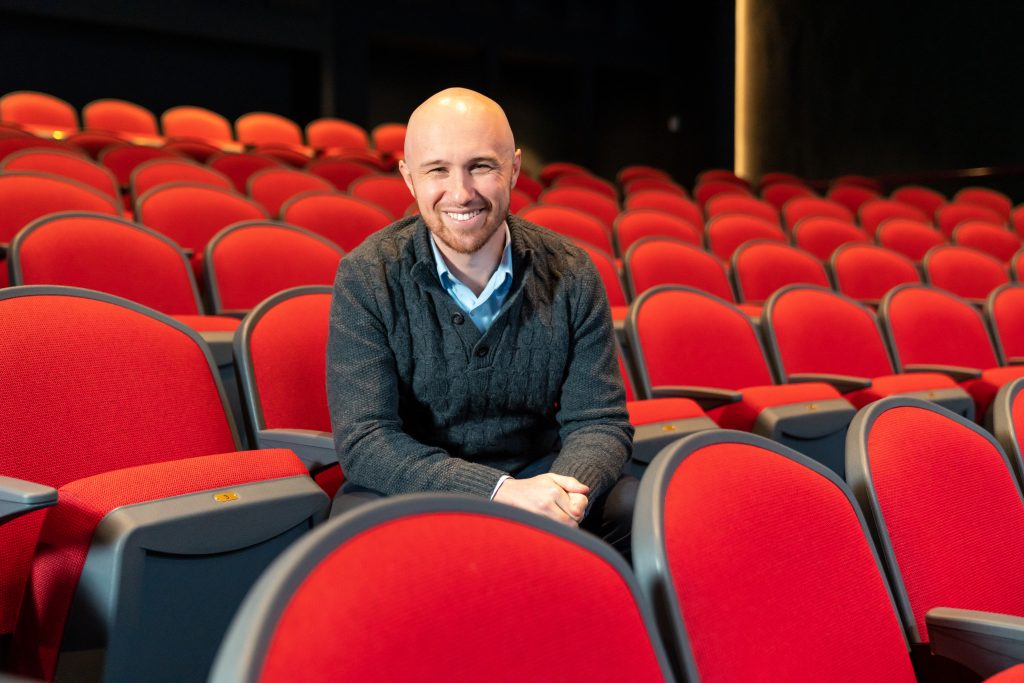 Wisconsin born Jacob Janssen went out of state to get advanced degrees in theater and had a busy career on the East Coast directing, producing and facilitating young playwrights.

He decided to chuck all this and bought a house in Door County and lives there with his wife – who works remotely for a social agency in Washington, D.C.  – and their young son, with another child on the way.

He’s neither crazy nor blindly enamored of the fall colors that bring so many to Door County. He actually moved in a positive direction for his career. He sought and won the job as new artistic director of the Third Avenue PlayWorks, which is committed to original works and professional theater. He already helmed Fast Food, their season opener in September.

Did you even know the theater existed and has for years? It is a thriving artistic enterprise with a 10-member board of movers and shakers, with a theater at 239 N. 3rd Ave., Sturgeon Bay.

He is still listed as artistic producer of “The COOP” www.thecoopnyc.org, based in Manhattan, though it would be more accurate to describe him as former producer who retains contacts. He was one of the founders and facilitators of The COOP, producing both film and theater and encouraging new playwrights, a role that he says the pandemic made primary for him “and I love it.”

He cheerfully concedes he is taking advantage of the new mobility this internet age offers creators in the arts. They can work from anywhere and not only retain contacts but spread their concepts to new quarters. “I like seeing how to grow their reach,” he said. “So now I have a theater to do that as well as the contacts and connections.”

For Janssen, there is the added advantage of putting down roots in the state he was born in and still has ties to. Nor is it annoying to live in Sturgeon Bay (just 10,000 people, but bigger at peak times) since it is also the doorway, as it were, to Door County, Wisconsin’s most famous vacation destination, which has also become a thriving place for theater, with Sturgeon Bay its largest city.

In October he adds a fresh show to the 124-seat modern home made out of an old movie house. This production, though written a few years ago, is new to the territory and boasts a rising name – Anna Ouyang Moench, who has several produced plays under her belt and worked as one of a crowd of writers for the hit new series “Severance.”

The play is called Birds of North America, and critics have called it a comedy edging into an elegy as the skies and the seasons change over a decade. Theater people would call it a two-hander because only two actors are involved, and the director has to keep the ball flowing back and forth. In this case the dad is an active birder who ropes in a daughter who is also feeling family pressures.

Director Janssen has landed a familiar acting (and directing) name to Milwaukeeans, C. Michael Wright as the father, and imported an actress he has worked with before who has considerable West Coast and Chicago credits, Dekyi Ronge. It opens October 2 with a “pay what you can” preview to benefit the Open-Door Bird Sanctuary, formally opens October 6 and runs through Oct. 30. There are price breaks for students and those in the younger generation.

Get a daily rundown of the top stories on Urban Milwaukee
Janssen is also proud of the company’s arts access programs – each season as many as 1,700 tickets are given away through the Door County Library System, and there are also free tickets for high school students not only in Door County but in Brown and Kewaunee counties.

Janssen points out that October is actually the busy season for Sturgeon Bay – maybe those fall colors and birding opportunities – and a vacation destination not only for Wisconsin but for Illinois.

It is also becoming something of an arts haven. It seems to attract theater people, certainly from Milwaukee. Bill Theisen, a busy director and choreographer in Milwaukee, lives up there, as does Wright, who retired a few years ago as artistic director of the Milwaukee Chamber Theatre.  As does Ray Jivoff, similarly, retired from the Skylight.