The 19th century was a crazy time for female impersonators. Excerpt from new book, 'A History of Milwaukee Drag.' 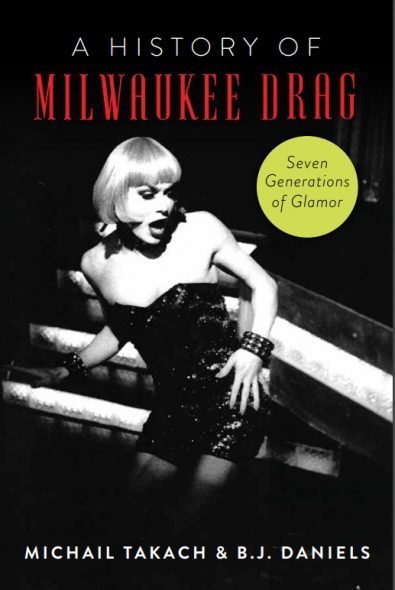 The Dime Museum often welcomed guests from the P.T. Barnum Circus, including the “Fiji Cannibals,” the Sinhalese Family, Indian Princess Ne-Ne-Tah and Madagascar Princess Aggie. While wildly popular, the Dime Museum’s agenda of exploitation sometimes went a little too far. The Milwaukee Journal commented, “The Dime Museum can make bushels more money if its manager will secure the next mayor and exhibit him as a freak. It would prove more an attraction than the Fiji Mermaid.”

On August 25, 1884, the Dime Museum reopened under the management of Jacob Litt, who sought to rise above the shock and gore tactics of his predecessors and create the most desirable and most popular family resort in the city.  Litt was already the manager of the Grand Opera House and the Academy of Music. His upgraded program included Che Mah, a Chinese dwarf; John Davis, the human salamander; Frank Clark, the boneless man; Frank Howe, the tattooed face; Ann Thomson, the armless lady; Guatemalan Indians; performing greyhounds and bears; acrobats, sketch artists; Black comedians; the Greely Arctic Rescue Party; an 800-lb man; Egyptian jugglers; Little Queen Mab, a 40-year-old woman with a child’s body; and Frank LeRoy, the celebrated female impersonator.

LeRoy was the first of many female impersonators to work at Litt’s Dime Museum over the years. He seems to have launched his career touring Midwest dime museums and ten cent circuses, before joining the vaudeville scene. He was still performing as late as 1908.

In Leon’s wake, the Dime Museum exploited local interest in gender transformation. In November 1884, the Dime Museum welcomed Annie Hindle, the first internationally famous drag king. “Hindle, the male impersonator, has become a favorite. Her make-up as a dude is very good,” said the Milwaukee Journal. Hindle went on to scandalize America by presenting as “Charles Hindle” and marrying two women after her husband died.

“A Grand Program, Given in the Grand Palace Museum, on Grand Avenue, by a Grand Company,” the Dime Museum grew to occupy three floors of rotating exhibits. The theater was open daily from 1 p.m. until 10 p.m. and selling up to 7,000 tickets on peak days. The 1885 program announced Caddie Case, the behemoth bearded lady; Signor Seebert and the Hindoo Mystery Box; the human pincushion; bag pipers; C.C. Taylor, mystical magician; three colorless children; Mexican matadors; the All-Burmese Boy Band; a wax statuary of the assassinated President Garfield; a 25-person Original Georgia Minstrels show; the Wild Men of Borneo; human-faced chickens; and many, many more attractions to come. He added chicken incubators so children could watch eggs hatching in real time. Krao, the “missing link” imported from the “tree-tops of Laos,” was rumored to be paid $1,200 per week.  Later in 1885, Litt welcomed a Fat Women’s Convention that earned the largest crowds the Museum would ever see, second only to wax statues of the convicted Chicago anarchists.  He was rumored to be making over $12,000/year.

Although, at its heart an exploitative freakshow, Jacob Litt’s Dime Museum was remarkably inclusive, and launched several lucrative careers for its otherwise marginalized stars. Milwaukee newspapers devoted ample – and respectful – space to interviewing these unique individuals and showcasing their life stories.

After a June 9, 1885, fire, the Dime Museum closed for repairs. “Litt’s Mammoth Dime Museum” reopened on August 25, 1885, with a new vaudeville company and hourly stage performances. Three years later, Litt converted the old museum to the Grand Avenue Theater, which opened on August 27, 1888. Eager to return to legitimate theater, he sold the Grand Avenue to build the Bijou Opera House (631 N. 2nd St.)

Other Dime Museums popped up at the Palace Theater in 1889, the Milwaukee Dime Museum (118 Sycamore Street, now 200 W. Michigan St.) in 1891, Wonderland (182 N. 3rd St) in 1892 and both the Star Museum (165 W. Water St, now 735 N. Plankinton Ave.) and the Olympia Musee (N. 3rd St.) in 1896. Great Lala Coolah, the “Man Venus,” became one of the biggest stars of Milwaukee’s Star Museum. “The Half Man, Half Woman” was first billed in March 1897 at the Columbia Theater. “Behold the most wondrous of all monstrosities,” read the advertisement, “the power form of a man combined with the delicate beauty of a woman. Is it he, she or it?”  Onstage, the Great Lala was a national sensation who toured the nation for three decades and eventually opened a dime museum of his own; offstage, he was Frank Fuller (1870-1931) who claimed to be a natural-born female who was discovered to have male genitals at age 12. After marrying and divorcing a man, the Great Lala began living as a man. He was featured on the cover of the History of Living Wonders, a dime museum souvenir book published in 1916. Eventually, he became the star clown of the Barnum & Bailey Traveling Circus.

Get a daily rundown of the top stories on Urban Milwaukee
Fuller died on July 8, 1931, in New Haven, Connecticut. He was credited, at the time, as the originator of the “he/she carnival act.” Newspapers did not share that Fuller was most likely an intersex person, not the “female impersonator” he was so frequently billed as.

On March 18, 1932, Tod Browning’s movie Freaks opened at the Palace Theater (535 W. Wisconsin Ave.) with a marquee asking, “What Sex is the Half-Man, Half-Woman?” and a character modeled after the Great Lala Coolah.  The Dime Museums were by now just a strange, fleeting memory.

Excerpt from A History of Milwaukee Drag: Seven Generations of Glamor. Available at local independent booksellers and at https://www.amazon.com/History-Milwaukee-Drag-Generations-American/dp/1467149179/ref=sr_1_1

All sales benefit Courage Milwaukee, which supports at-risk, unhoused and crisis-impacted LGBTQ youth in our community.