State Is Awash in Election Ads

By Sarah Lehr, Wisconsin Public Radio - Sep 27th, 2022 08:23 pm
Get a daily rundown of the top stories on Urban Milwaukee 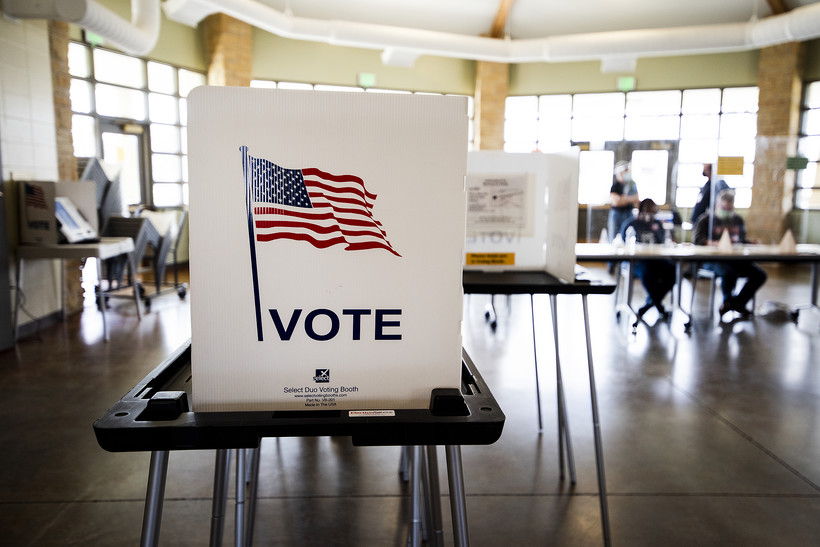 A polling location is open for voters in the spring election Tuesday, April 6, 2021, at Tenney Park in Madison, Wis. Angela Major/WPR

If you’re watching TV in Wisconsin, politics are nearly impossible to escape.

The Badger State has been an “epicenter of political advertising on television,” said Michael Franz, who co-directs the Wesleyan Media Project, a collaboration among academics to track political spending.

That’s especially true of the fight for Wisconsin’s U.S. Senate seat between Republican incumbent Ron Johnson and Democratic challenger Mandela Barnes. Of all the U.S. Senate races throughout the country this fall, Wisconsin’s saw the most TV ads between Sept. 5 and Sept. 18, according to the Wesleyan Media Project’s new study.

TV ads for the face-off between Johnson and Barnes ran more than 14,100 times in that two-week period, with the number of airings roughly divided between the Republican and Democratic sides, the study found.

Georgia’s U.S. Senate race came in second place for the most TV ads, with spots that aired more than 11,700 times. In that swing state, Democratic incumbent Raphael Warnock is trying to fend off Republican challenger Herschel Walker.

The Badger State’s TV ad blitz is not surprising, given Wisconsin’s history of close elections, where the state’s favor tends to swing between Republicans and Democrats, Franz said.

“Wisconsin … has often been discussed the sort of microcosm, if you will, of many of the polarizing debates happening across the country,” said Franz, a government professor at Bowdoin College. “Competitive races bring in more spending.”

Since the Senate is currently split between Republicans and Democrats, stakes are high this fall as each party fights for a majority. Stakes are especially high in Wisconsin, where polling has shown Johnson and Barnes, Wisconsin’s current lieutenant governor, to be nearly neck and neck.

“Both sides see or sense real advantage in winning each of these races,” Franz said. “Republicans would love to win the governor’s race, so that they can start to do some things statewide that they’ve wanted to do but haven’t been able to do with a governor as a Democrat, and Democrats would love to pick up the Senate seat because it’s held by a Republican, and so they could mitigate any loss and other states or try to grow their majority.”

After Texas and Florida, Wisconsin came in third place for the most gubernatorial TV ads aired during the two-week period examined by the study. Democrats appeared to have had an edge in that advertising, with pro-Evers spots accounting for nearly 54% of the 10,195 airings of Wisconsin gubernatorial ads.

That frenzied focus on Wisconsin has led to a lot of ad buys in Wisconsin’s largest city. Ads for the U.S. Senate, U.S. House and governor’s races ran 8,805 times in Milwaukee, placing Milwaukee as the second-largest media market for federal and gubernatorial races, according to the study. Las Vegas came in first, as Nevada prepares for a close gubernatorial race, a hotly contested U.S. Senate race and several U.S. House races, the study noted.

And if the ads this year seem mostly negative, it’s not your imagination.

Attack ads made up a full 63% of the airings of commercials for Wisconsin’s U.S. Senate race between Sept. 5 and 18, the study found. In the race to be Wisconsin’s governor, the proportion of attack ads was even higher at 74%.

Seeing a lot of political ads? Wisconsin is a top state for midterm TV commercials was originally published by Wisconsin Public Radio.