Is Trump a Threat to Republican Candidates?

A Trump endorsement may mean something different in a general election than a primary election.

It has become clear that Donald Trump’s dominance of the Republican Party makes it very hard for independent thinkers to survive. That generalization is true in Wisconsin as well as nationally.

Derrick Van Orden is the Republican candidate for US Representative in the Third Congressional District, running against Democrat Brad Pfaff. The third district covers much of southwestern Wisconsin. The largest city is La Crosse. For years this district was represented by a Democrat, Ron Kind, who is retiring at the end of this year. Recently, the third district has been trending more Republican (Biden lost it in 2020), in part because of gerrymandering and in part following the national trend of reddening small towns and rural areas.

Van Orden attended Trump’s January 6, 2021, rally at the capitol but claims he left when became violent. “At no time did I enter the grounds, let alone the building,” he said.

A pre-primary fundraising appeal from Van Orden would seem to remove any doubts about his commitment to Trump’s MAGA cause. Here is how he described himself (the use of capital letters is his):

I’m Retired Navy SEAL Derrick Van Orden and the Trump Conservative Candidate running in Wisconsin’s Third Congressional District… So many people today are afraid of being silenced or canceled, but not me. … I am:

AND A PROUD PATRIOT

Post-primary, Van Orden’s campaign website paints a very different picture. There is no mention anywhere on the site of either Trump or MAGA. He touts endorsements from Nikki Haley, Former Ambassador and Intelligence Director Richard Grenell, two police unions, and several sheriffs. But the Trump endorsement? It’s nowhere to be found.

The next graph suggests the challenge that people like Van Orden face. It summarizes the responses to a question on the latest Marquette Poll, which asked whether respondents had a favorable or unfavorable opinion of Donald Trump.

Trump’s favorability is strongly related to the partisan orientation of the respondent. Republicans remain highly favorable to Trump, while independents, who Van Orden needs to attract, are unfavorable by a two to one margin.  Democrats suffer from no uncertainty: they don’t like Trump.

The challenge for Republican candidates as they move from the Republican primary to the general election is how to make the transition from using Trump to appeal to the pro-Trump base without Trump driving off independent voters.

Van Orden’s shift in message from a person who is “100% MAGA” in the primary to a website that is 0% MAGA seems aimed at people that don’t particularly like Trump. We will see how well the two groups can co-exist in the same candidate. 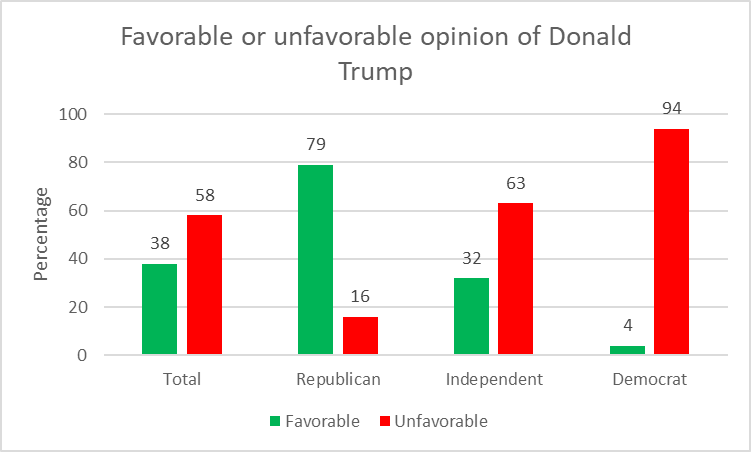 This switch is not unique to Derrick Van Orden or to Wisconsin. Following his win in the New Hampshire Republican primary for U.S. Senate, the MAGA candidate announced that he had decided that Joe Biden had won the 2020 election after all.

Closer to home, Tim Michels beat former Wisconsin Lieutenant Governor Rebecca Kleefisch in the Republican primary for Governor of Wisconsin with the help of an endorsement from former president Trump. Right after the primary, the New York Times’ Reid Epstein discovered that Trump’s endorsement had disappeared from Michels’ campaign home page, suggesting that Michels had adopted a strategy like the one now being used by Van Orden.

Get a daily rundown of the top stories on Urban Milwaukee
Following the Times’ report, Trump’s endorsement reappeared. Michels claimed that its disappearance had been a mistake.

Trump-endorsed candidates often take on Trump characteristics. One is threatening violence. One can see this in Michel’s response to a Journal Sentinel article that reported: “Wisconsin’s Republican candidate for governor Tim Michels and his wife donated $250,000 to anti-LGBTQ and anti-abortion groups, representing about 15% of his total donations in 2020.”

Michels’ response to was to accuse the Journal Sentinel of “anti-Christian bigotry.” On conservative talk radio, he said “I believe people should just, just be ready to get out on the streets with pitchforks and torches with how low the liberal media has become,”

But the Journal Sentinel article was legitimate journalism. Certainly, Wisconsinites wishing to restore the right to an abortion or concerned about protecting the rights of LGBGQ people should not be surprised if Michel’s charitable contributions foretell his policy choices.

By suggesting violence is a proper response to disagreement, Michels strikes a very Trump-like note. He also struck a MAGA note in his attack on Wisconsin’s election system, which he calls a “mess.” As the next chart shows, confidence in the system is largely a product of partisanship, as shown in the graph below.  The belief among Republicans that there is something wrong with Wisconsin’s election system stems from Trump’s refusal to admit that he lost the election. 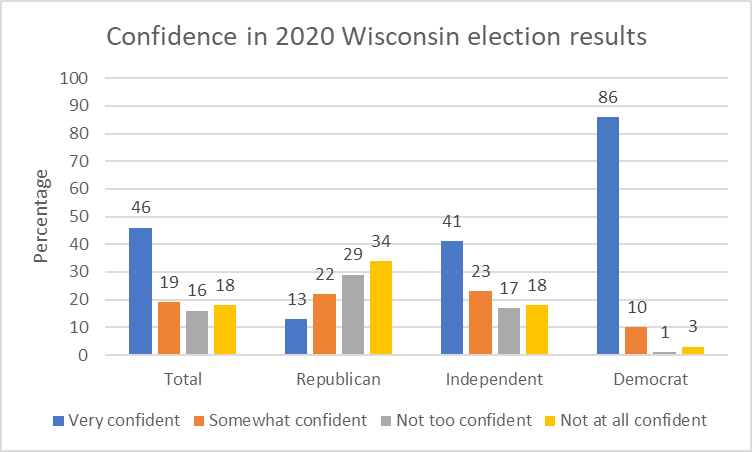 Assembly leader Robin Vos is widely regarded as the most powerful member of the legislature. Yet, by running crosswise to Trump and his MAGA supporters, he almost lost his job.

Under attack from Donald Trump for not delivering Wisconsin to Trump, Vos hired former state Supreme Court Justice Michael Gableman to investigate the election. From all appearances, Gableman was an odd choice. He had already expressed the opinion that Trump had won Wisconsin, he admitted to knowing little about elections and had no experience in investigations.

My theory about Vos’ choice is that he expected Gableman to find nothing that would change the outcome and write his report, which would be accepted by Trump because Gableman had already proved his loyalty. Instead, Gableman seems to have done no investigation nor has he issued any report. Trump grew more publicly irate at Vos.

In the August Republican primary, a man named Adam Steen mounted a last-minute write-in campaign for Vos’ seat in the 63rd Assembly District. He came very close to winning and promises to continue his campaign in the November election. The 63rd is one of the many 60-40 districts, where 60% of the voters are Republican to 40% Democratic, normally safely Republican.

Although no Democrat is on the ballot, Vos’ opponent from two years ago, Joel Jacobsen, announced he is also mounting a write-in campaign. If Jacobsen, does mount a strong campaign and Vos and Steen continue to split the Republican vote, the district could elect a Democrat.

Meanwhile, on his Truth social network, Trump continues to attack Vos, calling him a RINO and claiming that ”rampant fraud” occurred statewide in Wisconsin in the 2020 election. He even accuses Vos of taking his orders from the Democrats, an assertion that his Democratic colleagues would challenge.

Trump’s dominance of the Republican Party has come at a cost to American democracy. It has also imposed a severe cost on the party itself.

One thought on “Is Trump a Threat to Republican Candidates?”