By Danielle Kaeding, Wisconsin Public Radio - Jun 29th, 2022 02:29 pm
Get a daily rundown of the top stories on Urban Milwaukee 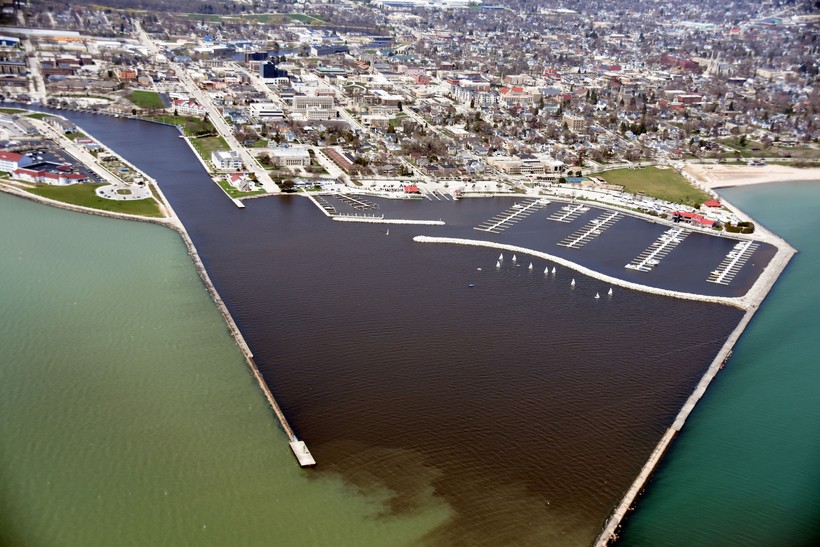 A view of the Sheboygan harbor. Photo courtesy of the Wisconsin Shoreline Inventory and Oblique Viewer

High water levels along Lake Michigan could increase the danger of toxic contamination from industrial facilities along Wisconsin’s lakefront as climate change is expected to cause more intense storms, according to a new report.

The report released this month by the Environmental Law and Policy Center identified a dozen areas along Lake Michigan across four states, including Wisconsin, that are vulnerable to flooding from high lake levels and strong storms.

The group used federal data from the National Oceanic and Atmospheric Administration to pinpoint impacts of storm-related flooding during high lake levels. In Wisconsin, the report states wastewater treatment plants in Two Rivers and Manitowoc, along with Alliant Energy’s coal plant in Sheboygan, would be at risk of flooding that could send sewage or coal ash contamination into the lake.

However, operators of those facilities pushed back against the group’s claims.

Alliant spokesperson Melissa McCarville said flooding hasn’t affected the plant, and she noted the utility’s four coal ash ponds were closed and capped in 2020. McCarville said those ponds are located on a bluff 15 to 20 feet up from the beach, and groundwater monitoring is regularly conducted. 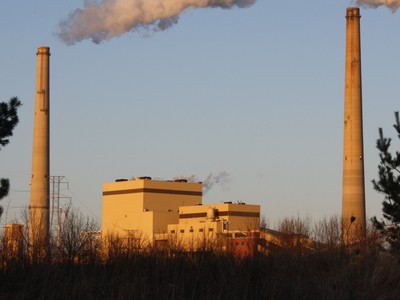 That monitoring has identified statistically significant increases in levels of chemicals like boron, sulfate and fluoride in groundwater sampled from monitoring wells near the ash ponds. Follow-up reports indicate a closed coal ash landfill on the site is the likely source of elevated levels.

“We’re required to maintain and watch that for at least the next 30 years,” McCarville said. “So, if there were any changes to the environment, we would continue to monitor the groundwater around that and maintain the cap.”

She said the utility has no concerns about strong storms causing the ash ponds to overflow since they’re already closed. Alliant recently announced it’s delaying retirement of the facility until mid-2025.

The report also states the Two Rivers Wastewater Treatment Plant could be surrounded by water if lake levels reach 587.3 feet, increasing risk for erosion and contamination.

Dave Casebeer, wastewater treatment plant superintendent for Two Rivers, said the facility has experienced overflows during torrential downpours. The plant was originally built in 1934, but Casebeer said it’s gone through many upgrades.

Even so, he said flooding hasn’t been an issue at the facility.

“At this point, I’m not concerned about it,” Casebeer said. “If the lake comes up 5 feet, we’re going to be underwater.”

Casebeer said they installed riprap, or rocky material, along the shoreline during record highs, but he said there’s not much else that can be done other than moving the facility.

Learner, of the Environmental Law and Policy Center, argued it’s not that water levels will be up to 9 feet higher than current levels, but rather how far up the shoreline storms will send waves from Lake Michigan.

“We’re calling upon the plant owners and operators to reassess the engineering of the plant and take a look at the safety and integrity of the plant based on where water levels are going, as opposed to where they were,” Learner said.

In Manitowoc, concrete barriers have been installed on the grounds of the Manitowoc Wastewater Treatment Plant to help diffuse the power of the waves during storm surges. The facility was originally built in 1939, but it’s been upgraded four times since then.

Plant officials also met with the U.S. Army Corps of Engineers in May about addressing degraded portions of the Corps’ south pier in Manitowoc Harbor. Mike Jaeger, the facility’s superintendent, said there’s concern flooding could compromise the pier and affect an adjacent influent line, or sewer line, that brings wastewater into the facility. 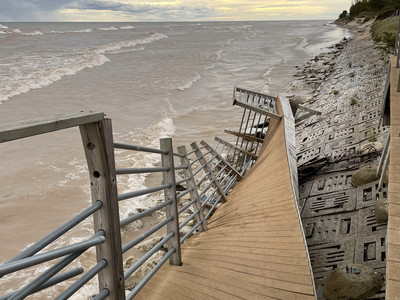 “Should that ever compromise that influent flow line, and it would break or drop down or something like that, then the water won’t necessarily all get into the plant,” Jaeger said. “It would then start going into the harbor.”

Even so, he doubted lake levels would reach as high as the report’s projections of 585.6 feet, which could flood a large section of the facility. He said plant officials have been proactive about addressing high water levels.

He said those projections estimate an increase in lake levels of about a single foot by 2050. Research from Michigan Technological University has estimated increases of up to 17 inches on Lake Michigan by mid-century.

Despite that, Bechle said it’s useful to assess what kind of flooding communities can tolerate, especially with critical infrastructure.

“There’s still a lot of uncertainty as to what we will see with higher lake levels and larger storm surges and waves,” Bechle said. “So, it’s definitely good to be thinking about those sorts of scenarios.”

Listen to the WPR link here