By Christine Hatfield, Wisconsin Public Radio - Jun 19th, 2022 06:44 am
Get a daily rundown of the top stories on Urban Milwaukee 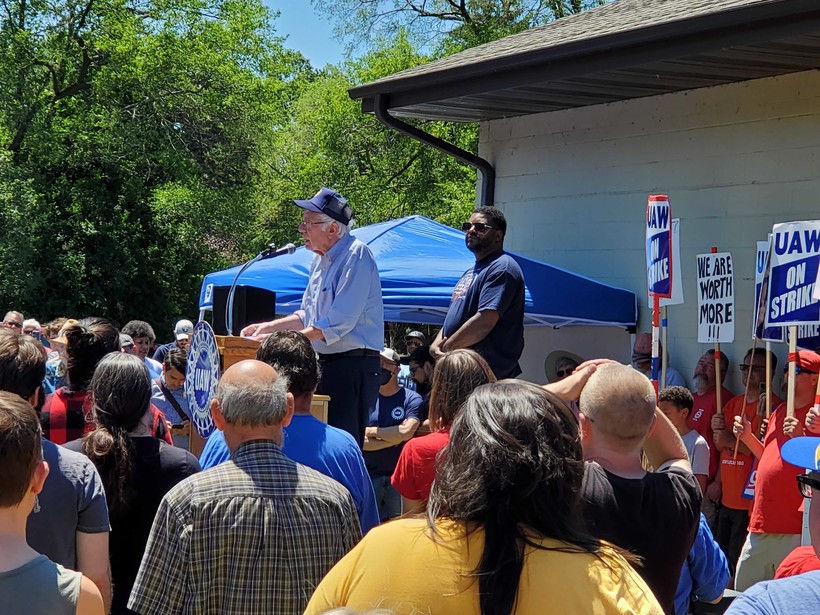 U.S. Senator and former presidential candidate Bernie Sanders speaks to a crowd outside the headquarters of United Auto Workers Local 180 in Mount Pleasant on Friday, June 17, 2022. Sanders came to Racine County to speak to CNH Industrial workers who’ve been on strike since early May. Christine Hatfield/WPR

U.S. Senator and former Democratic presidential candidate Bernie Sanders came to Racine Friday to show support for striking CNH Industrial workers. Members of United Auto Workers Local 180 have been on strike since early May and continue to picket outside the CNH Industrial plant where Case tractors are made.

The union says it’s fighting for better pay and better working conditions. More than a thousand members are on strike at CNH locations in Racine and Burlington, Iowa.

In an approximately 15 minute speech outside the local union’s headquarters to a crowd of a few hundred people, Sanders said the striking workers are part of a larger fight against corporate greed.

“The time is long overdue to understand you can’t have it all,” Sanders said. “You can’t crush people. You can’t crush families. People who have worked for you have made you huge amounts of money. You’ve got to treat them with respect and dignity.”

Sanders said the union members were “sending a message to working families all over this country.”

“You’re fighting to be treated as human beings, so that you can have the time to spend with your kids and your parents,” Sanders said. “That’s all you’re asking for. It is not a whole lot.”

The strike is part of a spate of nationwide union action during the COVID-19 pandemic, including strikes by Kellogg’s workers and unionization efforts at Starbucks across the country, including in Wisconsin.

Sanders addressed many of the complaints of union members, including 12-hour work days and forced overtime.

“We’re talking about workers here at CNH who have made enormous sacrifices during the pandemic, not being able to spend quality time with their families, or even getting enough rest, before they have got to go back to work,” Sanders said.

Sanders said the company needs to come to the bargaining table to negotiate in good faith with the union. He called the hiring of replacement workers “disgraceful.”

In a statement in May, CNH said it was working to reach an agreement with the union. The company did not immediately respond to a request for comment.

Union member Paul Trudeau was in attendance at Sanders’ speech. He said he’s been working for CNH since 2008 and said conditions are unsafe.

“I’ve seen it get as hot in there as 97 degrees and nobody gets sent home,” Trudeau said. 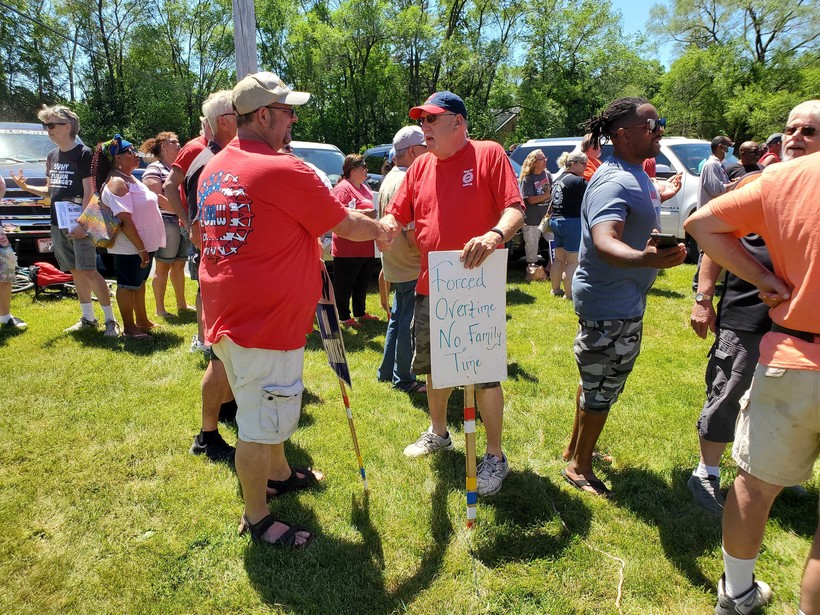 Paul Trudeau, right, speaks with a fellow attendee of a Bernie Sanders speech in Racine County Friday, June 17, 2022. Trudeau said he’s worked for CNH Industrial since 2008, and that the company hasn’t been fairly bargaining in an ongoing negotiation process. Christine Hatfield/WPR

He said three union members died from COVID-19, and relayed the story of a worker who came back after months in the hospital, but ultimately had to take Social Security Disability Insurance benefits instead.

“It is respiratory and she, all of a sudden she was out of wind,” Trudeau said. “COVID has affected a lot, but they still want you there.”

Yasin Mahdi is the president of United Auto Workers Local 180, which represents CNH workers. He said the wages and benefits the company offers are stuck in the past.

“A step of good faith would be for the company to come with wages and benefits that are commensurate with 2022,” Mahdi said. “After the company tried to bargain with the members individually, I told the members exactly what the company had on the table, and that just infuriated them even more.”

Mahdi said negotiations earlier in the week with the company had failed, but he said Sanders’ visit would provide a morale boost for the striking workers.

“The company really needs to get serious if they want an agreement,” Mahdi said. “If they don’t, that’s fine, too. We’re here for the long haul.”

“Solidarity is the most important thing right now — hanging together as a giant family, because we are family,” Trudeau said.