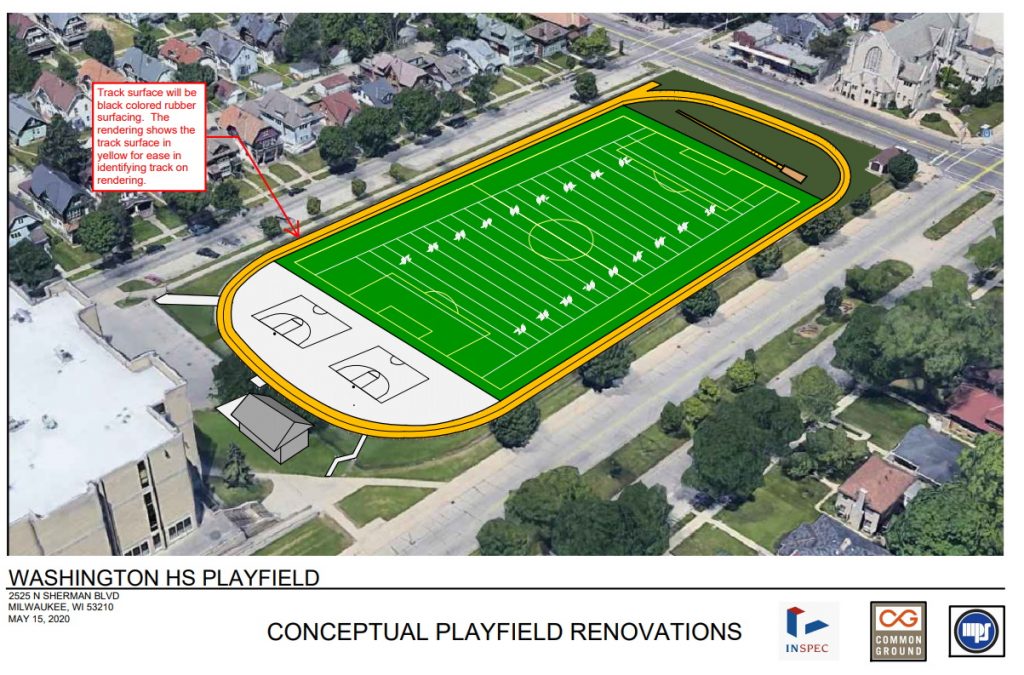 Conceptual rendering of a synthetic field at Washington High School. Image from MPS.

Depending on how you look at it, the Historic Preservation Commission was presented with a complicated decision or an incredibly simple one.

“The reason that we have a big audience for this is going to be clear shortly,” said Jacqueline Drayer, a contractor functioning as a commission staff member.

She recommended the appointed commissioners reject the synthetic field, planned for the corner of N. Sherman Blvd. and W. Center St.

“The Sherman Boulevard Historic District preservation guidelines specifically say regarding landscaping: use traditional landscaping, fencing, siding, paving, and street lighting that is compatible with the character and period of the district. Avoid introducing landscape features, fencing, street lighting or signage that are inappropriate to the character of the district,” said Drayer. “The commission and staff have a tradition of recommending against Astroturf at this site.”

“The problem I have with this recommendation is that I don’t know that this is classically landscaping. This is a purpose-built athletic field,” said Alderman Robert Bauman, the Common Council appointee on the commission. “This is a different animal than landscaping in my judgment.”

Get a daily rundown of the top stories on Urban Milwaukee
“I don’t think that this could be qualified as landscaping,” said Commissioner Rafael Garcia.

“Today is a victory for our children,” said Alexander Hardy of Common Ground Southeastern Wisconsin. He said the current field has numerous holes and flooding issues.

Common Ground has raised more than $862,000 to support the $2.3 million project. MPS will cover the remainder. The proposal includes not only a new dual-use football and soccer field but also a new, 400-meter rubberized track, two half-court basketball courts and a storage shed. It would also include a new stormwater management system designed to capture runoff.

The field would be a newer version of ones already installed at other MPS facilities, including Bradley Tech High School, Barack Obama School of Career and Technical Education and South Stadium.

According to a consultant, the field would have a base of sand and rubber. The carpet surface would last for 12 to 13 years, and while the underlying base and stormwater system are costly to install, they can be reused.

The school building to the south was constructed in 1916 by the firm of Van Ryn & DeGelleke. “Beautiful example of English and Elizabethian Revival architecture,” said Drayer.

The commission has found living things worthy of designation in the past, only to be overruled by the Common Council. In 2019, the commission ruled the Kiley tree grove at the Marcus Center for the Performing Arts was a historically-significant part of the building and shouldn’t be removed. The council overruled the commission on appeal and the grove was removed.