By Terry Falk, Wisconsin Examiner - Jan 10th, 2022 11:46 am
Get a daily rundown of the top stories on Urban Milwaukee

A sign promoting the civil rights of disabled students was removed from a classroom in a Waukesha school during winter break, following a directive from the Waukesha school administration instructing custodial staff to take down signs it deemed examples of prohibited political activism. The sign shows Lydia X.Z. Brown, an autistic adult and a disability rights activist and lawyer in a T-shirt with the words “Disabled & Proud.” The caption reads “We, the Future, are Building Disability Justice.” 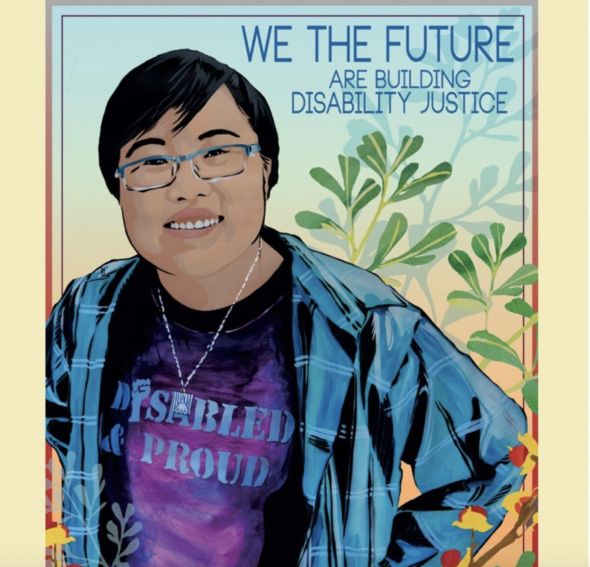 At a Jan. 4 school board meeting, high school student Samuel D’Amico stated that signs were taken down at West High School that are clearly protected under state and federal law. If any signs are allowed to be displayed for any approved student group, all signs for all approved groups must be allowed. But at West, signs for the Hispanic Club, Black Student Union, Gay-Straight Alliance and the Equity and Equality Club were removed.

In August, Waukesha school officials banned all political signs displayed in district schools. Originally the prohibition was directed at racial conflicts and targeted primarily with Black Lives Matter and the pro-police, The Thin Blue Line flags and posters. The ban then expanded to include signs for LGBTQ students. 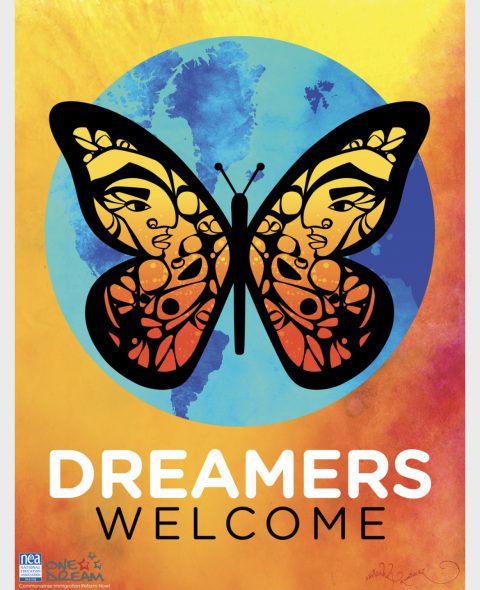 A sign supporting Dreamers that was taken down at Waukesha South High School. Photo courtesy of the Alliance for Education in Waukesha/Wisconsin Examiner.

School administrators later returned the disability justice sign to the teacher and confirmed that taking down the sign was a mistake. D’Amico stated that a public address message at West announced that the sign was taken down in error.

The prohibition of the LGBTQ signage was never codified in writing according to Laura Pinsoneault, a spokesperson for the Alliance for Education in Waukesha, a citizen group that is challenging the ban on signs.

School board members noted at a November meeting that since the ban on signs went into effect, conflicts and incidents of bullying have increased. Taking down signs supporting racial minorities and LGBTQ students could be interpreted by some students as a green light to disparage students who are part of marginalized groups. And those students say they have become targets of bullying. The district, they told the school board, is enabling a culture of bullying.

Suspended teacher will not back down 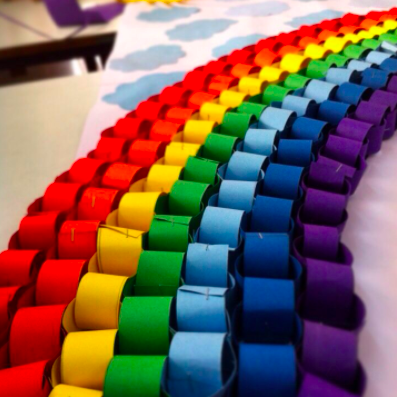 A rainbow chain similar to one removed from a classroom in Waukesha. Photo courtesy of Alliance for Education in Waukesha/Wisconsin Examiner.

Sarah Whaley, special education kindergarten teacher at Summit View Elementary, was given a one-day suspension on Dec. 8 for flying a rainbow Pride flag in her classroom in support of LGBTQ students. She had been repeatedly told to take down the flag but she refused. When she returned from the suspension, the flag had been removed. She is contesting the suspension through the teachers’ union.

On Dec. 17, students and staff throughout the district dressed in rainbow colors in support of Whaley. Some parents were upset with the display. One parent said in a social media post that “teachers [are] dressing like buffoons.” The administration immediately sent out a memo reminding staff members of the district’s dress code, but took no action against any perceived violation. “Please review the dress code policy that applies to you, and be cognizant of it as we return in January 2022,” the memo advised.

The memo also instructed staff members “If you still have any signage in your classroom or work area that is political, disruptive to learning, and/or advocates outside the scope of the curriculum, please remove it prior to winter break. Should you not, it will be removed for you over winter break.” No written document is known to state what constituted prohibited signage and the custodial staff were given only verbal instructions. The Alliance has been collecting photographs of a wide variety of signs that were removed. Some signs that were taken down in one building were left posted in other school buildings.

After her first flag was taken down, Whaley posted a new sign which read, “The district liked my flag so much they decided to borrow it. But the truth remains. You Belong! You are loved. You are supported. You are welcome. You are important. You are beautiful. You matter.”

Just before winter break, she posted a new sign: “Happy Holidays. There is no need to check this room for signage. There are no signs endorsing politicians so I have nothing political. There are no disruptive signs. As we have discussed in previous meetings. Plenty of learning happening here. All of the signs are advocating within the Second Step curriculum around empathy. Don’t worry…no sports signs either…cause those are outside of the curriculum.”

Those signs were taken down during the break along with several other signs she posted. One was a Black Lives Matter poster with “Matter” covered over to now read “Black Lives Are Sacred, Beautiful, Worthy.”

After winter break, Whaley was out with COVID-19. She says she will put up new signs in her classroom when she returns. She says she has heard that her suspension has made some staff members more cautious, but others might be emboldened. Because of a statewide teacher shortage, the administration has limits on the number of teachers it can suspend.

Complaints to the Department of Education, Office of Civil Rights and DPI 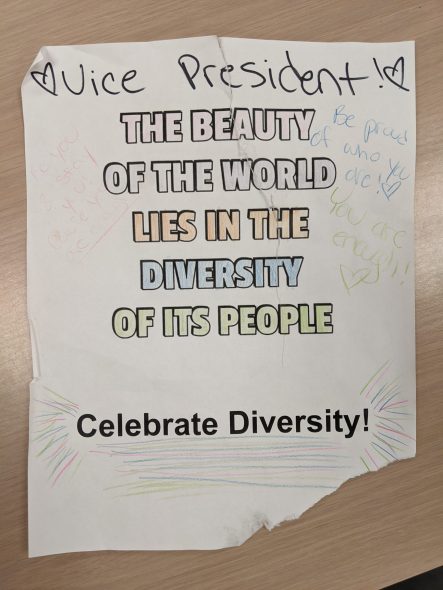 Laura Pinsoneault, a spokesperson for the Alliance, filed a complaint with the United States Department of Education, Office of Civil Rights on her own. The department states on its website.

“The Supreme Court has upheld the right for LGBTQ people to live and work without fear of harassment, exclusion, and discrimination – and our LGBTQ students have the same rights and deserve the same protections.”

Pinsoneault filed complaint on Oct. 30 and sent a follow-up letter to Mellissa M. Katt at the Office of Civil Rights in Chicago on Nov. 14. Both letters outline the series of actions taken by school administrators in Waukesha. Pinsoneault says that the agent she is working with has yet to produce “a finding of fact.” Typically, these cases take months to develop and resolutions often take longer.

Under Wisconsin Law, 118.13, discrimination in schools is prohibited including discrimination based on sexual orientation and race. The Wisconsin Department of Public Instruction (DPI) outlines its interpretation of that law on its website. Pinsoneault says that neither she nor the Alliance have officially filed a formal complaint, but she is aware that individuals in the Waukesha district have contacted DPI.

Legal action is the final action the Alliance might take, but Pinsoneault says the group would prefer to sit down with Waukesha school administrators and reach a mutual understanding. The group outlines this in a new letter to the district.

New letter by the Alliance

The Alliance has been collecting signatures for a new letter it will deliver Monday to Superintendent James Sebert. The group’s previous letter delivered to the district on Oct. 28 had 200 signatures. By Friday morning the Alliance had again collected 227 signatures on its new letter.

The letter expresses the group’s concerns:

The letter further states that the Alliance will take the following actions:

If there is no progress on talks with the district, the Alliance hints at legal action under public laws and the constitutions of the United States and Wisconsin.

How this will all end 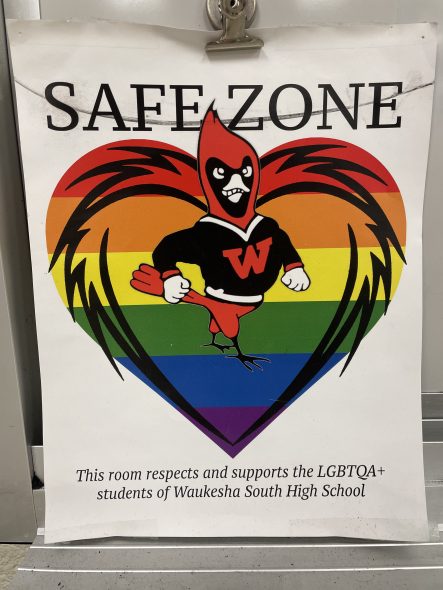 When conflicts erupted last spring between Black Live Matter proponents and law-and-order advocates, the Waukesha administration decided to ban all public displays of political speech. The district wound up casting a wide net that ensnared disabled and LGBTQ-positive students and staff.

The ban on signs and the suspension of DELT has not achieved its goals. Suspension of a teacher has not stopped signs and banners from going up. Bullying appears to be a growing problem and the district is having trouble controlling it. So far, the administration has chosen to treat bullying as a disciplinary problem rather than an outgrowth if its larger human-relations problem. Meanwhile, the very mechanism to deal with this conflict, the District Equity Leadership Team, has been suspended.

Waukesha’s school board became more conservative after elections last spring that centered on the issue of in-person versus virtual learning during the pandemic. The new board is also concerned about so-called critical race theory and other cultural issues. In this newly politically charged atmosphere, school administration has been reluctant to take on issues involving race, sexuality and gender identity..

Board member Greg Deets. who is up for reelection in April, has been the most critical board member of the administration’s sign policy. That election will likely be seen as a referendum on the issue.

Meanwhile, advocates await a legal or arbitration ruling on the suspension of Sarah Whaley, results from an investigation by the Office of Civil Rights and other potential legal action.

An immediate concern for the district is staffing for the coming year. . Deets stated at a Nov. 10 board meeting that the negative publicity was going to have a negative impact on the recruitment of teachers.

At the Jan. 4 Waukesha board meeting, Dave Richman, a parent of a college student soon to enter the teaching ranks, unscored the problem: “Waukesha is not on his list,” he said of his son, who is a graduate of the Waukesha school system. Richman’s son told his father, “I just don’t like what I see.”

Both sides have dug in with no resolution in sight. Black, brown and LGBTQ+ students are unlikely to retreat into the shadows. 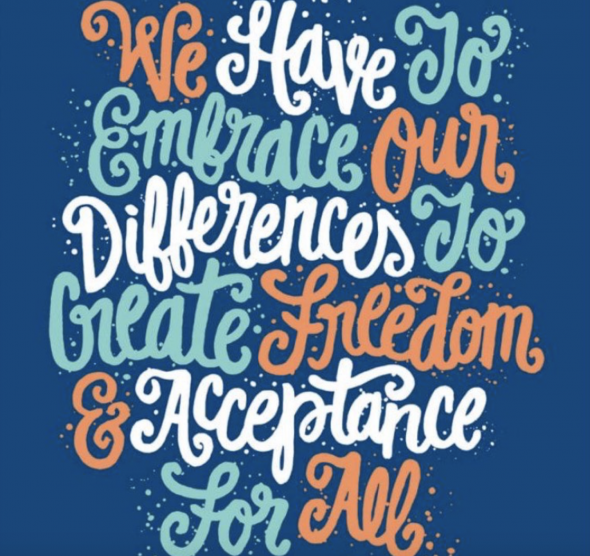 On Friday, Jan. 7, teachers were instructed to read a one-page memo to their students. The memo states: “We want to be clear that bullying, discrimination and harassment will not be tolerated within the School District of Waukesha.” The sign ban continues. The district has not announced any further plans to address the problem.

Superintendent Sebert did not respond to the Examiner’s request for comment.

Sarah Whaley offers a solution, but it may not be accepted by the administration.

“As a kindergarten teacher, I believe it is never too late to learn new information, reassess and admit when you have made a mistake,” she says.

“There is always time for us to say, ‘Whatever the intentions were originally, this equity sign ban has caused damage to our students. And so, we listened, and we learned, and we are going to reverse this because we need to keep our students safe.’”

Signs supporting many student groups taken down at Waukesha schools was originally published by the Wisconsin Examiner.