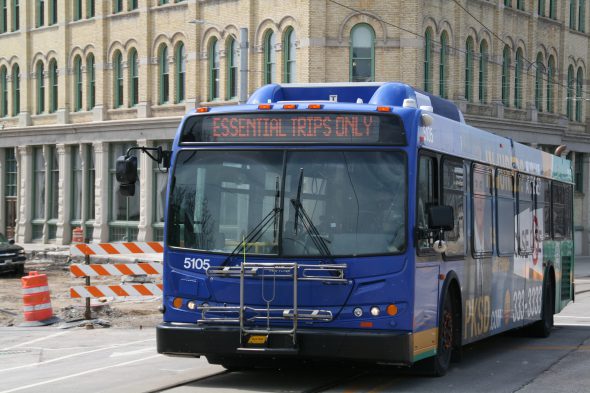 The Milwaukee County Transit System (MCTS) is suspending bus service on the county’s Freeway Flyer routes due to an ongoing staffing shortage.

The transit system has struggled to retain operators for the past decade, causing fluctuating levels of staffing. The problem is not unique to Milwaukee. Transit systems across the country are struggling with operator shortages.

In June 2021, the agency announced that it would not be providing shuttle service to Summerfest because its staffing had dropped to a low last reached in 2014 and the annual music festival had been rescheduled for the fall – a busy time of year for the transit system.

Now the transit system is reporting that the operator shortage is forcing the suspension of the following Freeway Flyer routes:

MCTS is on track to hire and train enough drivers to bring the service back in March, said Kristina Hoffman, director of marketing and communications. “We apologize for the inconvenience caused by the changes in service and encourage Freeway Flyer passengers to ride the regular bus service until the Flyers return on March 7th.”

Riders can still access regular bus service at the park and rides they used to catch freeway flyers, the agency said.

The Freeway Flyer and Summerfest cancellations are not the only disruptions to service. In July, Urban Milwaukee reported that MCTS had been unable to staff approximately .4% of its scheduled service. But this tiny percentage translates to 2,400 missed hours of bus service.

MCTS has taken a number of steps to try to address the staffing shortage, with increased training pay, $1,000 sign-on bonuses for operators and $2,000 sign-on bonuses for mechanics, another category for which MCTS has a shortage. It tripled its advertising budget for job postings, held virtual job fairs and is rolling out a second phase of a marketing campaign called “What Drives Me” to encourage job applicants.

The biggest challenge has not been hiring new operators, but retaining those hired. In 2019, the employee turnover rate was 20%. In 2020, the turnover rate dropped to 12%, but the pandemic made it more difficult to hire new operators. The agency had to cancel a training class in April of that year.

Only a small percentage of the agency’s staff turnover comes from retirements. The majority is from drivers quitting. As of July 2021, nearly half of MCTS bus operators had less than five years on the job.

Donnell Shorter, a union steward with the Amalgamated Transit Union Local 998, previously told Urban Milwaukee that many drivers are leaving because they are simply burned out by the job. It’s the schedule – which is worsened by the driver shortage – and the working conditions.

“At some point it became a job and not a career,” he said.