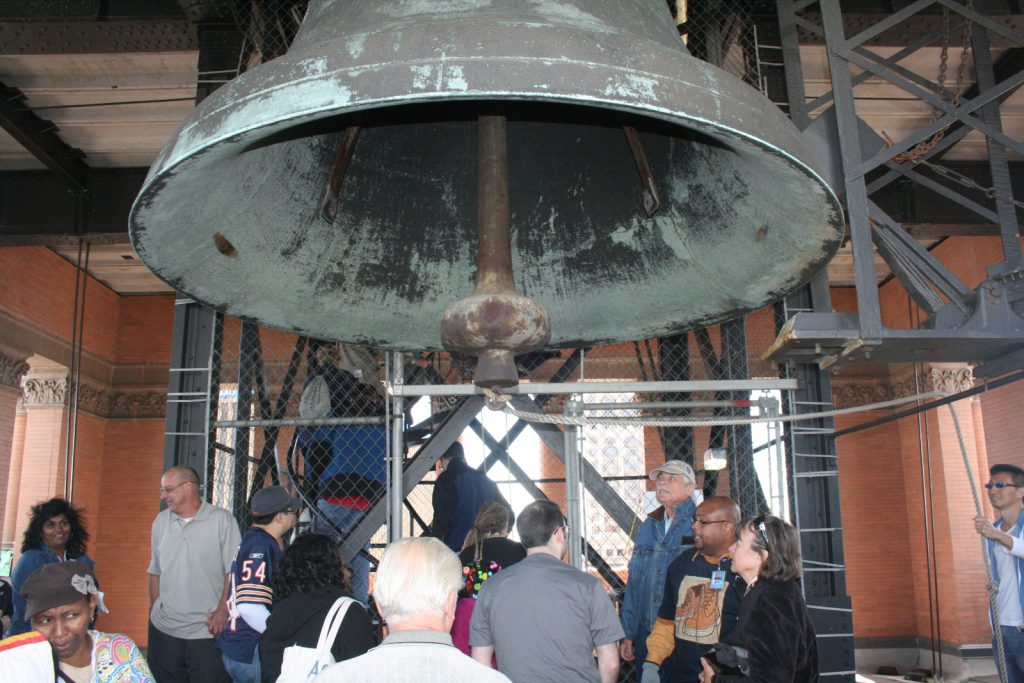 The Solomon Juneau Bell atop Milwaukee City Hall is a sonorous giant. It is the 11th largest bell in North America, and the third largest ever cast in the United States of America. It took shape on October 26th, 1896 at the factory of the Campbell Centennial Bell Foundry, located on Barclay Street, about a mile and a quarter to the south of its home for the last 125 years. The E-flat giant weighs 20,505 pounds, consisting principally of 77 per cent Lake Superior copper and 22 percent East India tin. Additional metal came from decomissioned city fire bells and spare change from the pockets of Common Council members who attended the casting.

The bell’s first ringing was at the stroke of midnight on New Year’s when it struck 1-8-9-7 to mark the occasion. A century-and-a-quarter later, it honored the tradition again at 11:30 p.m. December 31st, 2021 when Acting Mayor Cavalier Johnson ascended the tower to ring in the New Year 2022 as part of his exhaustive tour of the city’s infrastructure. (Two days later Johnson announced he had contracted COVID-19, as Urban Milwaukee has reported.)

A Message for the Ages

The bell bears the following inscription:

When I sound the hour of the day,
From this grand and lofty steeple,
Deem it a reminder, pray,
To be honest with the people

This summer I was contacted by Sue Medford of the Milwaukee-based PianoArts who lamented the lack of a good recording of the Solomon Juneau, which she hoped to incorporate into her curriculum. The incessant ambient noise of the city, absent in 1-8-9-7, rendered a recording from the street unacceptable. Since 2017 I have assisted The Bells of Milwaukee, Inc. in advancing the non-profit’s mission of promoting the city’s rich bell heritage. President Russ Klisch agreed with me that a video of the bell would be ideal. This October Michel Cros was commissioned to create it, utilizing a drone. The video, narrated by City Clerk Jim Owczarski, makes its debut here at Urban Milwaukee. For more information on The Bells of Milwaukee, Inc., please follow its Facebook Page, where a new project is to be announced soon.