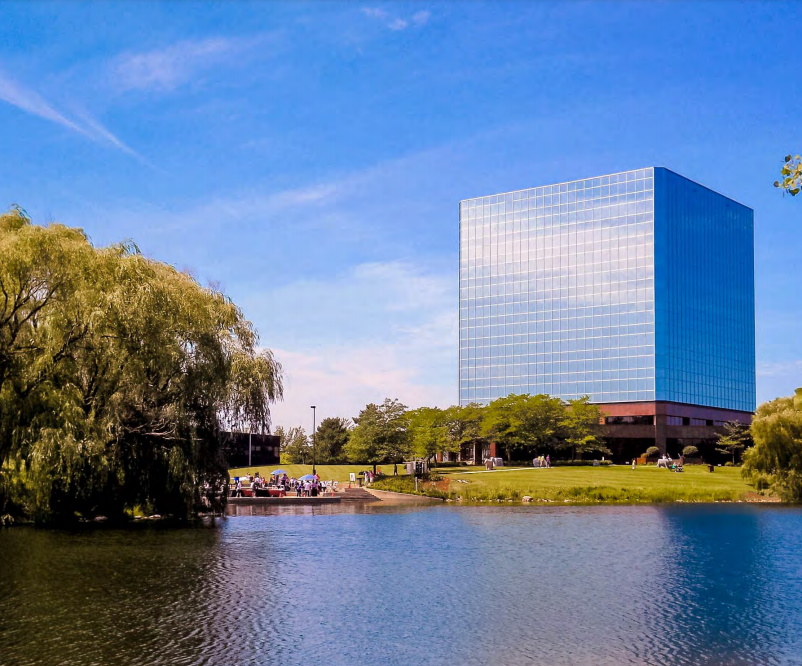 One Park Plaza. Image from JLL.

Douglas Dynamics, a manufacturer of work truck equipment, continues to grow. And that growth has the company leasing space for its upper management in a far northwest side business park to supplement its headquarters at N. 76th St. and W. Calumet Rd.

The publicly-traded company, with a market cap of approximately $900 million, is the leading manufacturer of snowplows and ice removal equipment.

And now its upper management team is based out of a 17,983-square-foot office suite in the One Park Plaza building, 11270 W. Park Pl. The company, with the assistance of Mohr Partners, leased an entire floor in the building.

The move, as first reported by Ashley Smart, frees up space at the Calumet Rd. manufacturing campus for other office users, including engineering, marketing and human relations employees.

“As a company we evaluated different submarkets and during the pandemic we were doing the exact opposite as most companies, continuing to grow our business and leadership team. Ultimately, we choose Park Plaza based on location, easy access for our executive team, and its amenities,” said vice president, controller and treasurer Bob Young in a statement.

Originally built in 1984 as part of the Park Place office complex, the 12-story building was sold in 2020 to New York City-based Sovereign Partners for $5.75 million.

Get a daily rundown of the top stories on Urban Milwaukee
With nearly 200,000 square feet of leasable space, other tenants include the corporate offices of Manitowoc Co. and A.O. Smith.

Listed with Jones Lang LaSalle, the building has a reported 40,139 square feet of available space. It was renovated in 2020 and has a new fitness center, training facility, tenant lounge, renovated common areas and a year-round golf simulator.

In 2019, Douglas bought a car dealership adjacent to its W. Calumet Rd. facility, allowing it to repurpose the buildings, some 52,000 square feet in total, for both manufacturing and office use. It planned to add 50 employees as part of the expansion and reported having 300 employees on-site and 1,600 companywide.

A Houston-based company plans to construct a micro-hospital near Milwaukee Mitchell International Airport.

Nutex Health is developing a 22,073-square-foot facility, which will include up to eight inpatient beds and 10 emergency room beds. The company anticipates serving between 10 to 40 patients per day and offering a full range of emergency services, including MRI and CT scanning, a “moderate complexity” laboratory, full pharmacy, advanced cardiac monitoring and ventilators.

The Nutex hospital has an estimated cost of $13 million according to an application filed with the city. Nutex anticipates employing 50 people at the facility. A 69-stall parking lot would wrap the building.

“We are thrilled to partner with the Village of Greendale on this historic, transformational project on the nearly 15-acre site of the abandoned Boston Store at Wisconsin’s largest shopping mall. We thank the Village for its confidence in Barrett Lo and and look forward to working with the community to bring this project to life.”