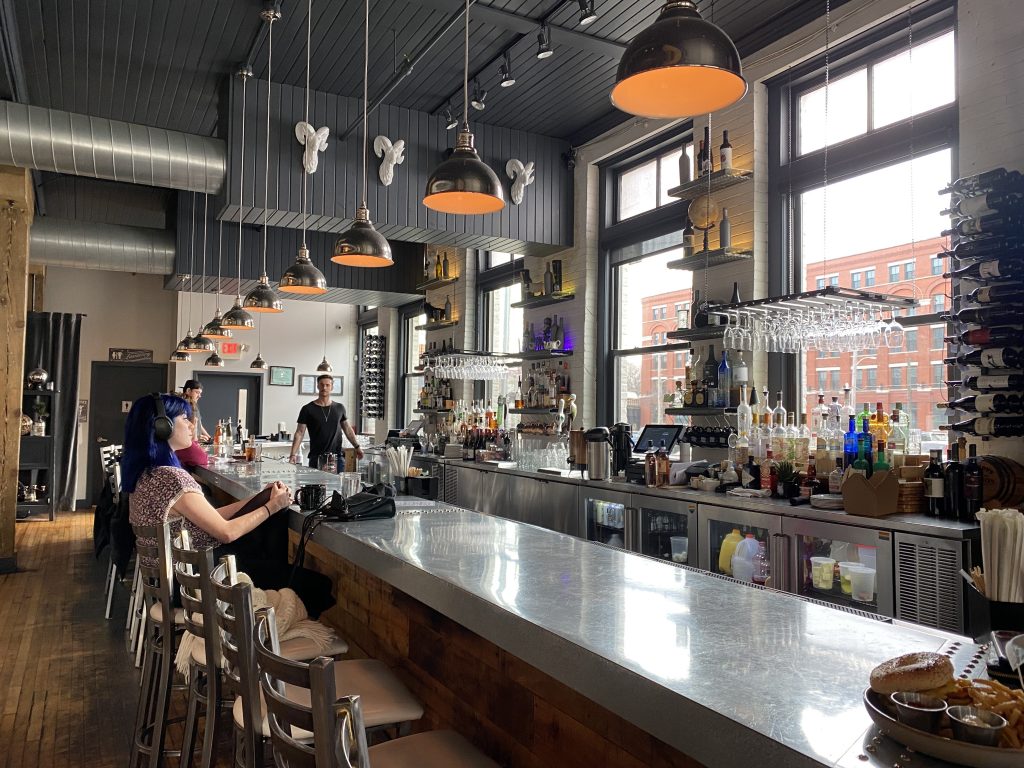 The last thing I noticed when I left Black Sheep was the multi-colored, eye-catching Pride flag that hung over the door. The first thing I noticed was the happy vibe that filled the wine bar and restaurant in Walker’s Point. I was glad I had the foresight to make a reservation for our Sunday brunch, despite grumbling about the $25.00 nonrefundable deposit for no-shows, because with the exception of seats at the bar, every table was taken.

Our server led us to a back corner table, all the better to people-watch in a restaurant where everyone appeared young and stylish. My group of three was neither, but our Mimosas and Bloody Mary’s allowed us the illusion that we were slightly hipper than when we first arrived. These were potent drinks, the Mimosas mostly Cava with a splash of orange juice and the Bloody heavy on the vodka.

That fantasy unraveled when our server presented the menu, four bar codes, one each for dinner, lunch, brunch, and dessert. I’m no Luddite, but, in my experiences in local restaurants, this was a first, perhaps the new wave of post-Covid menu presentation. Yet the simple act of taking a photo with my iPhone and clicking on the Safari icon that magically appears for a few seconds, was a no-brainer after a brief orientation by our server.

It was hard to decide among a dozen brunch entrees, so we again turned to our server, this time for recommendations. I reluctantly bypassed the Brunch Poutine, crispy breakfast potatoes, country sausage gravy, white cheddar cheese curds, and fried eggs, and chose the healthful Hipster Toast with avocado, tomato, pickled red onion, radish slices, and fried eggs served on grilled sourdough. It needed more of the elusive avocado hiding under the eggs and a couple slices of thick bacon to upgrade it to a dish I would order again.

My companion’s Risotto Madame had pulled country ham mixed in the risotto along with cheddar and gruyere, an unusual take on the classic. Pickled mustard seeds added sparks and sunny-side-up eggs coated with hollandaise finished the dish.

Our third entrée, Chicken and Waffle, left no doubt that my companion who ordered it would not leave the table saying “More.” It was delicious and hearty. The fried buttermilk-marinated chicken with its crunchy crust remained juicy and tender despite being buried underneath an ample serving of sausage gravy filled with chunky pieces of meat. The chicken was served on top of the waffle and was accompanied by both maple syrup and butter. This salty, sweet, crispy, buttery dish hit all the right notes, an entrée worthy of another visit to Sunday Brunch at Black Sheep.

We finished with good strong coffee and a surprise, almond-flavored biscotti with chocolate frosting. We felt special when the server brought a second plate of that delicious and unexpected biscotti, an ideal companion to our coffee.

When two friends and I came for lunch a few days later, there was ample time to observe the bones of the restaurant as there were few customers on a Tuesday. The decor does exude a hip vibe: exposed painted brick walls, hardwood floors that appeared to be original, a high ceiling, and a metal-top bar that stretched the entire length of the restaurant.

On Tuesdays, Shareables are half price, an offer we did not take advantage of, despite the tempting Crispy Brussels with Caesar Dressing, a half-pound of Applewood smoked bacon, which I should have ordered and taken home in a to-go box, and a Beer Cheese Mac made with Spotted Cow and three cheeses.

We stayed with Between the Bread and enjoyed our sammies, the Nashville Chicken, a Black Sheep Burger, and the Salmon BLAT, salmon with bacon, lettuce, avocado, and tomato. The chicken had a delicious spicy crust, the heat balanced by the pickled red onion, and underneath, several house-made sliced pickles. There was barely a hint of the superfluous Buttermilk Ranch sauce and I couldn’t detect the Nashville Hot Sauce mentioned on the menu. Neither detail mattered, given the spicy succulence of the chicken and overall deliciousness of the sandwich.

All the sandwiches were served on toasted brioche buns and came with a small salad dressed with a light vinaigrette. The salmon was tender, not overcooked, as often happens in a bar sandwich, and the burger, according to my companion, was just about perfect. “They know what medium-rare is,” was her comment, along with her delight at the char flavor from the grill.

If you want dessert, there are currently four choices: Flourless Chocolate Cake; Mom’s Key Lime Pie; Horchata Tiramisu; and the one I couldn’t resist, Nutella Puff Pastry. This proved to be a fine way to complete my lunch. It was a warm puff pastry shell that oozed Nutella and to gild the lily, had a generous coating of dark caramel sauce and powdered sugar.

I went to Black Sheep with no expectations and left both times surprised and delighted. Now when someone asks me to name my favorite wine bar that also serves food, I can answer the question. 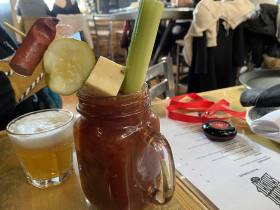 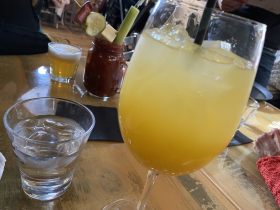 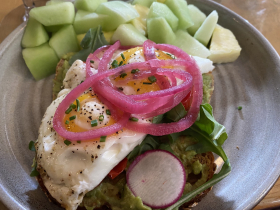 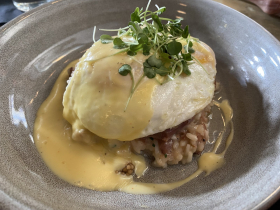 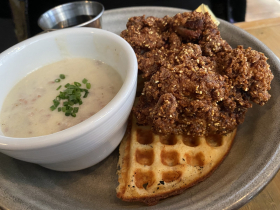 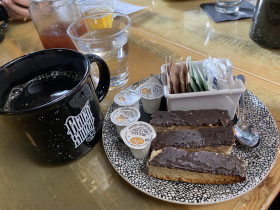 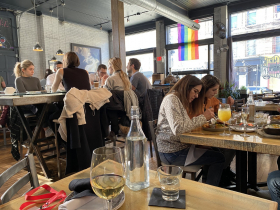 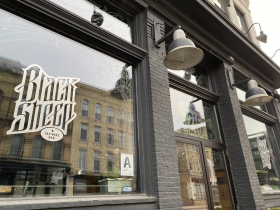 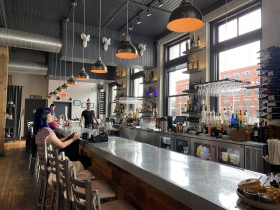