Assembly minority leader Gordon Hintz's decision to step down the latest of many leadership changes. 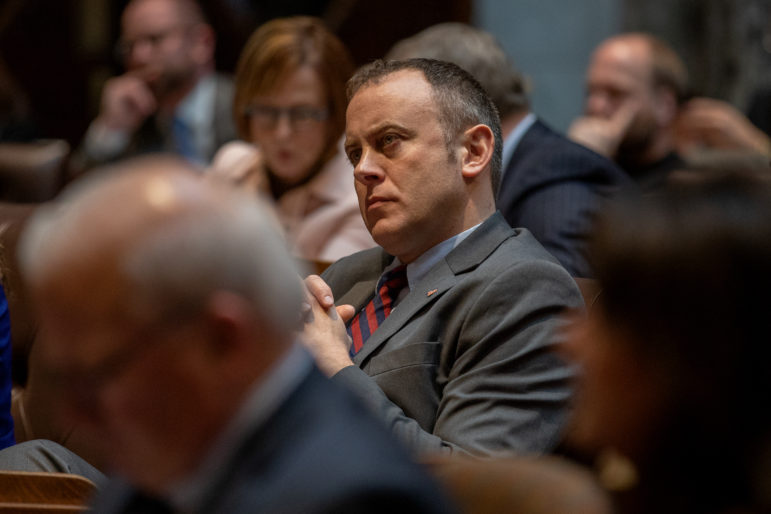 The Assembly minority leader won’t be spending the next year on the road, making and taking non-stop fundraising phone calls, interviewing and recruiting Democratic candidates for Nov. 8 elections and working on strategy with aides to Democratic Gov. Tony Evers, who is up for re-election next year. Hintz announced that he will step down next month as leader of the 38 Assembly Democrats, who will soon pick a new leader.

With that announcement, Hintz, who is 48,  posted a waving-goodbye photo that suggests he also won’t seek re-election Nov. 8. He has represented Oshkosh, where he grew up, in the Assembly since 2007 and served as his party’s Assembly leader since 2017.

“After choosing to seek another term in 2020, I was committed to serving as Assembly Democratic leader through the 2021 state budget process and redistricting,” said Hintz.  “I want to have more time for my district and my family, which includes two children under the age of 5.”

Hintz’s decision was the latest through the revolving door of Democratic leaders in the Legislature:

-Senate Democrats have had four leaders — Mark Miller, of Madison; Sen. Chris Larson, of Milwaukee; Jennifer Shilling, of LaCrosse, and Sen. Janet Bewley, of Mason — in the decade since their party last control of the Legislature in 2010 elections.

-A former Senate Democratic leader, Jon Erpenbach, of West Point, announced he would not seek reelection next year. Erpenbach, 60, will retire after serving 24 years in the Legislature.

-The next Assembly Democratic leader will be the third in five years and can only be assured of having that leadership job until January, when the next legislative session begins.

After the Nov. 8 elections, Assembly Democrats will reorganize, which could include electing new leaders for the 2023-24 session. The party’s next leaders could depend on whether it picks up or loses Assembly seats on Nov. 8.

Unlike Democrats, Republican legislators had only two leadership changes in the decade after 2011. Rep. Robin Vos was elected speaker in 2012 after Jeff Fitzgerald retired. Sen. Scott Fitzgerald led Senate Republicans for decades until his November 2020 election to Congress. Senate Republicans then chose Majority Leader Devin LaMahieu to replace Fitzgerald.

Vos said he respected Hintz, although they disagreed on major policy issues, and acknowledged the “significant” demands of being a legislative leader. “I respect [Hintz’s] decision to focus on his family,” Vos added.

Hintz’s exit opened the door for Rep. Greta Neubauer, of Racine, a member of the budget-writing Joint Finance Committee, to be the party’s next Assembly leader. Rep. Mark Spreitzer, of Beloit, considered seeking the post, but decided against it. Spreitzer is now Democratic caucus chair, the third-ranking leader.

Spreiter praised Hintz. “From standing up for Wisconsin taxpayers against the Foxconn catastrophe to working to keep people safe through the COVID-19 pandemic, Gordon has led our caucus through tremendously challenging times.”

Two other veteran Assembly Democrats — Rep. Lisa Subeck, of Madison, and Evan Goyke, of Milwaukee, the senior Assembly Democrat on the Finance Committee — passed on trying to replace Hintz.

Fourteen of the 38 Assembly Democrats are from Milwaukee County; eight are from Dane County.

The elections of Neubauer and a new assistant leader represent a new generation of Assembly Democrat leaders. Neubauer, 30, won a special election and then a full term in 2020; Spreitzer, 35, was elected in 2014. Both are members of the Legislature’s LGBTQ caucus.

The lineup of Democratic leaders could change yet again if Bewley, who got only 51% of the 2018 vote, is defeated or chooses to not seek reelection. Donald Trump got 59% of the 2020 presidential vote in the 7th Congressional District, which includes Bewley’s district.

Another Democrat who has not yet said she will seek re-election is first-term Sen. Janis Ringhand, of Evansville, the party’s assistant leader. If Ringhand retired, Spreitzer would be the leading candidate for her Senate seat.