How To End Prison Gerrymandering

It is particularly harmful to cities like Milwaukee. From Matt Rothschild's new book, 'Twelve Ways to Save Democracy in Wisconsin.'

In Waupun, you’re being “represented” in the Wisconsin legislature by two conservative white Republicans, representative Michael Schraa and senator Dan Feyen, instead of by the Black Democrats from your district, representative David Bowen and senator Lena Taylor. 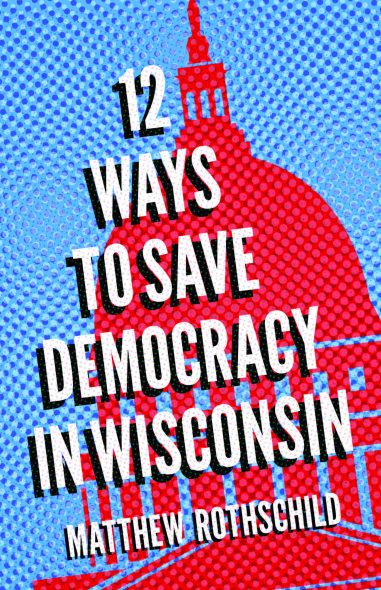 Twelve Ways to Save Democracy in Wisconsin by Matthew Rothschild.

On top of that, the census helps determine the flow of federal dollars to local districts, per capita. Wisconsin has one of the nation’s highest rates of Black incarceration, so predominantly white Waupun is getting more money, and Milwaukee, which is about 40 percent Black, is getting less.

The district that Bowen and Taylor represent has the highest incarceration rate in the state. Many of their former constituents are sent off to Waupun or other prisons around the state that are in rural, white areas.

Jerome Dillard of ExPO points out that rural white communities are getting extra resources because they have a high prison population. “Dodge County is huge when it comes to prison gerrymandering,” he says, rattling off the prisons there: Waupun, Fox Lake, Dodge, and Burke. It’s especially galling to Dillard that prisoners are counted as living there even after they’re out. “If you leave Dodge [Correctional Facility] in 2021, they get money for you for the next nine years. You’re a ghost. You don’t live there anymore. You’re not counted in the community you came from and go back to—a community that really needs those resources.”

When the NPR podcast Code Switch looked at prison gerrymandering in Wisconsin, on October 2, 2019, it focused on how the practice denies persons who are incarcerated of adequate representation. Reporter Hansi Lo Wang visited the city of Waupun, where prisoners make up more than a quarter of the population. He interviewed a prisoner named Kenneth McGowan and asked him if he considered himself a resident of Waupun.

“No, not at all,” McGowan said, telling Wang that he’s from Milwaukee and his “mother, father, three sisters, nieces, and nephews” still live there.

The local alderperson who supposedly “represents” the people in the prison is Peter Kaczmarski. Prisoners make up about 76 percent of his district, Wang reported. Wang asked McGowan if he had ever heard of Kaczmarski.

McGowan could use some decent local representation. “The drinking water in prison is horrible,” he said. “When you push the button, sometimes it comes out brown.”

Wang talked to Kaczmarski, who told him he has “never visited Waupun Correctional Institution” and acknowledged that “it’s right down the street from my home.” He added: “You almost have to think for them because you don’t, perhaps, have that day-to-day interaction.”

Prison gerrymandering is part of the representational crisis we’re facing in Wisconsin and around the country. Some other states are doing something about it. In 2020, Colorado, Nevada, New Jersey, Virginia, and Washington all banned it, joining California, Maryland, and New York among the states that have ended this practice.

In 2018, the NAACP in Connecticut filed a pathbreaking federal lawsuit, NAACP Connecticut, et al v. Denise Merrill, et al, challenging that state’s prison gerrymandering. It “violates the ‘one person, one vote’ principle of the Fourteenth Amendment to the United States Constitution,” the lawsuit says. “It impermissibly inflates the voting strength of predominantly white voters residing in certain Connecticut House and Senate Districts. . . .

By counting prisoners in the districts where they are imprisoned instead of their pre-incarceration residences, prison gerrymandering dilutes the votes of residents in their home communities, who are disproportionately African-American and Latino.”

It further notes: “Persons incarcerated in districts far from their home communities have no meaningful connection to the towns in which they are incarcerated Local legislators do not visit prisoners incarcerated in their districts. Consequently, the districts’ representatives do not, in practice, represent these incarcerated persons or perform legislative services for them.”

In February 2019, a district court judge refused to dismiss this lawsuit. And in September 2019, an appellate panel upheld that ruling and sent the case back to district court, saying that claims by the NAACP were “neither frivolous nor insubstantial.”

Here in Wisconsin, in the 2018–19 legislative session, Taylor and David Crowley introduced a bill that would ban prison gerrymandering. It would count prisoners as residing in the communities where they were living “prior to being confined.”

Says Crowley, who is now Milwaukee county executive: “Ending prison gerrymandering is one of the most fundamental things we can do to give people one person, one vote.”

When Colorado was debating whether to ban prison gerrymandering, which it did in March 2020, Republican legislators who opposed it, and who had prisons in their district, claimed that it would be unfair to the communities that house the prisons.

“When you have a prison in the community, it affects the entire community,” said state senator Jerry Sonnenberg, who has four prisons in his district. “To have them counted somewhere else, I think, will do an injustice to the communities that actually holds those prisons.”

It’s an amorphous argument. Of course, having a prison “affects the entire community.” But how? It brings jobs, for one thing, and that’s not a negative. Prisons have often been sold as a rural development strategy for poor towns, though the evidence is mixed on that front.

Some of the possible economic downsides include a small “multiplier” effect, compared to development strategies that might boost other related industries, as Tracy Huling noted in her essay “Building a Prison Economy in Rural America,” in Invisible Punishment: The Collateral Consequences of Mass Imprisonment.

Huling also noted that “the impact of prisons on housing can also cause economic hardships for the poor and elderly in rural communities. Both land and rental values generally increase when a prison siting is authorized by a governmental or corporate entity; however, land values fall once the actual (low) number of locally gained jobs, and associated homeowners, becomes clear. This has the effect of placing additional burdens on poorer members of the community, particularly renters and elderly homeowners.”

She added: “The ‘hidden’ costs of doing prison business can be high for small communities. Local court and police systems are often the first to feel the impact. In many states county or district public defenders are responsible for defending indigent inmates charged with committing crimes (e.g., assaults on guards and other inmates) within state prisons. In low-population counties with large numbers of prisoners, the prisoner share of a defender’s caseload can be quite high.”

According to the Real Cost of Prisons Project, “Over the past 25 years, most prison towns have grown poorer and more desperate.”

So there is some evidence that communities that house prisons do bear some extra costs. But you need to balance that claim against the claims on the other side: prisoners deserve to be counted in the communities that they come from, and those communities are being stripped of resources because prisoners aren’t being counted there. On balance, those claims are much more persuasive.

What about Prisoners Who Are in for More than a Decade?

One of the strongest arguments for banning prison gerrymandering is that it counts a prisoner as living where the prison is located even if that prisoner gets out a month after the census and moves back to his or her home in another community. “About 75% of all people got out of prison within 48 months of entering,” wrote UW sociology professor Pamela Oliver in a December 22, 2016, article titled “How Long Do People Stay in Prison in Wisconsin?” It’s wrong and misleading to count these people as residing in the prison for ten years, which is what the census does.

But what about those who are in the same prison for more than a decade? “About 12% are still in prison after 14 years (168 months); these are usually people with long sentences for very serious crimes,” notes Oliver.

Even with this small population of prisoners with lengthy sentences, the problems of prison gerrymandering persist.