Conservative report asserts, with no evidence, that changes in election law needed.

Recently the conservative Wisconsin Institute for Law & Liberty (WILL) issued a 136 page report on the 2020 presidential election. The report combined two topics.

The first topic was whether there was evidence to support former president Donald Trump’s allegation that voter fraud explained his defeat in the 2020 election. WILL concluded that “there was no evidence of widespread voter fraud.”

WILL’s inability to find fraud should not be surprising, considering the national voting patterns. Compared to 2016, both major party candidates received substantially more votes in 2020, as shown in the graph below. Trump’s problem is that his growth in votes was substantially smaller than Biden’s.

The graph divides voters into four groups: Wisconsin, other competitive states (Michigan, Arizona, Georgia, Pennsylvania, and Nevada), Red states, and Blue states (including all states supporting the Democrat in both years, other than Nevada and Wisconsin). Wisconsin’s switch to Biden was echoed nationwide. 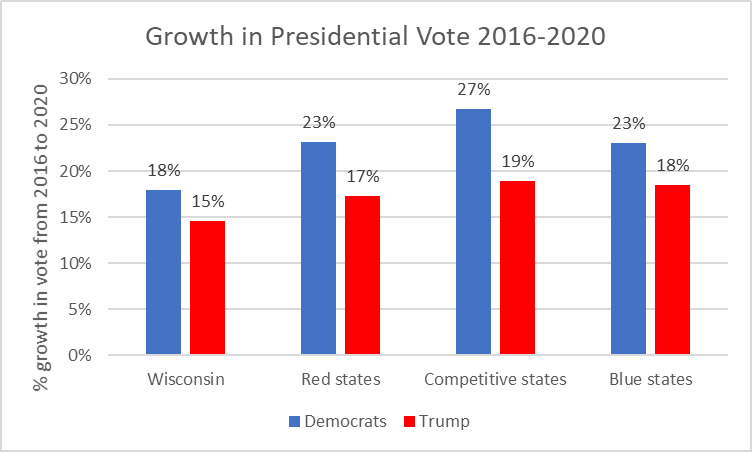 WILL also looked at several other claims such as that Dominion voting machines converted Trump votes into votes for Joe Biden, pointing out that Dominion machines weren’t widely used in Wisconsin. It also “found no evidence of more than one vote being cast in the name of the same voter.”

Unfortunately, having found no fraud, WILL did not stop there. The second topic is an extended attack on the Wisconsin Elections Commission (WEC), claiming “widespread abandonment of proper procedures.”

One issue that WILL criticizes is the jump in the number of voters declaring themselves “indefinitely confined” in order to receive an absentee ballot for every election. According to state law, someone “who is indefinitely confined because of age, physical illness or infirmity” can sign a statement to that effect and receive an absentee ballot elector automatically for every election. At least one clerk suggested that with pandemic lockdowns, every Wisconsin voter could consider themselves indefinitely confined. In a case called Jefferson v. Dane County, the Wisconsin Supreme Court disagreed, ruling that the “determination may be based only upon age, physical illness or infirmity.”

However, the court also concluded that “whether an elector qualifies as indefinitely confined is a determination that individual electors make, not third parties.” WILL argues that “given the substantial increase in the number of such voters, it is almost certain that many voters improperly claimed ‘indefinitely confined status.’” Given that older people and those who are ill or infirm were particularly vulnerable to Covid, the surge in applications is not surprising. Older people and those with infirmities are precisely the ones the law singles out, particularly at a time when vaccines were not yet available.

A second issue that earns WILL’s enmity is the use of drop boxes to submit absentee ballots, flatly stating that “they are, in fact, illegal.” Essentially it argues that anything not specifically authorized in state law is prohibited. Currently, WILL is making that argument in a case called Teigen v. Wisconsin Elections Commission. Groups disagreeing with WILL’s argument include the Democratic Senate Campaign Committee, Disability Rights Wisconsin, Faith Voice For Justice, and the League of Women Voters of Wisconsin.

While state law does not mention lock boxes, it does specifically authorize the use of postal boxes. A lock box serves the same function as a postal box but is arguably safer, since it avoids the sorting process in which ballots are separated from other mail.

WILL’s argument against Madison’s Democracy in the Park, in which election workers were stationed in parks to receive filled-out absentee ballots, is essentially similar: because it was not specifically mentioned, it was illegal. This reflects a very cribbed view of the role the Elections Commission should play in encouraging the use of tools to make voting easier or safer.

WILL also attacks grants from the Center for Tech and Civic Life (CTCL) to improve the voting process, particularly the grant to Wisconsin’s five largest cities (the “Big 5”). WILL claims that “we also found that private funding of election operations had a partisan bias and impact.”

This claim is not supported by evidence. The graph below shows the 2016 and 2020 vote in three groups of municipalities: the Big 5 cities, the next 15 largest Wisconsin cities, and the rest of Wisconsin. As you can see, across the state substantially more people voted in 2020 than 2016. 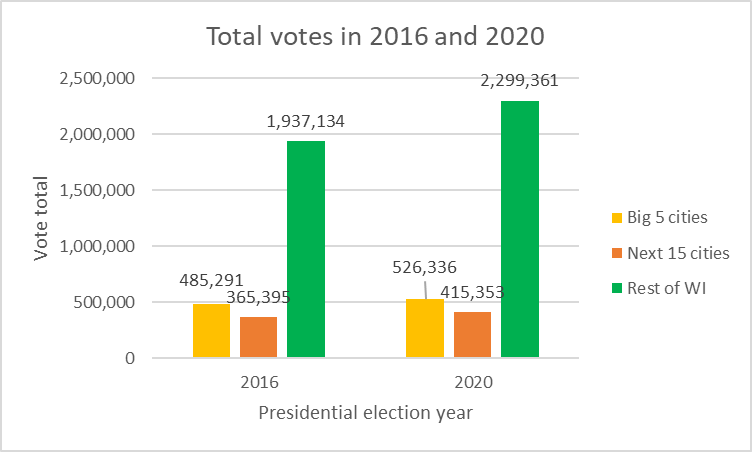 The next graph shows the share of the total state vote that went to each of the three groups of municipalities. It is noteworthy that the Big 5’s share went down, from 17.4% to 16.2%. Does that mean that the CTCL grant failed? Only on the assumption that its purpose was partisan, rather than offering its citizens a better voting experience than the incredibly long lines of the spring election. Either way, the data shows no evidence for WILL’s contention. 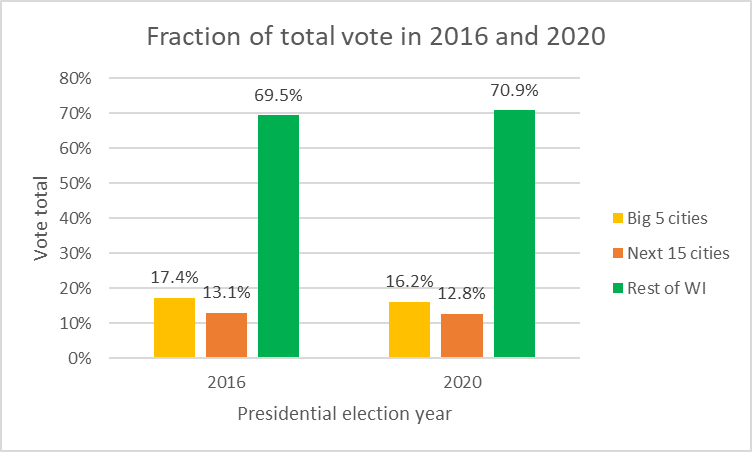 Perhaps the worst of WILL’s recommendations is that “legislative efforts should be made to ensure these practices are the same in every corner of the state.” Wisconsin is known as one of the few states that manages elections at the municipal level—its cities, villages, and towns. Presumably this reflects a decision that elections are best managed by people at the local level who know the needs of their neighbors. Adopting WILL’s proposal would seem to end any advantage of local control.

The result of the decision to manage elections at the municipal level is that Wisconsin has 1,848 local governments running elections. Most of these are very small. The median district (meaning that half are smaller) has 744 voting age residents. The needs of Milwaukee, with 434,698 potential voters, are likely to be quite different from those of Popple River in Forest County, with 40 eligible voters.

This variation in needs is reflected in decisions about voting machines. The graph below summarizes a survey of the voting machines used in Wisconsin municipalities. 672 of them, slightly more than one-third, report that they don’t use a voting machine, meaning that they tabulate the votes by hand or by using a spreadsheet. WILL’s proposal would seem to require that Popple River use a voting machine or prohibit their use in Milwaukee. 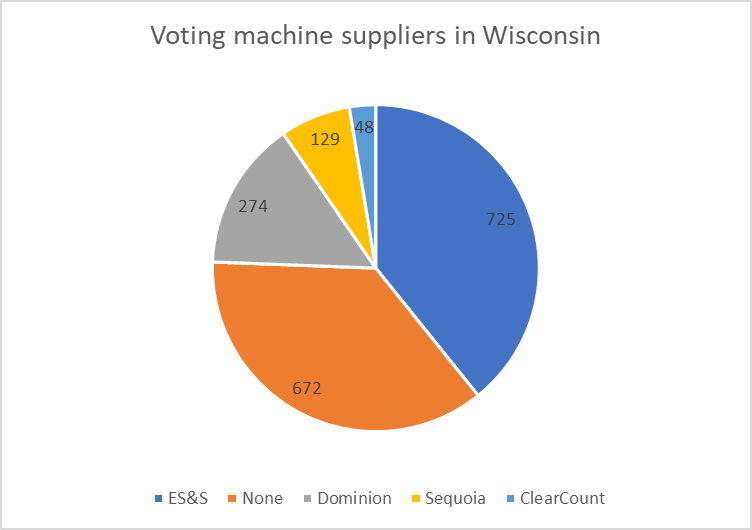 It is likely that drop boxes would get a similar reaction. In smaller districts drop boxes would be considered more trouble than they are worth. But under WILL’s proposal, Milwaukee could not have drop boxes unless Popple River thought they were useful. That seems to be the aim of this proposal.

Finally, WILL would require Guidance and Communications to Clerks to be sent to the Joint Committee for Review of Administrative Rules (JCRAR) for its approval. Putting election policy under the thumb of this legislature, especially given the expressed intent by the Wisconsin Supreme Court to continue the 2010 gerrymander for another 10 years, does not seem the ideal strategy to make Wisconsin the paradigm of law and liberty. Rather, it will move the rule making from the nonpartisan state Elections Commission to a Republican-dominated legislative committee.

Reading WILL’s attacks on the Wisconsin Elections Commission, I had the sense of having seen this movie before. The WEC’s predecessor, the nonpartisan Government Accountability Board, was executed for the crime of investigating coordination between then-governor Scott Walker and various supposedly independent groups. The coup de grace came in a state Supreme Court decision in an opinion written by then-Justice Michael Gableman.