By Melanie Conklin, Wisconsin Examiner - Dec 13th, 2021 07:21 pm
Get a daily rundown of the top stories on Urban Milwaukee 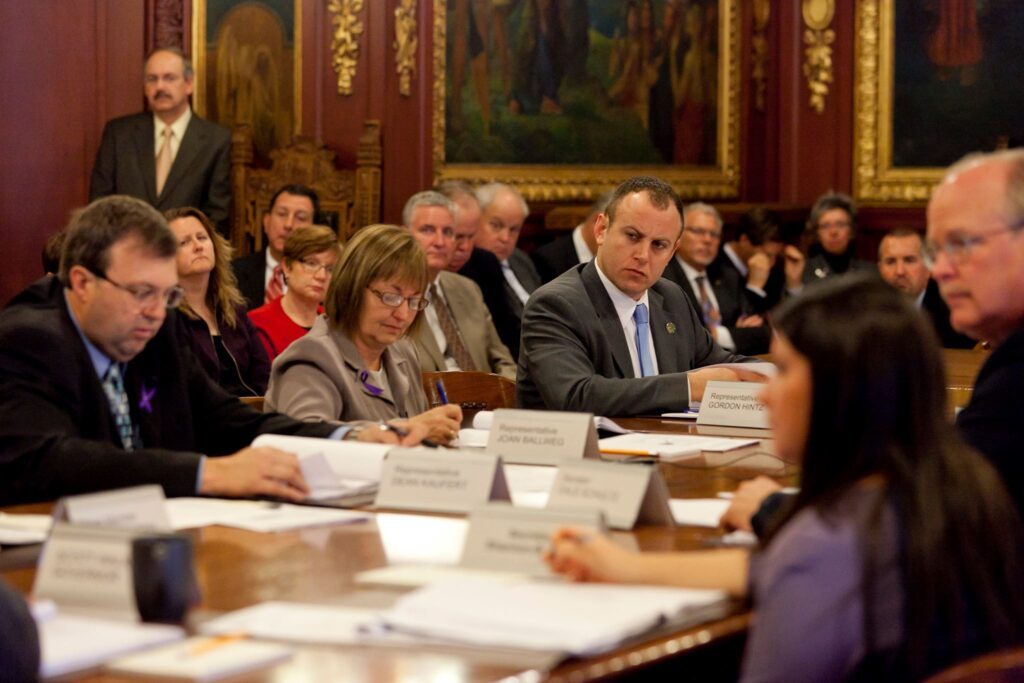 He cited his wife Liz and two children, Beatrix and Gethin, who are both under the age of five, as his reasons for making his decision. He also laid out, in a release, the successes that Democrats have had…something rarely talked about in the Legislature where Speaker Robin Vos has built a Republican political juggernaut, targeting resources to GOP causes and deploying his acumen for political messaging.

Vos had some kind words for Hintz: “I’ve enjoyed working with Gordon over the last four years. While we don’t agree on policy we certainly share a love for the state of Wisconsin and a desire to see growth and prosperity for all the people that make it such a great place.”

“Serving in a leadership position demands a significant amount of time and I respect his decision to focus on his family,” Vos added in a statement. “I wish him the best of luck and look forward to continuing to work with him in the Assembly.”

Hintz is known around the Capitol for being among the strongest and most articulate voices on the Democratic side pushing back against Vos and Republican leadership, often with a dose of humor.

“As his former colleague in the Assembly, I always appreciated his innovation, his ability to message effectively, and helping to bring new voices to the caucus,” said Sen. Melissa Agard, who served in the Assembly before being elected to the Senate two years ago.

“After choosing to seek another term in 2020, I was committed to serving as Assembly Democratic Leader through the 2021 state budget process and redistricting,” said Hintz.

Hintz’s list of Democratic accomplishments includes battling Republicans on a number of issues.

“We have been innovative and effective in articulating our message,” said Hintz. “We led the successful effort to hold Governor [Scott] Walker accountable for the Foxconn debacle, unaccountable tax giveaways, and record debt borrowing to pay for our roads – leading to his defeat in 2018.”

From the Democratic perspective, stopping Republicans from running the table is a success, particularly after eight years during which Walker and Republicans controlled both the legislative and executive branches of government.

“We have upheld Governor [Tony] Evers’ vetoes on every single attempt. We have continuously fought back against extreme efforts by Republicans to divide our state and to undermine our democracy. And in the last two election cycles, Assembly Democrats have picked up seats and returned every single incumbent, despite the most gerrymandered maps in American history.”

Hintz ended his announcement by saying he felt confident and optimistic about the future of Assembly Democrats, adding, “I’m grateful to the leadership team that I served with, and look forward to the many talented newer members ready to step up. …. I look forward to continuing to serve alongside my Democratic colleagues in the Assembly as we work to charter a brighter course for the people of Wisconsin.” Hintz will continue to serve in the Assembly as representative and has not decided whether to run for reelection in 2022.

Indeed, Neubauer indicated to her local paper that she is considering a run for the minority leader position, which is elected in a vote by members within the Assembly Democratic caucus. Hesselbein has expressed an interest in running for the state Senate seat that will be open with Sen. Jon Erpenbach’s announced departure, saying she will need to wait until the new redistricting maps are established, but said last week that it is “highly likely I will run.”

Asked about running for minority leader, Subeck says, “I am not planning to at this time,” and Goyke, who had his first child this year during budget season, is even more to the point: “Nope.”

Another potential contender, Spreitzer, responded to Hintz’ news: “From standing up for Wisconsin taxpayers against the Foxconn catastrophe to working to keep people safe through the COVID-19 pandemic, Gordon has led our caucus through tremendously challenging times.”

Currently there are 38 Democrats and 61 Republicans in the Assembly.

Hintz to exit the Assembly Democratic leadership stage was originally published by the Wisconsin Examiner.