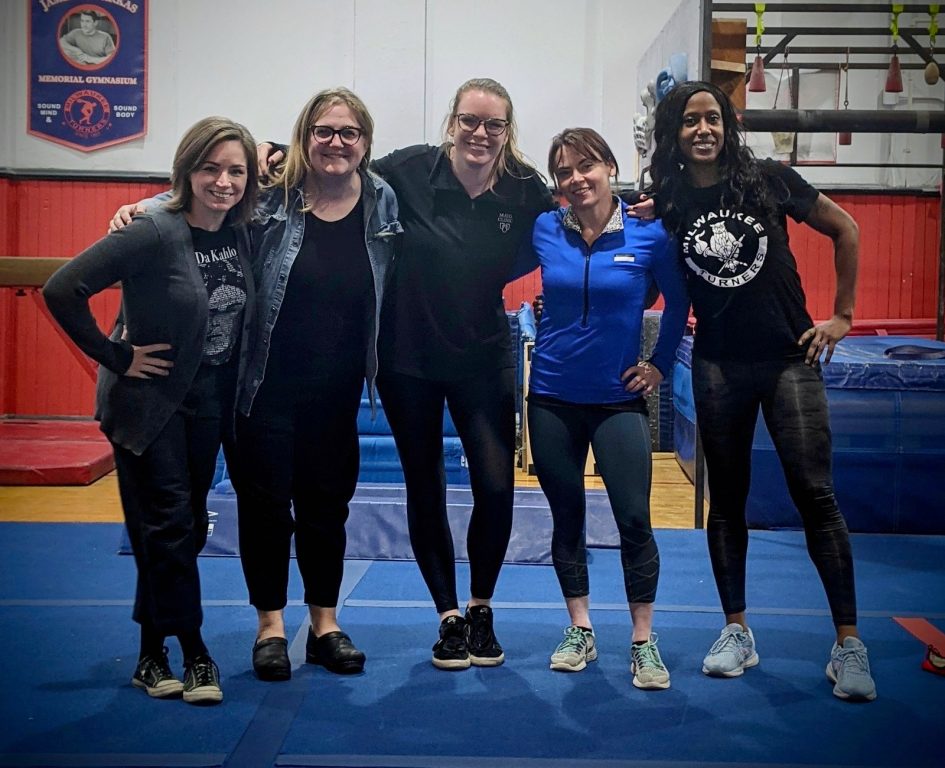 When Amber Tucker was looking for an outlet to deal with her trauma, she found martial arts.

Tucker, an assistant professor of sociology at Cardinal Stritch University, initially signed up for an exercise class, hoping to find a stress release. She was a single mother and had dealt with the impacts of the criminal justice system on her loved ones.

In learning martial arts, jujitsu specifically, Tucker found a psychological outlet for stress and a community of others who helped her learn more about herself. She adopted a new lifestyle, including such practices as meditation and yoga.

“There’s this hashtag that martial artists use, #MartialArtsSavedMyLife, to talk about how it changed their life,” Tucker said. “How it helped them in dealing with and coping with trauma, redirected their life and focus. That really resonated with me.”

Now, she hopes to do the same for other women.

Restorative Justice In Movement, a pilot program being held in the athletic spaces at Turner Hall, 1034 Vel R. Philips Ave., aims to help women find a way to reconnect with their bodies through exercise. It’s not just a way to get healthier physically: it’s a way to help them recover from trauma.

The program, which has been funded by the Marquette University Institute for Women’s Leadership and President’s Challenge for Racial Justice and Equity Response, specifically recruits women of color who have been affected by mass incarceration. This can mean that they were incarcerated themselves or that they were affected by someone else’s time in the system.

Noelle Brigden, associate professor of political science at Marquette University and one of the program’s lead researchers, said the program also is open to those who have been affected by deportation and immigrant detention.

Over the course of a few weeks, women get to experiment with rock climbing, martial arts and power lifting in order to find different ways to express themselves with their bodies.

Emilio De Torre, executive director of Milwaukee Turners, said women in the program also are given free memberships to use the facilities. Milwaukee Turners operates the gym spaces at Turner Hall, including a rock-climbing gym.

“We almost lack a language for describing what we want to do, because it’s an embodied empowerment program,” Brigden said. “People will say fitness, or they’ll say mental health, but we have a much more ambitious goal of empowerment.”

Brigden said that one of the most impactful parts of the program has been seeing women discover the connection between strength and the mind. For activities like rock climbing, jujitsu and power lifting, technique is a large part of one’s ability to do it.

“To discover that, in fact, your mind is part of your strength and connected to your body in that way is a powerful moment for me to watch and listen to,” Brigden said. “It’s exciting because it’s leading us to redefine strength and see it in ourselves.”

Tucker said that women are socially conditioned to think their bodies are naturally weaker, and therefore less capable of doing certain tasks. The program hopes to help them understand their bodies and their abilities more fully, especially in sports that might not be traditionally considered feminine.

“One of the biggest things I impressed upon the women is the idea that ‘your body is enough,’” Tucker said.

On top of providing exposure to the new forms of exercise, the group also hopes to foster an environment where women of all body shapes and types will feel comfortable. Jennifer Ohlendorf, assistant professor of nursing at Marquette, said that it can be an obstacle for women if they don’t feel accepted in these spaces.

Having a space where other people understand the effects of trauma is key. Heather Hlavka, assistant professor of social and cultural sciences at Marquette, said that women can lose connection with their bodies because of being told “how to think, how to feel and how to heal.”

“Something that trauma and violence really severs is the connection between self and your body,” Hlavka said.

The material effects of incarceration present difficulties as well. Trying to balance financial burdens, parole hearings, paperwork and supporting a family can be incredibly difficult. Ohlendorf referred to these obstacles as “time stealers” that prevent women from taking time for themselves.

This makes helping women find time to devote to themselves a critical goal, Ohlendorf said.