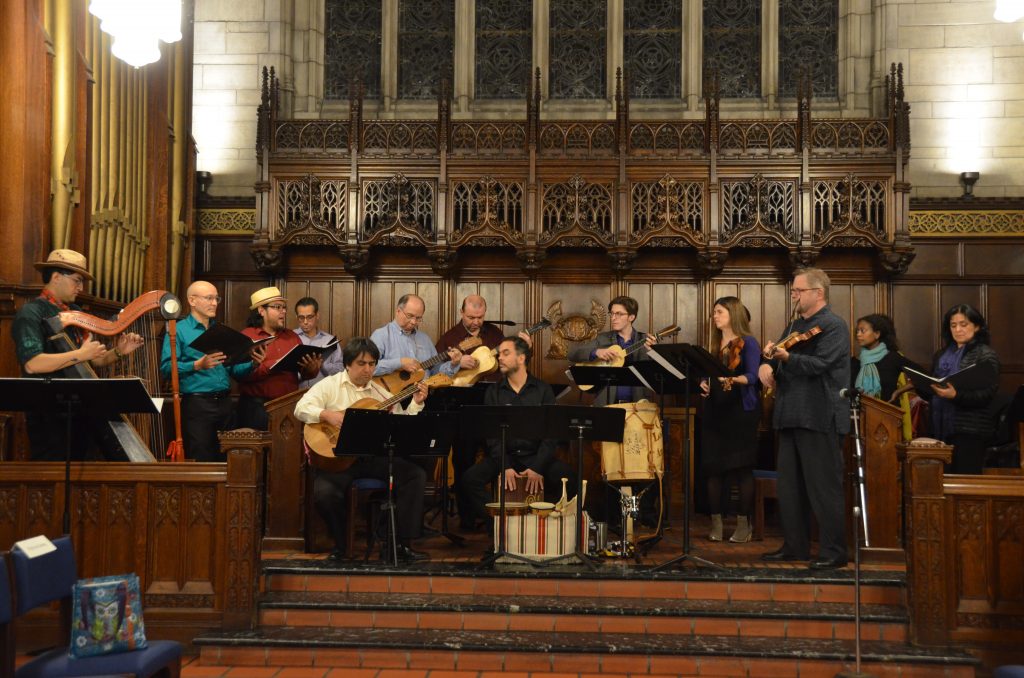 The Newberry Consort takes its audience back to 17th-century Mexico to imagine the nuns of the Convento de Nuestra Señora de la Encarnación in Mexico City singing sacred Christmas music. Selections include Spanish music introduced to Mexico as well as those of Mexican composers who incorporated elements of indigenous music into their work. Ellen Hargis, co-artistic director of the Newberry Consort, recognizes the fusion of cultures in the work of Juan Gutierrez Padilla (1590-1664). “You can hear the jazzy rhythms of the new style mixing with the elegant polyphony of the old style in his writing,” she notes.

Eight women’s voices and five instrumentalists make up the ensemble.

For other visits to Milwaukee, the elegant voices of the Newberry Consort would offer a more traditional early music concert. This event takes a theatrical turn.

The program’s dramatic re-creation is based upon “descriptions of 17th-century Mexican convents, with people gathering outside the cloister walls to hear the nuns so renowned for their musical gifts, and villancico bands, groups of traditional musicians with folk instruments, playing at the gate of the convent to celebrate the entrance of a novitiate about to leave the secular world to take the veil as a nun.”

The concert recreates “the contrasting grand solemnity in the cloister and festive atmosphere we imagine was enjoyed in the plaza outside.”

The Newberry Concert shares the program with EnsAmble Ad-Hoc. The latter performs villancico music blending Spanish and African elements of colonial Mexico. Eight singers are accompanied by a band of eight “with percussion, including a burro’s jawbone, harp, violins, and descendants of the Spanish guitar, including jaranas (jaranas mosquito & tercera), requinto, huapanguera guitar, and leona,” its promotional information notes.

An illustrated video with super-titles will be projected during this multi-media event.

The evening is inspired by the excitement and color of Mexican celebrations of the Christmas season even today. Creating a historically inspired 17th-century version of these celebrations requires imagination and attention to detail by the collaborative leadership of the Newberry Consort and EnsAmble Ad-Hoc.

The Newberry Consort has created a preview video for “A Mexican Christmas.”

Early Music Now requires proof of vaccination against COVID-19, or proof of negative test within 72 hours — with a valid ID. A mask fully covering nose and mouth must be worn at all times.