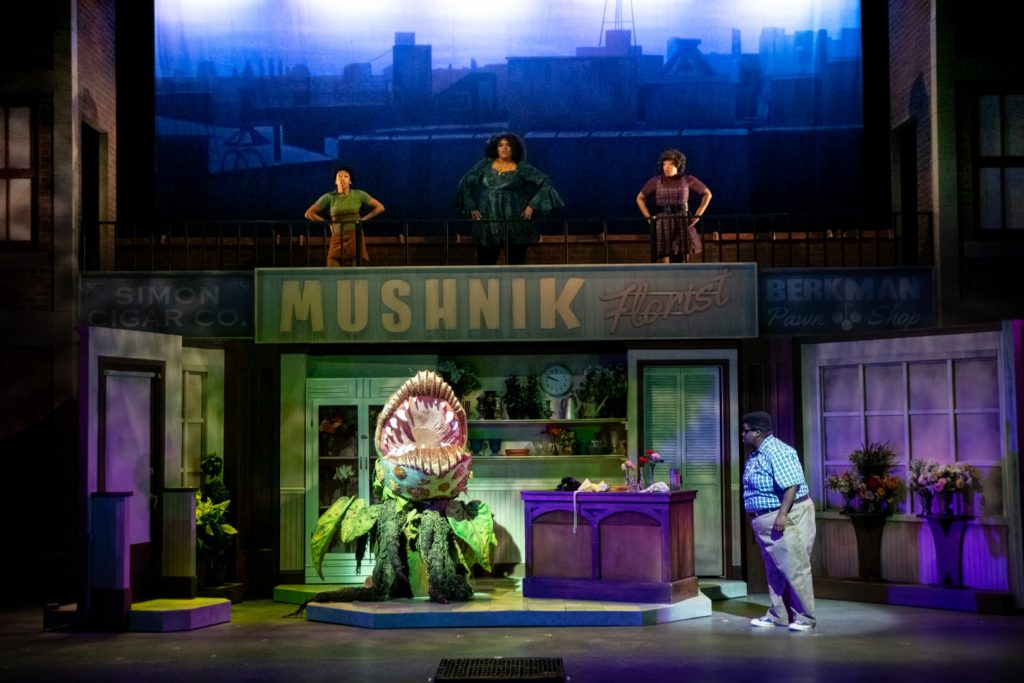 With a major change in plot, a low-grade 1960s horror movie was transformed in the 1980s into an off-Broadway runaway hit and a film that made its blood-sucking, ever-growing plant a major musical comedy star. It also added the phrase “Feed Me!” to the vocabulary of teenagers and theatergoers everywhere.

It’s more than nostalgia for old successes that has led the Skylight Music Theatre to run Little Shop of Horrors through January 2 as its holiday musical, relying on audience enthusiasm to continue past New Year’s. It is in my view a little different than the spurt of familiar settings and titles that have coaxed the audiences back into many Milwaukee theaters.

First, the musical does have eerie echoes of the epidemic we just went through – turns out in the original book some 45 years ago it was an old Chinese magician behind the emergence of Audrey II, the man-eating plant that grows and feeds with the intent of consuming the world. Fed by hapless Seymour, the plant fulfills its dream of fame and feminine companionship (that’s the first Audrey, the abused plaything of a biker dentist). Audrey works with Seymour in a Skid Row flower shop.

The obvious purveyors of greed and evil are slowly fed to Audrey II, which is a series of ever-increasing puppets (first created for the Skylight in a 2003 run by Lisa Schlenker, who is again credited along with new scenic designer Brian Prather and puppet overseer Simone Tegge).

It may seem excessive to honor all the parts of Audrey II, adding a nod to lead puppeteer for all the shows, Gabriella Ashlin, and particularly the howling, singing, wailing “Feed Me” voice of Audrey II, Aaron Reese Boseman (a terrific vocal performance).

All this and the large cast of human actors (some of whom also handle puppet-like moments) are under the control of Skylight artistic director Michael Unger who has waited nearly two years to show his live theater chops with a touch of campiness. (He has worked with eminent designer Prather before).

But there’s a reason for putting Audrey II and all its controlling masters front and center. Unger has built the production to reflect this outrageous tongue-in-cheek style. He has allowed the beautifully miked human actors and the show itself to abound in audacity and increasing size, caution be damned. The show like the plant becomes larger than life and the satirical oomph underneath it all fully excuses the tendency to blow down the walls of the Cabot Theater with volume and energy (not just the singers but the four-piece band led by keyboardist David Bonofiglio).

Before they became known as Disney magicians (for movies like The Little Mermaid and Beauty and the Beast), book-lyricist Howard Ashman and composer Alan Menken weren’t after songs for the audience to sing on the way out. In fact, only the bizarre love song “Suddenly Seymour” became memorable on its own (though some would argue for “Somewhere That’s Green”).

But they packed this musical with catchy variations of Motown, performed here like escapees from the stage maneuvers of the Supremes by big-voiced trio Kristen Jeter, Brandite Reed and Raven Dockery.

There are also vaudevillian turns sung and danced at full volume. David Flores may have only found half of the Yiddish burlesque possibilities of Mushnik but he and Kevin James Sievert as Seymour thoroughly enjoy the rotund heel-and-toe required. The show has several numbers that are more memorable in style of delivery than melody.

The out-sized satire and conundrums created by the ravenous puppet (as it grows from hand manipulation to a giant mouth dominating center stage) allow the company to explode in big voices and broad gestures fitting the circumstances (which are not the same as in other musicals). Thus as the actual love interest Audrey, Ashley Oviedo emphasizes a powerful voice and intense looks over the more comedic riffs in the role. Her outrageously tight garb substitutes for the comic delivery. Sievert as Seymour has the little-boy-lost mannerisms of a nice guy forced into weird circumstances, with a good singing voice along with the earnest approach, though the storyline exhausts his repertoire.

Dan Gold is a manic standout in the show, though he substituted for weekend performances on short notice, playing many smaller roles but mainly the satanic dentist and woman beater who sniffs gas and dies with glee.

His performance is typical of how Unger has approached this production. If the centerpiece is an outsized literal man-eating plant, then the creatures around the plant can take on flamboyant dimensions, morals and gaping grimaces, too. For this musical, at this time, it’s a winning approach. 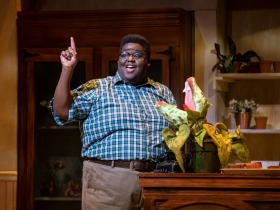 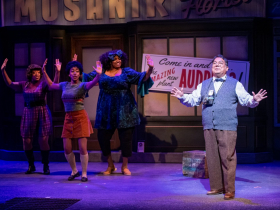 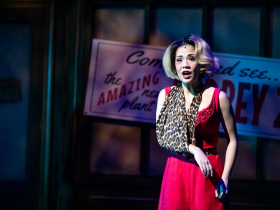 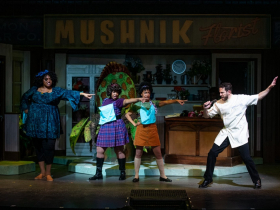 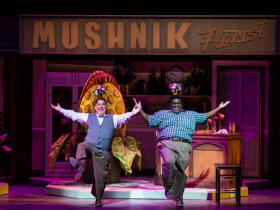