Upgrade of area near 23rd and McKinley part of bigger plan to capture 8.5 million gallons of stormwater. 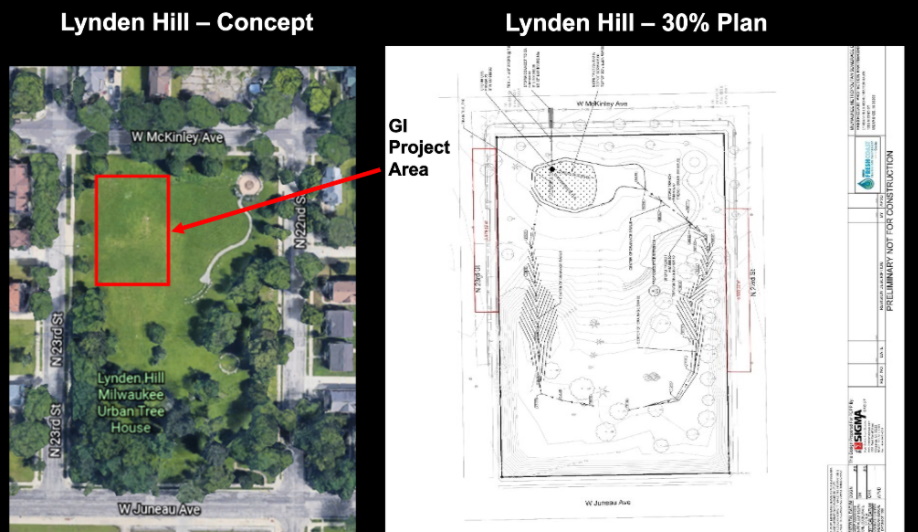 Lynden Hill, a three-acre green space in Milwaukee’s Midtown neighborhood, will soon play a small role in a much larger effort to keep water out of the sewer system and prevent flooding.

A bioswale capable of storing up to 130,000 gallons of stormwater will be constructed at its northwest corner, the low point on the sloped block.

“In addition to the stormwater being captured from the site itself, the bioswale would also capture runoff from portions of N. 22nd St. and W. McKinley Ave.,” said Redevelopment Authority of the City of Milwaukee environmental project manager Tory Kress to members of the authority’s board on Thursday.

The project’s design, construction and first two years of maintenance are being paid for by the Fresh Coast Protection Partnership. FCPP is a partnership between the Milwaukee Metropolitan Sewerage District and infrastructure solutions firm Corvias.

“The Corvias team has been working for a few years now for sites that can help meet this goal,” said Kress.

The Sigma Group, an engineering firm, has now reached a 30% design threshold for the Lynden Hill site, triggering a RACM board review.

Get a daily rundown of the top stories on Urban Milwaukee
“Our goal at this point is keeping the bioswale essentially functional and fairly low maintenance,” said Kress.

The board unanimously approved a license agreement.

RACM has owned the property, 1255 N. 22nd St., since 1987. It was formerly the site of Misericordia Hospital, which relocated to Brookfield in 1969 and later rebranded as Elmbrook Memorial.

Designated an “Urban Tree House” by the U.S. Department of Agriculture’s Forestry Service, it was managed for a time by Keep Greater Milwaukee Beautiful.

“They are no longer receiving that funding so they have let their management lease lapse essentially,” said Kress.

She said MKE Plays, the arm of the city’s Department of Public Works that manages several dozen city parks, could eventually take over the space.

“It’s one of the things we will continue to work with MKE Plays on,” she said.