By Isiah Holmes, Wisconsin Examiner - Nov 9th, 2021 01:48 pm
Get a daily rundown of the top stories on Urban Milwaukee 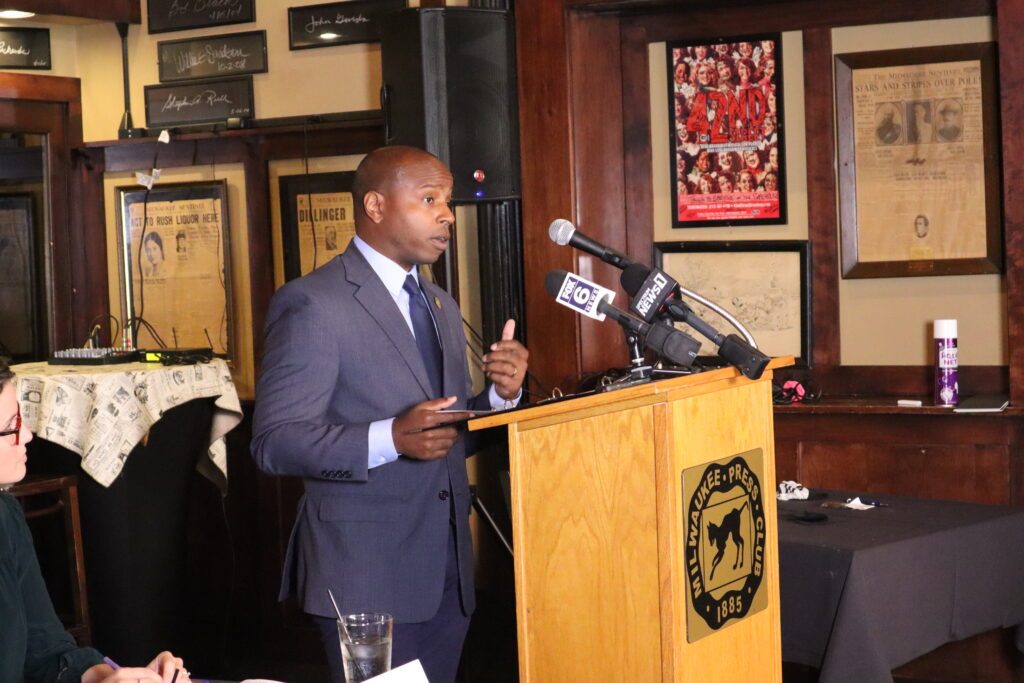 As Milwaukee Common Council President Cavalier Johnson peers into the city’s future, he is sure of one thing: For that future to be a good one, the city is going to need additional revenue. And to get the revenue, Milwaukee will need to find a way to repair its fractured relationship with the state Legislature. “Certainly we have suffered some of the constraints of the state’s relationship with the city in terms of our budgeting,” Johnson told Wisconsin Examiner. “If you look forward to the year 2023 and beyond, the city’s in some very dire financial straits. And the only way for us to be able to overcome those is with true partnerships with Madison and the state government.”

The revenue shortfall  is at the root of many disagreements of how to shape the city budget. And that shortfall stems from state policies that have choked the flow of shared revenue funds to Milwaukee.

The city has been called the economic engine of the state, and Johnson hopes to remind folks in the Legislature of that fact. “In terms of our ability to invest in things like public safety, like violence prevention, and even so far as lowering taxes or not raising the property tax levy year after year, we need additional revenue options and the state is the only one that can do that,” he said.

Johnson sees improving Milwaukee’s image in the eyes of the Republican majority in the state as part of the solution. “I feel like we’ve had some headway,” said Johnson, “but those are relationships that need to be fostered over time.” Shortly after Mayor Tom Barrett’s nomination as ambassador to Luxembourg was announced, Johnson says he was contacted by Republican state representatives who seemed excited to work with a new future mayor. Johnson was selected to succeed Barrett as acting mayor until the next election.

“Those relationships and those conversations have been very good,” said Johnson, speaking of Republican representatives around the Milwaukee area, as well as some from other Wisconsin districts. “I know that there were some Republican members that had reached out to me privately as the news broke about the mayor going on the ambassadorship, and expressed their excitement about being able to work with me. And I think that’s good for the city, because quite frankly, as it stands, the Legislature is in Republican hands. If we really want to get things done for Milwaukee, then we have to be able to move past some of the divisions of the past and get things done in the Capitol so that Milwaukee can be in a better place.”

Still, making those connections is a challenge, to say the least. As recently as June, Republican legislators focused negative attention on Milwaukee and often spoke of the city as a dangerous, frightening place. One bill aimed at Milwaukee decreased a municipality’s shared revenue funds in proportion to any cuts to law enforcement. Throughout hearings on the bill, Republican members condemned protests over police brutality and singled out certain Democrats for supporting the protests. Meanwhile, GOP members focused on crime rates in the city, with Rep. Joe Sanfelippo (R-New Berlin) calling for the National Guard to be deployed to the city to quell violent crime. Wisconsin Examiner contacted Sanfelippo’s office, as well as those of Rep. Julian Bradley (R-Franklin), and Sen. Dale Kooyenga (R-Brookfield) for comment on their conversations with Johnson but did not receive a response.

Describing the dysfunctional relationship between the state and its largest city, Rep. David Bowen (D-Milwaukee) said, “at this point we’re becoming a gold mine. Because you’re extracting the gold. You’re extracting the resources from our local municipality and you’re not pouring back in. We have a chance in this body to set a different trend.” Johnson has noticed a similar pattern, noting that some folks “see Milwaukee as a place where there’s a big dollar sign attached to it.”

“This is the one place where there is a gold mine of tax dollars in terms of sales tax that go to support state functions, not just in the city but elsewhere across the state, too,” Johnson told Wisconsin Examiner. “And if we’re able to make that case, and show Republican members the value that Milwaukee brings to the entire state, I think that we’ll be in a better place to pivot on that relationship. And get, again, the big important things done for the city that we need to do.”

Johnson hopes that by being a tireless advocate for the city, he can create momentum for policy change. “I’m practically going to have a cot in the Capitol in order to build those relationships,” the UW-Madison graduate said. Nevertheless, Johnson knows that some of the responsibility is also on members of the GOP. Particularly those who portray Milwaukee as a dangerous place. “I think it’s important to have legislators to come here, to come on the ground in this city. So I’ll be inviting them here to do that. And I’m not unwilling to go to wherever it is that they are, including in their districts elsewhere in the state, in order to have those conversations, too.”

In June Sen. Van Wanggaard (R-Racine), one of the authors of the shared revenue bill, admitted to having limited experience on the ground in Milwaukee. “I’m not up in Milwaukee knocking on doors, I’m down in my area in southeastern Wisconsin knocking on doors that you’ve got some pretty good neighborhoods with officers working on the street.”

Johnson recalled traveling to Rhinelander earlier this year with Milwaukee County Executive David Crowley. They made the four-hour journey to “have conversations about revenue options for local governments and how the state’s inaction in providing those is causing pain for Milwaukee city and Milwaukee County. And learning at the same time that it’s not just the big city, it’s not just the big county that is under these constraints. A lot of the small towns, a lot of the small cities and counties, were also at that very same meeting—the Joint Finance Committee hearing—saying the exact same things.”

In Milwaukee, many of problems are more acute. Johnson stresses, however, that many communities around the state have the same needs, due to under-performing budgets, and a lack of creative options to increase local revenues. Johnson noted during the April committee hearing that “since 2003 if shared revenue had increased with inflation the city [of Milwaukee] would be receiving $111 million more today than we did back then. But instead what’s happened is we’re receiving $20 million less today than we did back in 2003. Since 2004, Milwaukee’s police budget has increased by $115 million. The parallel between the $111 million we should be receiving and the $115 million in increased police costs is unmistakable.” Diversified revenue options are desperately needed Johnson stated. “The problem we need to solve is really quite simple. Our costs, especially related to pensions and wage benefits for public safety continue to rise and our revenues have remained flat.”

Budget battles and stagnant revenues plague other Wisconsin communities as well. “When these policies don’t work for a place like Madison that’s rife with good-paying jobs and state government and the flagship university, and they’re not working for a place like Brookfield … they obviously just don’t work, period,” Johnson told Wisconsin Examiner. “So we’ll be taking that message on the road to the Capitol, to the districts of members of the Legislature, and bringing them here to the city of Milwaukee in order to make that case.”

Cavalier Johnson on rehabbing Milwaukee’s relationship with the state was originally published by the Wisconsin Examiner.