By Shawn Johnson, Wisconsin Public Radio - Nov 4th, 2021 05:02 pm
Get a daily rundown of the top stories on Urban Milwaukee 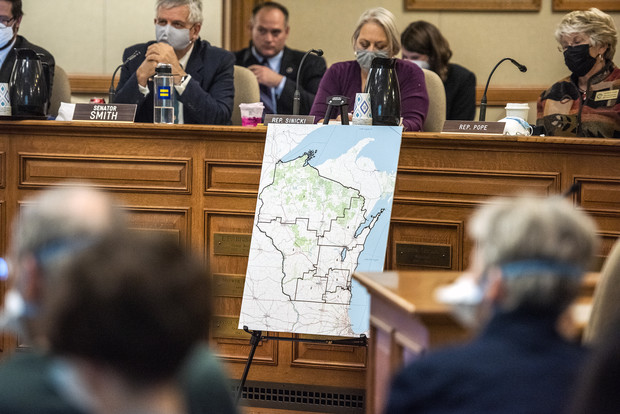 A map created by Republicans in the state legislature is displayed during a hearing Thursday, Oct. 28, 2021, in at the Wisconsin State Capitol in Madison, Wis. Angela Major/WPR

The Wisconsin Senate will vote Monday on the new political maps drawn by GOP lawmakers that could cement Republican’ majorities in the Legislature for the next decade.

The new maps of legislative districts, which passed a state Senate panel on 3-2 party line votes Thursday, would largely lock in a Republican gerrymander that GOP lawmakers drew in 2011, adjusting it as little as possible to reflect the population changes measured by the U.S. Census. They’d also make it easier for Republicans to pick up six out of eight of Wisconsin’s congressional seats, up from the five they hold currently.

During a brief debate on the plans in committee Thursday, Sen. Kelda Roys, D-Madison, chided Republicans for passing maps that “that would guarantee another 10 years of Republican domination in the Legislature” despite Wisconsin’s razor-thin margins in statewide elections.

“I think it’s deeply troubling at a moment when our democracy is in real peril,” Roys said.

Republicans, like Sen. Duey Stroebel, R- Saukville, have argued the plan should pass because it adheres to many of the legal principles weighed by courts when they evaluate maps, such as districts that are compact and contiguous.

“It does a good job of complying with those neutral rules,” Stroebel said.

Thursday’s committee vote came a week after hundreds of people showed up at the Capitol to testify against the maps at a public hearing. The only people to testify in favor of the plans at that hearing were GOP leaders.

A spokesperson for Senate Majority Leader Devin LeMahieu, R-Oostburg, said the full Senate would vote on the redistricting bills Monday. An Assembly committee has also scheduled Monday votes on the maps, and the full Assembly is expected to pass them sometime next week.

Once they pass the full Legislature, Democratic Gov. Tony Evers has already promised to veto the maps. Evers wants Republicans to pass the proposals drawn up by his People’s Maps Commission, which are competitive with a smaller GOP edge. Republicans have said those maps are a non-starter in the Legislature.

Eventually, a court is likely to resolve the dispute. Democrats want the matter handled in federal court, which has a long history of resolving redistricting during times of divided government. Republicans, meanwhile, have asked the state Supreme Court to resolve any redistricting dispute on the grounds that it’s a state dispute at its core. Conservatives hold a 4-3 majority on the Wisconsin Supreme Court.

Once the dust settles, Republicans are hoping for a map that makes the “least changes” to the one they drew in 2011 that redistricting experts say is one of the most gerrymandered in recent U.S. history. Since that map took effect, Democrats have never come close to winning a majority in either the Wisconsin Senate or Assembly, even in years like 2012 when Democratic candidates performed well statewide. A review of the latest proposed maps from Republicans by the Campaign Legal Center found they would make it virtually impossible for Democrats to win majorities in the Legislature.

In September, the Legislature passed a resolution affirming that strategy, stating that new districts should “retain as much as possible the core of existing districts.” The resolution also voiced support for “avoiding incumbent pairing,” which would have the effect of protecting current members of the Legislature, where Republicans hold a 61-38 majority in the Assembly and a 21-12 majority in the Senate.

Roys noted that Republicans ignored those same principles 10 years ago when they drew maps that dramatically reconfigured Wisconsin’s legislative districts.

“This notion that ‘core retention’ or ‘least change’ is somehow a traditional redistricting principle is something that I think has been manufactured almost out of whole cloth,” Roys said. “It is not in the Constitution. It is not in state statute. It has not been used by courts. And it’s not something that has historically been used by mapmakers. It’s something that now suits the purposes of the Republican leadership.”

While next week’s votes are significant, the final resolution to Wisconsin’s redistricting battle could yet take many twists and turns, and take months to resolve.

While a federal court has indicated it will yield to the Legislature, governor and state courts for now, the last time the Wisconsin Supreme Court drew maps was 1964, and there’s no guarantee justices will want to handle redistricting this year.

Federal judges could still step in and take the case if they decide the state process is moving too slowly. Candidates are scheduled to begin circulating nomination papers for next year’s partisan primaries on April 15, 2022, meaning district lines need to be in place by then so that people know where they’re running.

One thought on “State Senate Will Vote on GOP Legislative Maps”