By Isiah Holmes, Wisconsin Examiner - Oct 31st, 2021 01:56 pm
Get a daily rundown of the top stories on Urban Milwaukee 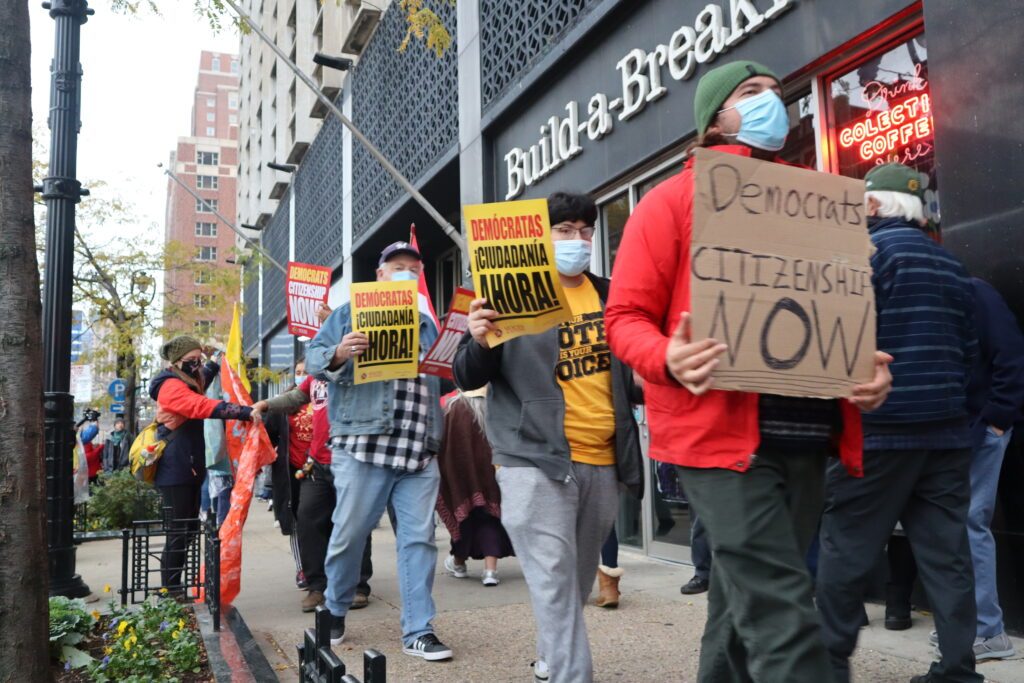 Voces de la Frontera and their allies hold an action outside the Milwaukee office of Sen. Tammy Baldwin. Photo by Isiah Holmes/Wisconsin Examiner.

Organizations allied with Latino and immigrant communities are keeping up the pressure on the Biden administration and Democrats to deliver on immigration reform. On Oct. 28, the immigrant workers’ rights group Voces de la Frontera organized a rally outside the office of Sen. Tammy Baldwin in Milwaukee, shutting down the street. Participants, including Voces de la Frontera Executive Director Christine Neumann-Ortiz, sat in the street after covering the road in large banners.

“Senator Baldwin and Democrats in the House must champion this issue and urge President Biden, Vice President Harris, and their Democratic colleagues in the U.S. Senate to deliver a path to citizenship by the Oct. 31 deadline,” Neumann-Ortiz said in a statement. 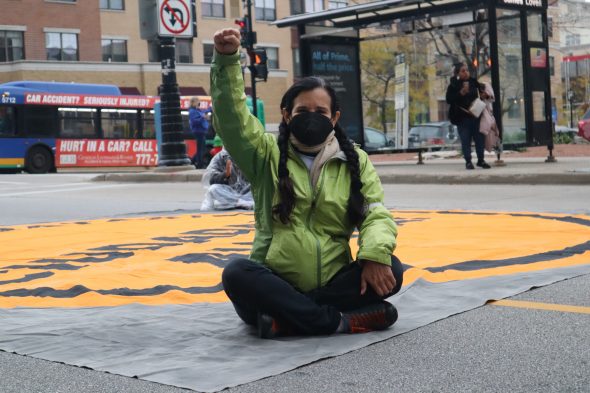 “This means the Vice President disregarding the Senate parlimentarian’s advice and Democrats using their majority power to pass citizenship this year. There can be no economic recovery from the pandemic that excludes immigrant essential workers and their families. Latinx, immigrants, and multiracial youth registered, voted and encouraged others to vote on the promise of citizenship this year. Democrats cannot take these votes from granted in 2022 if their legacy is a legacy of betrayal.”

Former President Donald Trump’s hard-line immigration policies  helped trigger a mobilization at the polls in the communities his policies targeted. But achieving a change in presidents didn’t bring an end to the struggle. While a path to citizenship is part of Biden’s plan, the future of that aspect of his ambitious agenda is uncertain as progressive and moderate Democrats continue to hash out details of legislation they have yet to agree on. Recently, the White House announced that measures to improve the immigration system are still part of Biden’s agenda. Nevertheless, Voces and its allies are not letting up. On Oct. 29, demonstrators planned vigils outside of Baldwin’s Green Bay and Milwaukee offices. The policy changes they are pushing for have a direct impact on many of the protesters.

Leslie Flores, 19, participated in the civil disobedience actions at Baldwin’s Milwaukee office with her 13-year-old brother Luis. Flores and her brother are the children of undocumented immigrant essential workers.

“My brother and I are here with my parents, who’ve called Wisconsin home for more than 20 years,” she said to the crowd. “We’ve fought really hard to get to this point, and we are very close to winning. We need Senator Baldwin and Democrats to fulfill their promises. As children of undocumented immigrants, we have to keep fighting for a better future for our families and stop living in fear.” 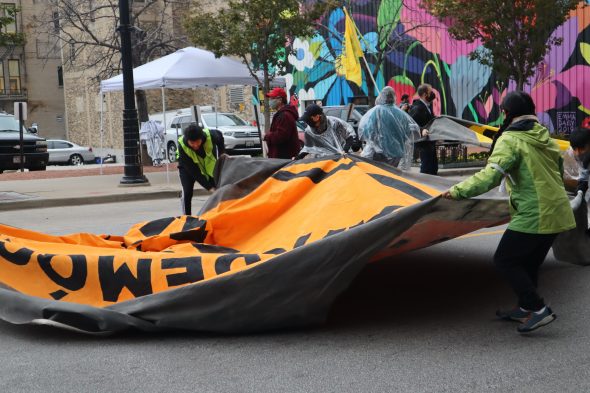 Demonstrators begin to block the street with banners and their own bodies during an immigration reform protest in Milwaukee. Photo by Isiah Holmes/Wisconsin Examiner.

The continued demonstrations have also garnered support from groups representing other minority communities. During the Oct. 28 demonstration Andre Walton, an alderman from Sheboygan, Rep. Francesca Hong (D-Madison) and Pastor Greg Lewis of Souls to the Polls were in the crowd. “You marched with us in the Black Lives Matter marches and now I march with you for citizenship,” Walton told the protesters from Voces. “The only way we’re going to win any change in this country is if we stand together, that’s why I’m here. We need a path to citizenship. We cannot let politicians say one thing on the campaign trail and do another thing when they get into office. If they want our vote they have to earn it.”

“We are at a critical moment in the struggle,” said Neumann-Ortiz. “We celebrate that President Biden announced that there is $100 billion [for immigration reform] in the Build Back Better budget that the House will be voting on soon. It’s there because of us—the immigrant rights movement. But now it is critical that Sen. Baldwin and our Wisconsin Democratic members of Congress stand with us and say that the Senate must pass citizenship with a Democratic majority and disregard the Senate parliamentarian’s biased advice. You cannot have a pandemic relief bill that does not include immigrant workers and the Latinos that helped elect them. We’re going to keep the pressure until they get this done.”

Democrats pressured to keep their promises to immigrant voters was originally published by the Wisconsin Examiner.