By Isiah Holmes, Wisconsin Examiner - Oct 27th, 2021 12:27 pm
Get a daily rundown of the top stories on Urban Milwaukee

Recent comments made by Milwaukee Common Council President Cavalier Johnson sent a wave of concern through parts of the city’s activist community. Johnson proposed increasing the police presence around schools in the hope of curbing reckless driving incidents. As the city hashes out its proposed budget, Johnson is poised to succeed Mayor Tom Barrett. Some community organizers fear the city’s dependence on police-based strategies to deal with social problems will continue.

Johnson’s comments came in early October, after a reckless driving incident at James Madison High School. Video captured of the incident shows a car driving onto a sidewalk toward a group of  students. “It’s only a matter of time before those sorts of actions result in somebody’s unnecessary death,” Johnson said. No one was injured as a result of the incident at James Madison High but elected and law enforcement officials have increasingly focused on reckless driving in Milwaukee. Last year, traffic-related deaths reached a record high across Milwaukee County.

Much of the conversation has been focused on reckless driving and traffic deaths on Milwaukee’s predominately African American North Side. To address the issue, both Barrett and Johnson have suggested that increasing in law enforcement is a key solution. Over the last year the Milwaukee Police Department (MPD) has continued developing its Traffic Safety Unit (TSU). The unit focuses on high-visibility, saturation enforcement strategies. One strategy is called the “wave,” where enforcement increases for short periods of time in targeted areas.

Activists working to move away from heavy policing of Milwaukee’s Black communities expressed concern when  calls for more police began to focus around Milwaukee Public Schools. In 2020, the Milwaukee Board of School Directors voted to terminate all contracts between the school district and MPD. That included the district’s reliance on School Resource Officers, and eliminated more than $400,000 in payments from MPS to MPD. It was a hard-fought victory for organizations like Leaders Igniting Transformation (LIT), one of the groups that pushed for an end to the MPD contract.

“The comments made by Johnson about the incident at James Madison High School on Oct. 5 were unfounded and hurtful,” said LIT’s deputy executive director, Cindi Tena. “There is no evidence to support the claim that police presence in schools creates safer campuses. In fact, the evidence suggests the opposite. Studies have shown that schools are no safer, even after years of punitive policing and disciplinary measures, than before such policies were implemented.”

In September, a report by the Center for Public Integrity found that Wisconsin leads the nation in referring students to law enforcement. Between  2017 and 2018, the Badger State referred students to law enforcement at twice the national rate. Black, brown and indigenous students in Wisconsin bore the brunt of these referrals. A separate report by the Sentencing Project this month found that Wisconsin incarcerates one out of every 36 Black residents—the worst rate in the nation. 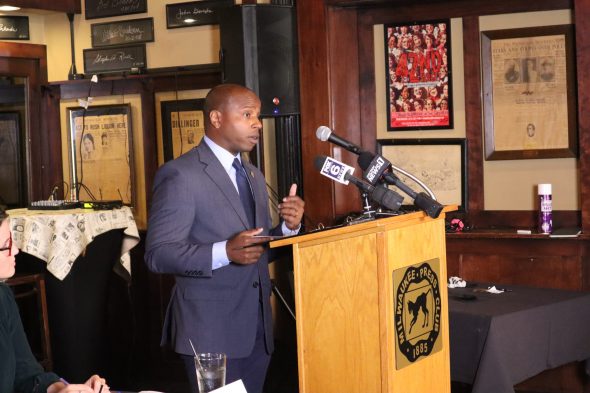 “Before the Milwaukee School Board ended its contracts with MPS,” said Tena, “discriminatory policing on campus resulted in Black students, who make up only 53% of the MPS student body, receiving 80% of suspensions across the school district. Similarly, students with disabilities, who accounted for only 20% of total enrollment, were involved in 91% of in-school restraints and seclusion.”

Tena stresses that as a candidate for mayor, Johnson’s words carry more weight. From LIT’s inception, the group’s driving focus has been the criminalization of Milwaukee’s youth. “It took our members a very long time to even start changing the mentality of people who were in the board back in 2018, and even now,” Tena told Wisconsin Examiner. “They [LIT members] attended several school board meetings, were there for multiple hours, met with board members individually, shared very intimate stories and experiences about being policed not just by police officers, but also by some staff in their schools. And our huge victory in 2020 was due to their hard work. So of course, learning that there’s a leader in the community who wants the district to start a new contract with police officers in our schools is kind of a slap in the face, to be honest.”

She wonders how long Milwaukee’s policy-makers will continue relying on law enforcement strategies to engage with Black residents. “How long have we put most of the city’s funds into MPD and what has that done?” Asks Tena, “that hasn’t done anything.” Although Tena says Johnson’s office hasn’t reached out to LIT, she says the organization is open to a dialogue. However, LIT staunchly opposes allowing the  policies it fought for to be reversed, or backdoored.

“Black and brown students and students with disabilities deserve to feel safe not only on campus but also in their communities,” says Tena. “As in schools, research shows that more police funding, presence and interaction rarely reduces violence and crimes in communities.”

“This is why we strongly oppose Johnson’s call for American Rescue Plan dollars to be used to hire more police officers and vehemently reject the notion that adding police officers in our community will increase public safety,” she adds.

“More cops tip the scales in favor of mass incarceration and away from justice,” she says. “Instead of funding more police, American Rescue Plan dollars should fund education and community-based violence prevention efforts that are proven to work.”

Activists concerned about Cavalier Johnson’s calls for more police near schools was originally published by the Wisconsin Examiner.