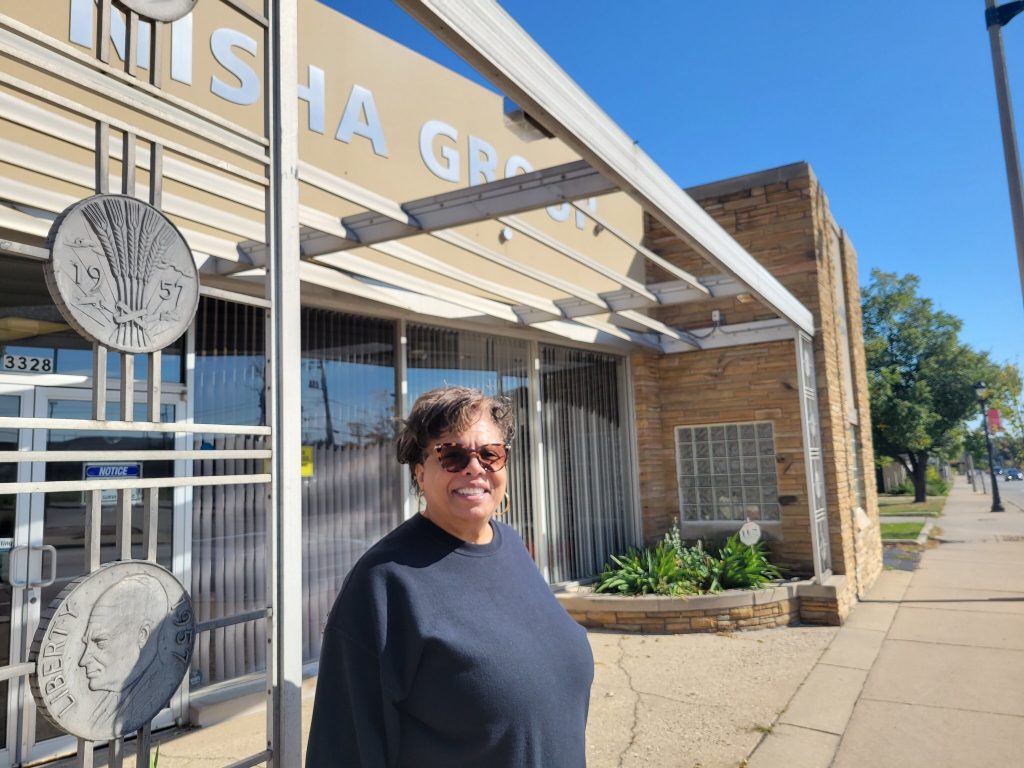 Manisha Dotson, owner and founder of The Nisha Group, said she believes safety initiatives will help drive crime away from Villard Avenue. Photo by Edgar Mendez/NNS.

Obiora Obi, owner of Oasis Lounge on West Villard Avenue, said he didn’t always get the response he wanted when he posted about events he was hosting on social media.

“People would say things like: ‘No way. I won’t come to that area,’ ” said Obi, whose lounge is located at 3120 W. Villard Ave. “It hurts to hear that about your neighborhood.”

“Crime has been coming down now, too, because people are doing their part,” said Obi, who is one of 230 owners who are members of the Villard Avenue Business Improvement District, or Villard Avenue BID.

The BID’s latest effort, a partnership with the City of Milwaukee and Milwaukee Police Department, is called Operation Green Light. The project has brought four high-tech cameras to different intersections in the neighborhood. The cameras provide real-time intelligence for investigations to help curb reckless driving and other crimes, according to Angelique Sharpe, director of the Villard Avenue BID.

“People are going to know that they can’t just come here and do what they want,” she said. “It’s not just about traffic, either. It will help deter things like dumping, loitering and improve safety in general.”

Ald. Ashanti Hamilton, who worked for years to help bring Operation Green Light to Milwaukee after learning about a similar program in Detroit, said the technology and partnership between residents and police will pay dividends.

“We’re letting people know that there are eyes and ears that law enforcement has access to that can help us prevent crime,” he said. “Along with cooperation from residents and business engagement, we’re talking about a holistic view of public safety.”

He said some people may be wary of cameras and their impact on privacy, but that special attention will be paid to ensure that surveillance is used properly.

The cameras can rotate 360 degrees, zoom in and cover the entire business district, Sharpe said. Another important aspect of the project is that business owners who sign on to participate are expected to do much more than call 9-1-1 to report crime. They also commit to comply with city ordinances for their building, provide adequate lighting, clean up garbage and snow in the winter, and they must help deter loitering, among other obligations. The BID helps business owners connect with local programs to cover some of the costs of improvements.

“If you mean well and care about this neighborhood, then these are things you should want to do anyways,” said Manisha Dotson, owner of The Nisha Group, 3328 W. Villard Ave. Dotson, who has made several improvements to her storefront and renovated the inside of her building, was one of the first business owners on Villard to sign up for Operation Green Light.

She moved her business, which provides security guards and training, landscaping and other services, to the neighborhood five years ago. She said she believes that Villard will return to its once glorious past.

“This used to be like a downtown, and it can be excellent again,” Dotson said. “These cameras are going to force criminals to go somewhere else because they know people are watching here.”

Cameras are just one part of a larger public safety initiative on Villard called “Vision Zero,” a public safety approach that has been adopted across the country, including in Madison, to address reckless driving.

The four-pronged plan focuses on equity; education and outreach; engineering; and enforcement. It’s also heavily reliant on collaboration between residents, business owners and other stakeholders, including the city and law enforcement. Phase One of the plan was put into motion during the summer and included several initiatives to address reckless driving, Sharpe said.

“There are changes in the roads now, curb extensions and bike lanes and high visibility crosswalks that people need to get used to,” she said. “We’re working to change behaviors and have to build that infrastructure for people to feel safe riding their bikes on Villard.”

The BID and other partners used a concert series, Summer Vibes on Villard, and other public events to raise more awareness about reckless driving, including hosting art contests for youth and sharing information on vehicle insurance and license recovery.

Phase Two is Operation Green Light, she said. Those plans coincide with ongoing efforts to activate public spaces using art and draw development and businesses to the area, including to the sites of old Villard Library and Villa Theater, both of which are city-owned properties. The long shuttered library, at 3310 W. Villard Ave., replaced by the new Villard Square Library in 2011, represents a major opportunity for a catalytic development, Sharpe said.

“My hope and what residents have shared is that they would like the space to be utilized as an incubator space to host multiple small businesses,” she said.

Obi hopes that more people will continue to give Villard a chance.

“When people find out that the neighborhood is getting better, that the police department is watching and that members of the BID are engaged, this area will draw investors and different clientele to come check it out,” he said.