By Isiah Holmes, Wisconsin Examiner - Oct 11th, 2021 03:30 pm
Get a daily rundown of the top stories on Urban Milwaukee 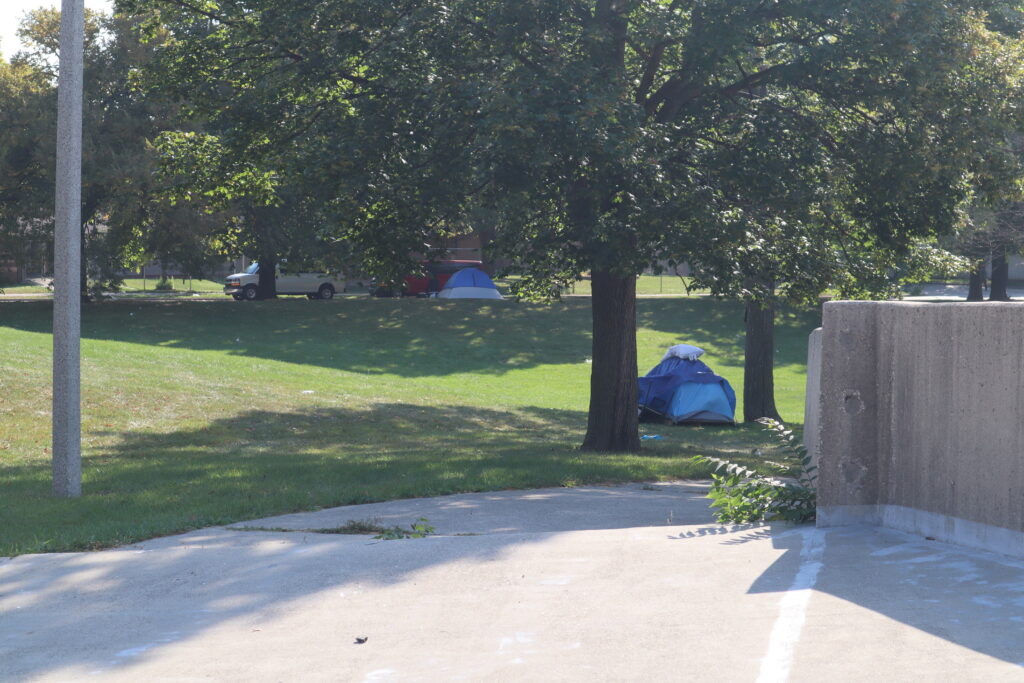 Clusters of tents can be found in King Park, though the number varies depending on the day. Photo by Isiah Holmes/Wisconsin Examiner.

For outreach volunteers and housing advocates at the organization Street Angels, the numbers of unhoused people in Milwaukee is creating anxiety about the coming winter. As the group conducts its nightly outreach missions, handing out supplies and gathering raw data on encounters, volunteers have reached a troubling conclusion. The group is encountering larger numbers of unhoused people than ever before, often in barely visible places. 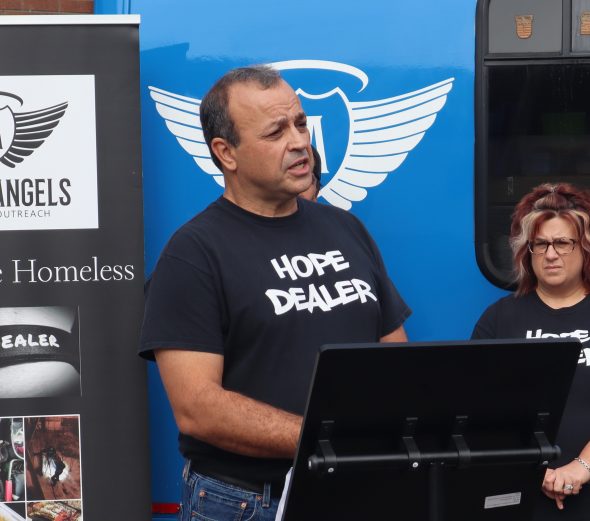 Dan Grellinger, the Angels’ data administrator and a board member. Photo by Isiah Holmes/Wisconsin Examiner.

Street Angels first began gathering data on the group’s nightly outreach missions in July 2018. “It isn’t an easy task,” Dan Grellinger, the Angels’ data administrator and a board member, said during an Oct. 8 press conference. The press conference was organized in observance of World Homeless Day on Oct. 10.

“We run multiple different routes, on multiple different nights, with multiple different drivers,” he explained. “It isn’t an easy task also because as the numbers increase to 160 people, 170 people, 180 people per night, we get into a range of almost 500 interactions, or touches, a week.” Grellinger emphasized that over the Street Angels’ three years of data collection, “we’ve met over 1,200 unique people that have experienced unsheltered homelessness in Milwaukee at some point.”

Each year, volunteers and staff at Street Angels have encountered more and more people. Grellinger attributes this gradual rise to the group increasing its own outreach range, which now includes a route through Milwaukee’s largely African American North Side. Street Angels itself is based on the South Side of Milwaukee, where a large portion of the city’s Latin American population lives. To perform outreach, Street Angels’ buses run north, south, east, and west in the city. Current  data collected by Street Angels shows at least 180 people who are currently unsheltered in the city.

Whether they’re living in their cars, in a tent, or with no cover at all, the stresses on people and effects of living outside are the same. Those 180 people were encountered by Street Angels during the last 30 days. Many of them don’t live in obvious tent communities. Grellinger highlighted that many people are camped “in hidden areas and are not readily seen by the public and traditional service agencies. For that reason, we believe that Milwaukee’s homeless population is often undercounted.”

Grellinger noted that some 20-30% of the people encountered during outreach nights are women. The recent reduction emergency hotel room space compounds the issue. “As a matter of fact we see a fair number of people who had an emergency hotel room last year for COVID who are back out on the street,” he said. The stark realities encountered during their outreach missions makes those at Street Angels hyper aware of the need for services through the winter. Starting on Nov. 1, the organization will be opening an indoor warming shelter. 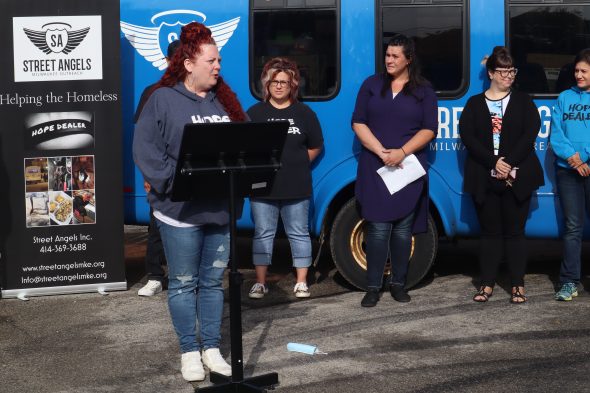 “There will not be a temperature threshold,” said Eva Welch, co-executive director of Street Angels. “We will be open every night of the week starting Nov. 1 until March. The winter warming room is important for so many reasons. Number one, first and foremost, it can save lives. Every year in Wisconsin we have cold weather-related deaths. And it is Street Angels’ mission to make sure that does not happen in Milwaukee.”

Located in a room at Ascension Lutheran Church, the warming room will be open 7 p.m. to 7 a.m. Hot food will be provided, as well as COVID testing. There will be an individual tent set up indoors to provide social distancing due to COVID concerns. Street Angels is also working with the Milwaukee Health Department an hopes to provide vaccine access. Welch noted that this year, in addition to the lack of emergency hotel space, there’s no large congregate warming room. “This year, there’s only a few small warming rooms with few spaces,” said Welch. “So we’re really concerned about what’s going to happen this winter.”

The Street Angels warming room only has space for 25 individuals. Co-executive Director Shelly Sarasin is deeply concerned by that fact, since the group is regularly encountering so many unhoused people. “In 2019, where there was a tent encampment under the bridge downtown,” Sarasin told Wisconsin Examiner, “we were making a total of 26 stops throughout the city. This year, between our two buses, we’re making between 55-60 different stops. Because people are more scattered, and it is more invisible.” The community under the bridge, which became known as “Tent City,” became a symbol of housing and employment inequities  in Milwaukee. Eventually, all the people who lived there were housed or relocated.

Although the unhoused population is more scattered, larger encampments aren’t unheard of. “There were some growing encampments this summer, especially in King Park,” said Sarasin. “Which is down by Repairers of the Breach. At the peak, I think we had about 35-40 tents pop up there this summer. A majority of them have gotten into some sort of temporary housing at this point.” She added that, “the more visible the issue, the more resources pop up.” Unhoused people living in or around the King Park tent community interviewed by Wisconsin Examiner also said they felt the unhoused population had jumped. 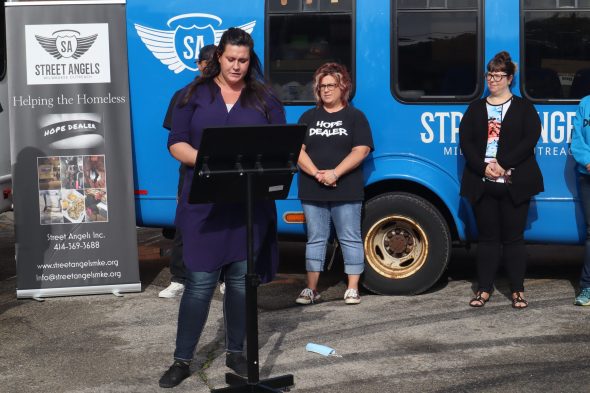 Shauna Kunesh, a speaker at the press conference, once was unhoused herself. In that period of her life, she utilized the Street Angels warming shelter. “Being homeless in Wisconsin is one of the biggest threats I’ve experienced,” said Kunesh. “I had to practically fight for my life when it came down to the basics of food, water, and warmth. When you’re homeless, coming by your basic needs can feel like a fight for your life.” She stressed that the warming center, “feels almost like the gift of life itself.” Kunesh added that having access to a safe place, hot food, “and water that’s not frozen is a blessing.”

At the end of the month, Street Angels will be holding its annual 48 Hours of Homelessness fundraiser. Sarasin explained that during the fundraiser, “our outreach team actually goes out for 48 hours to experience what it’s like, with the resources that are out there, to better understand what our friends are going through on the streets.”

The 48 Hours of Homelessness fundraiser will take place Oct. 22-24, aiming for an ambitious fundraising goal of $150,000 to support both the warming room and further outreach missions. Street Angels is also in need of volunteers to help with winter operations. Unhoused residents can also find resources at Repairers of the Breach, through the Guest House of Milwaukee , and St. Ben’s Community Meal Site at 930 W. State St.

At the end of the day, anyone could be in need of these resources at any point in their lives. “Please believe me when I say that being homeless is not always a choice, it wasn’t a choice for me, ” said Kunesh. “Being looked down on, or ignored, or judged for being homeless had put a lot of hurt in my heart. I have been one of those numbers. And more easily than you realize, that could be you too. When you see a homeless person this winter, please don’t ignore them. Remember that [they] are no less human than yourself.”