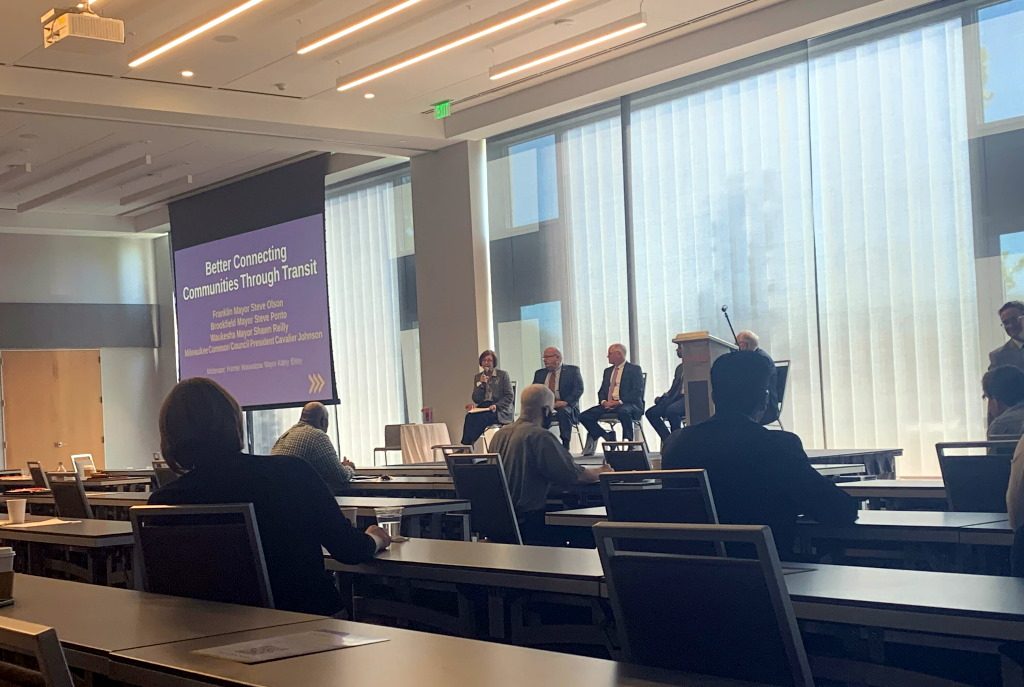 The conference was titled “Moving Forward: Multimodal Transportation for a Strong Region” and was held at the Brookfield Conference Center, some 12 miles from downtown Milwaukee.

Featured speakers included Cavalier Johnson, president of Milwaukee’s Common Council, the mayors of Brookfield, Franklin and Waukesha and Tom Winter of the Milwaukee County Transit System, among several others.

During the conference, Dave Steele, executive director of Regional Transit Leadership Council (RTLC), announced that the group will be rebranding to Mobilise in October. The organization decided its name was clunky, Steele said.

RTLC is an organization that strives to reimagine regional transit to activate the workforce. It is a successor to Transit Now, which was long led by Kerry Thomas. Steele became executive director in 2018.

The conference began with a welcome by Steele and Paul Decker, chairman for the Waukesha County Board of Supervisors.

Steele emphasized the RTLC’s goals, especially the idea of breaking down “silos” — the tendency of municipalities or counties in a region to act separately from one another and often against one another.

Get a daily rundown of the top stories on Urban Milwaukee
“We have to make our region more attractive to new talent,” Steele said. He said that bringing leaders together from different areas helps address these issues.

Steele then addressed some major successes the region has seen, particularly with the Bus Rapid Transit project. Service is expected to begin in Fall 2022 and will run nine miles from downtown Milwaukee and on to Marquette University, Milwaukee’s West Side, Wauwatosa and the Milwaukee Regional Medical Center.

Decker discussed the challenges in solving transportation problem in the region. He said many people are very hesitant to change and do not want to break down silos.

He said the current bus system is not efficient. Many of the structures in place, he said, are not suitable for the reality of Wisconsin’s climate. “We design things in this state as if every day is a beautiful September day, like January never happens,” Decker said. He said forcing riders to sit in the cold is inconvenient and unfair.

Decker noted that the average commute from Milwaukee to Waukesha is more than an hour, which he said is not productive time.

Following the welcome, the program featured Missy Hughes, secretary and CEO for Wisconsin Economic Development Corporation, as a keynote speaker.

Hughes said the limited workforce means that it is important to invest in public transportation and multimodal options to improve quality of life. She noted that when companies are trying to figure out a location, they are looking at several quality-of-life issues, including access to transportation.

Hughes said in order to attract people from Minnesota and Chicago, not just Wisconsin, it is important to improve not just transportation, but to consider other quality-of-life issues, such as childcare and education options.

“As we move toward recovery and think about what we need to invest in … we need to continue to invest in broadband, education and in healthcare. These are the things that will get people back to work,” Hughes said.

Following Hughes’ speech, a panel was held with the mayors of Brookfield, Franklin and Waukesha and Cavalier Johnson, president of the Milwaukee Common Council. The panel was moderated by former mayor of Wauwatosa Kathy Ehley.

Brookfield Mayor Steve Ponto began the discussion of transportation with the issue of entry-level positions in his area. Many people entering those positions do not own an automobile, yet the current bus system is lacking. He talked about the “last mile” problem, where buses routes end far from a corporation and riders have to then walk the rest of the way.

Franklin Mayor Steve Olson discussed its business park and the issues with getting employees there. Waukesha Mayor Shawn Reilly also mentioned the demographics issue, where many people are aging out of jobs, leading to a need for more workers.

All three mayors also discussed the fact that many residents are resistant to bringing bus systems further into the suburbs. Many think a bus means crime will be brought in, when that is not the case, Olson said. He said many bus stops are in retail areas, where crime could occur. However, he said current plans and hopes are to bring buses to more industrial locations where people are working.

Another panel featured several individuals addressing how to build the workforce. Lafayette Crump, commissioner for the Department of City Development for Milwaukee, Susan Koehn, vice president of talent and industry partnerships at M7 and Samantha Maldonado, senior leader of diversity & inclusion for Kohl’s Corporation, were all featured. The panel was moderated by Carolyn Seboe, group director for HNTB. The panel discussed working with companies to figure out what they are looking for and how to find more diverse groups from which to recruit.

The conference concluded with a discussion of solutions for better transit. Tom Winter of MCTS discussed the BRT project and the advancements MCTS has made in terms of technology.

Kelzye Redwell of Horizons in Cedar Rapids, IA, discussed the Neighborhood Transportation Service, a curb-to-curb van service that aims to connect residents to jobs in an area that often did not get cab service. Orlando Owens of The Joseph Project discussed how his organization similarly works to connect workers to jobs in Sheboygan.

He and Redwell both emphasized that nonprofits and organizations outside of the government can help with the transportation issue, saying it is not limited to a public problem.

The conference ended with a concluding remarks by Steele, who discussed the future of Regional Transit Leadership Council.