Wisconsin has 86,000 indigenous people, but little data on those who disappeared.

By Diane Bezucha, Wisconsin Public Radio - Sep 26th, 2021 11:06 am
Get a daily rundown of the top stories on Urban Milwaukee 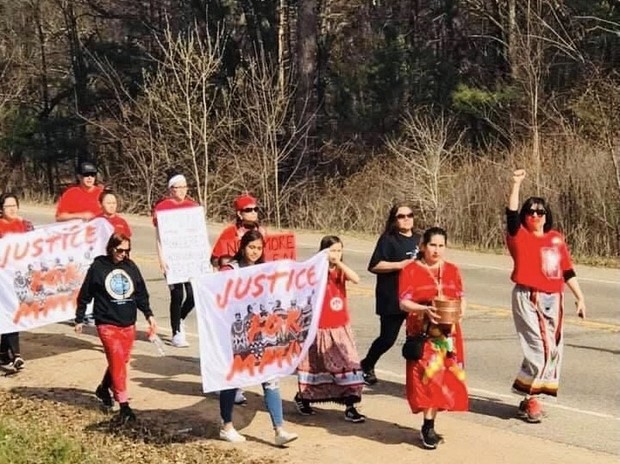 Rachel Fernandez (right), a member of the Menominee Nation and the MMIW Task Force, marches with other advocates on the May 5, 2021, National Day of Awareness for Missing and Murdered Indigenous Women and Girls. Photo courtesy Rachel Fernandez/WPR.

When Rae Elaine Tourtillott, an 18-year-old member of the Menominee tribe, disappeared in 1986, it took authorities six months to locate her. And last year, when 22-year-old Katelyn Kelley went missing from the same Menominee Reservation community, it was nine months before her remains were found.

Countless Native women and girls are still missing. The epidemic of missing and murdered Indigenous women has long been ignored by the state and nation.

“This isn’t new to Indian country,” said Justine Rufus, a member of the Bad River Band of Lake Superior Chippewa. “This type of violence against our women has been happening too long.”

Rufus, 47, said that in her lifetime, there have been four women who went missing from her community, which is a lot for a town of only 500 people, she said.

“This shouldn’t happen at the rate that it’s happening,” said Rufus. “We should be worried and it should be terrifying for the community.”

But Wisconsin, home to at least 86,000 Indigenous people, is starting to pay attention.

Last year, cities across the state designated May 5 a day of awareness for missing and murdered Indigenous women. Attorney General Josh Kaul formed a task force to address the issue.

This week, End Domestic Abuse Wisconsin released their annual homicide report and for the first time ever, it includes an in-depth feature on the crisis of missing and murdered Indigenous women (MMIW) and girls.

“It can’t be only the Indigenous community talking about this situation,” said End Domestic Abuse Wisconsin Executive Director Monique Minkens. “Anyone being harmed by domestic violence is all of our concern because it is a community issue.”

The homicide report documents 60 victims of domestic violence in 2020, ranging in age from 3 to 73. According to the data, not one of them was Native American or Alaska Native. But research suggests this is far from the truth.

‘We Know The Numbers Are High, But We Don’t Know How High’

But Wisconsin currently has no accurate data about the number of missing or murdered Indigenous women and girls in the state.

“We know the numbers are high, but we don’t know how high,” said Rufus, who is co-chair of the state’s Missing and Murdered Indigenous Women Task Force.

The issue is not unique to Wisconsin. Inadequate data is one of the driving factors behind cases of missing and murdered Indigenous women and girls being unsolved.

In 2016 there were 5,712 reports of missing American Indian and Alaska Native women and girls in the United States, but only 116 cases were entered into the federal database of missing persons. 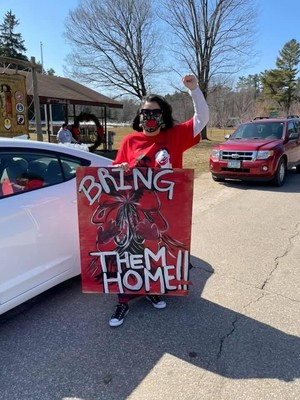 Rachel Fernandez, a member of the Menominee Nation and the MMIW Task Force, at a pop-up protest in downtown Keshena. Photo Courtesy Rachel Fernandez/WPR.

Experts say the breakdown often happens with law enforcement. A case like Tourtillott’s or Kelley’s might have involved tribal police, non-tribal law enforcement, the county sheriff, the state Department of Justice, even the FBI. All of which have varying jurisdiction, protocols and data systems, making it easy for victims to fall through the cracks, especially without mass media attention.

Advocates say another issue is simply misclassification. Because it’s blood-related, tribal membership can be complicated. When Native people are murdered or missing, especially in non-Native communities, advocates say they are frequently misidentified as another race or ethnicity. This is problematic when nearly 80 percent of Native Americans live off of reservations.

“Folks aren’t typically walking around with their tribal identity and so sometimes they’re getting misclassified,” said Rufus. “We’re not finding out that our tribal members are going missing in other areas.”

And the challenges with data go the other way, too.

Some Native communities maintain oral histories which can be hard to document accurately with statistical methods, said Rachel Fernandez, a member of the Menominee Nation Bear Clan and co-chair of the Missing and Murdered Indigenous Women Task Force Data Subcommittee. She added that after generations of abuse, many Native communities are simply distrustful of non-tribal government, making them reluctant to share information.

‘With Our Data, You Could Go Back To Colonization’

This is a loss for advocates like End Domestic Abuse Wisconsin’s Minkens.

“We would definitely want the statistics because that gives fuel to our prevention efforts,” said Minkens.

Still, the data they do have in the report reveals a lot. The 60 victims lost to domestic violence in 2020 is the highest on record since the organization first started publishing the report in 2000, which points to a spike in violence during the pandemic, like the record-setting homicide rate in Milwaukee. The report also revealed that 90 percent of perpetrators are men; that Black women are disproportionately impacted; and that guns are the most common weapon used in domestic violence homicide.

These are all data points that help organizations like Minkens’ direct resources effectively, and why reliable data about Native women and girls is so essential.

“When we’re not represented in the data — in what’s happening to us and why it’s happening to us — it’s hard to evaluate,” said Kristin Welch, a member of the Menominee Nation and co-chair of the Missing and Murdered Indigenous Women Task Force Family & Community Impact Subcommittee.

Part of the intent of the in-depth feature was to delve into the origins of the crisis.

“With our data, you could go back to colonization, how we have not been included, acknowledged in anything when it comes to government,” said Fernandez. “We’re forgotten.”

As the feature explains, the U.S. has a complex and lengthy history of violence against Native people, including genocide, forced removal from ancestral lands and forced assimilation programs like boarding schools, which were designed to sever individuals from their family and culture.

According to the report, there were 590 distinct and sovereign Native nations with a combined 10 million to 45 million people before Europeans first arrived on the continent. By 1900, the Native population was only 237,000 — less than 0.5 percent of the original population, the report states.

Native communities “have been continually decimated by historic and contemporary policies,” becoming so small they are often “statistically insignificant,” said the report. “What does it really mean to be counted as American Indian or Alaska Native by systems that only ever intended to ensure you would someday never exist at all?”

This is what the task force is grappling with as they think about gathering meaningful data on missing and murdered Indigenous women and girls in Wisconsin.

Attorney General Kaul formed the 40-member, Indigenous-led task force when the state failed to pass legislation on the issue in 2019. A year later, they have identified their research team and plan to complete a report and a set of policy recommendations by the end of next year.

A similar task force in Minnesota led to the creation of the nation’s first state office on missing and murdered Indigenous people.

‘Humanity Issue, Not A Tribal Issue’

But a report is just the first step. Rufus said the final report will outline legislative and policy actions they’ll need representatives and residents to get behind when the time comes.

“We really need the public to rally and demand for this to be looked at, demand resources to address this issue,” said Rufus. “This is a humanity issue, it’s not a tribal issue.” 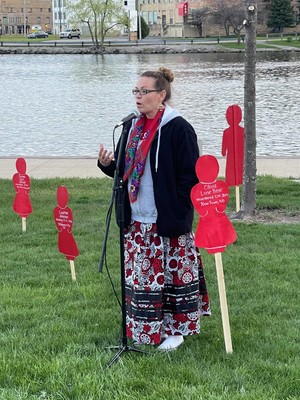 Kristin Welch, member of the Menominee Nation and MMIW Task Force, speaks at a Bridge Lighting on May 5, 2021 to honor the National Day of Awareness for Missing and Murdered Indigenous Women and Girls. Hannah Schmidt/WPR.

Another challenge has simply been drawing attention to the missing and murdered Indigenous women issue. The past year has brought some progress with the MMIW Day of Awareness, a spate of films and TV shows tackling the issue, and the appointment of Deb Haaland as Secretary of the Interior.

But advocates say the extensive media coverage on the Petito story, while hundreds of missing Native women and girls go unnoticed, only highlights the fact that disparities persist.

This is why features like the homicide report are so critical. It brings attention to the issue, and centers the voices of MMIW families and survivors, said Welch. She and Fernandez were among the many Indigenous women who shared their personal stories in the feature.

“I could have been a statistic,” said Fernandez, who is a survivor of domestic and sexual violence. In addition to her work with the task force, she is the founder and executive director of Maeqtekuahkihkiw Metaemohsak Woodland Women’s Group, a nonprofit that fosters healing and growth through traditional teachings.

It’s been beautiful to hear these family stories, said Welch, who is also the founder and executive director of Waking Women Healing Institute, a survivor-led nonprofit that was recently awarded a fellowship with MIT.

“But it’s also sort of heartbreaking that our relatives don’t really get to fully heal, that they don’t fully get to put that bundle of grief down, because they have to retell the story to get justice,” said Welch.

For many women, this is the bittersweet work of the task force.

“MMIW wouldn’t be known in this nation without the families that have demanded justice,” said Rufus.

Editor’s note: If you or someone you know is experiencing domestic violence, contact the National Domestic Violence Hotline at 1−800−799−SAFE (7233). A list of local Wisconsin domestic violence victim service providers for both Native and non-Native communities can be found at www.endabusewi.org/get-help.