A Big Week For The Near West Side

Groundbreaking for The New State, new mural unveiled and a week-long celebration, Near West Side Week. 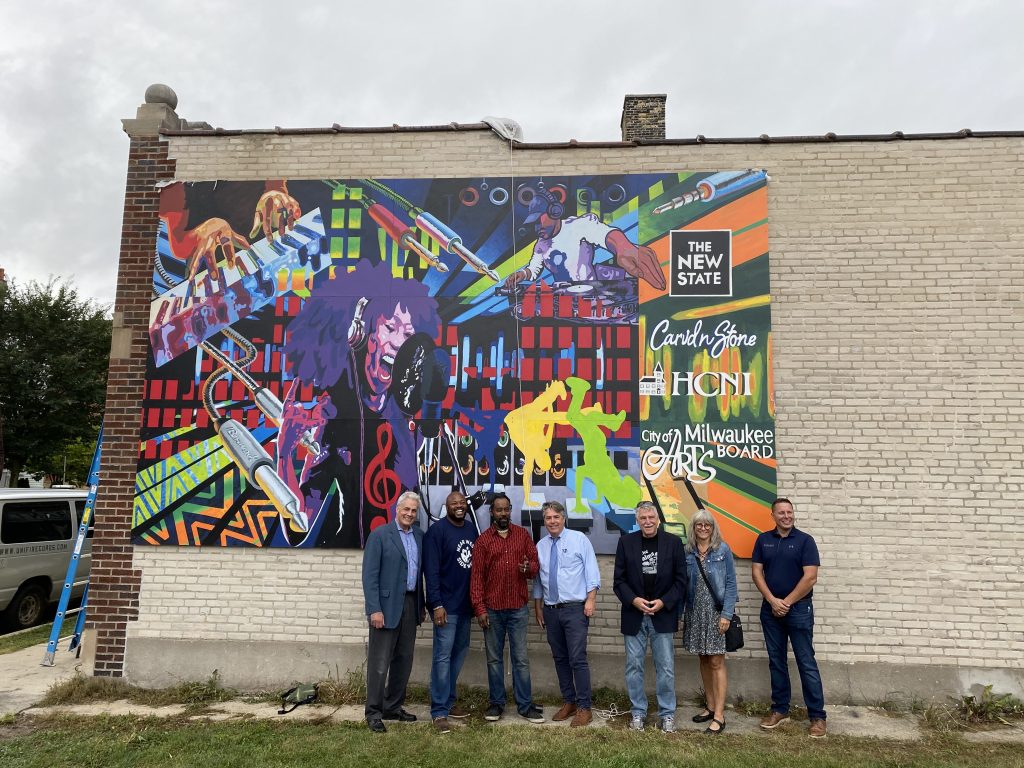 There was quite the event in the Concordia neighborhood Monday.

At the corner of N. 26th St. and W. State St. several dozen people gathered for a mural unveiling, a ground breaking and to inaugurate a new weeklong event dedicated to showcasing and supporting the communities on Milwaukee’s near West Side.

The headline event was the groundbreaking for a Community Music Park at The New State, a future all-ages performance venue and music hub complete with recording studios, a 415 person venue, a retail shop and a cafe.

“I look at it as almost a YMCA for music, a YMCA for arts.” said Promise Bruce, a member of The New State’s board and a host of “The Morning Grind with Promise” on HOT 105.7 Milwaukee.

The New State is being built in the former historic State Theater building. Constructed in 1915, the theater has had a number of uses, including as a dance hall, movie theater and strip club. The building went up in flames in 2017, after being vacant for decades. After the fire, several community residents worked to have the building redeveloped into something positive, rather than see it torn down.

The non-profit organization, The New State was formed by John Hennessy, president of the Hennessy Group, and Janice Vogt, a co-founder of Freespace, an organization holding seminars and shows for young people and musicians.

Bruce told Urban Milwaukee that The New State will have courses on music and the arts involving everything from music production to engineering and performance. But he also said there will be less formal programming, providing young people something to do after school or work. “Somewhere where you can learn and grow and create and feel like you have a space where you can be around like-minded individuals,” he said.

The New State is going to be for all ages, but Bruce said it’s especially important to him, and others involved, that it is a space for young people.

“I know a lot of young people, especially people of color, they need these outlets,” he said. “they need something to keep them out of trouble, they need somewhere they can feel safe and comfortable.”

The groundbreaking was held in conjunction with the unveiling of a new mural on the historic State Theater Building as well as the launching of Near West Side Week, a week long event promoting the community and businesses of the near West Side.

The new mural was commissioned by The New State, Historic Concordia Neighbors Inc., the Milwaukee Arts Board and Carvd N Stone, a local media company.

The mural was done by Brad Anthony Bernard, a local artist and an instructor at the Milwaukee Institute of Art and Design (MIAD).

The concept behind the mural is the “Energy of the youth, aspirations of the future and music,” Bernard said. His mural includes images of someone singing into a microphone, a DJ, breakdancing, and “some other elements that represent music production and engineering, since The New State is about performance arts and production arts.”

Bernard’s art work typically focuses on themes of African-American culture and history. This mural is a slight break from this, given that those themes aren’t the explicit subject of the mural, though he doesn’t abandon this signature element of his style. He noted that the images of breakdancing and DJ’s working the turntables “is enough indication of Black culture in America represented.”

Bernard said he was assisted on the project by “devoted, dedicated, talented” student interns from MIAD. “They were my extra arms, hands and eyes really.”

Near West Side Week

The mural unveiling and the groundbreaking served as the opening events for the first ever Near West Side Week.

Keith Stanley, executive director of the Near West Side Partners, said the new weeklong event was created after the COVID-19 pandemic made the organization rethink its annual awards luncheon, which was a major fundraising event for the organization.

What they came up with was a weeklong series intended to drive engagement with the local community and businesses in the area. It includes a walking tour, a walk and ride of the Hank Aaron State Trail, a scavenger hunt and a movie night.

Stanley said he hopes the week can encourage some to visit and experience the near West Side neighborhoods. “The Near West Side is unique, this is a slice of Milwaukee that can never be replicated,” he said.

And if you can’t make one of the week’s events, there’s also a promotion for restaurants in the area, including Triciclo Peru, 5 O’Clock Steakhouse and Daddy’s Soul Food & Grille, among others, where all you have to do is mention the “Near West Side Week” and you’ll receive a discount.