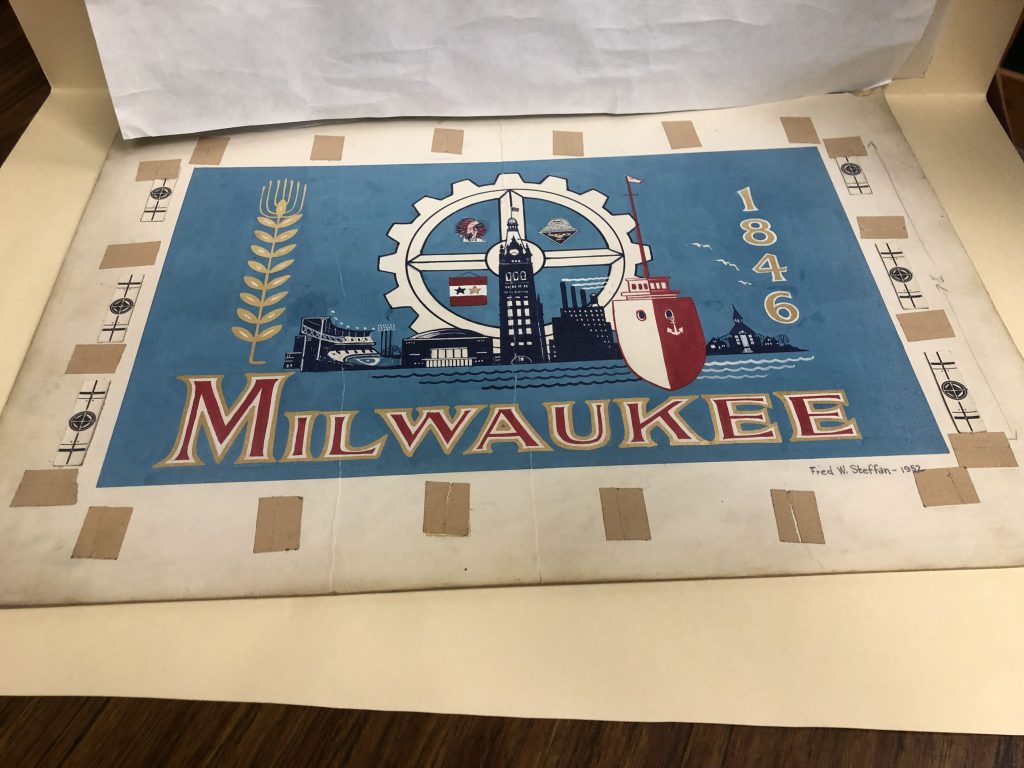 Sometimes you find a long-lost treasure when you clean out the archives. Such was the case for Milwaukee City Clerk Jim Owczarski and members of his office last month.

What is believed to be the original, handpainted design of the official City of Milwaukee flag was uncovered.

Designed by Alderman Fred Steffan in 1952, the Common Council formally adopted the flag in 1954. At that point Steffan, an artist known for his caricatures, was already a former alderman and working as an artist for the Joseph Schlitz Brewing Company. He was on hand to present an actual copy of the flag to the council in 1955.

Owczarski commissioned Douglas Stone of Fulkerstone Fine Arts Conservation to review the painting and suggest a preservation process. That work included a deacidification spray and an acid-free cover sheet.

The next step will be to fully digitize the flag. It will be uploaded to Wikipedia, replacing a replica created by user Svgalbertian that has been widely used for modern reproductions. Svgalbertian’s version simplifies a number of elements of Steffan’s design, including the many buildings.

After digitization, the original artwork will be framed and put on display.

Steffan’s design is really a flag of flags. The artist, a member of the Milwaukee Art Commission, took elements of submissions from a prior contest to create his flag. He told The Milwaukee Journal in 1953 “maybe the design’s 40% original.”

His design of a design also wasn’t without outside meddling. The commission, according to a newspaper report, made Steffan modify his design to use a darker blue in the background before forwarding it to the Common Council for adoption.

Get a daily rundown of the top stories on Urban Milwaukee
Steffan’s agglomeration features  City Hall, Milwaukee County Stadium, the Milwaukee Arena (today’s UW-Milwaukee Panther Arena), a Native American in headdress (likely an homage to the Milwaukee Braves baseball team), a spike of barley (a reference to beer), a church, a house, a school, a ship, a gear, 1846 (for the year of the city’s founding), birds, waves, a lamp (a reference to the Milwaukee Public Library) and another flag (a two-star flag that is believed to be a nod to military veterans).

But there is even Milwaukee more embedded in the piece. It was hand-painted with acrylic paint on paper from Burghardt & Sons, today’s New Berlin-based Burghardt Sporting Goods.

Steffan served on the Common Council from 1948 to 1952 and made full use of his artistic abilities during that time. According to a newspaper report, he was known for hand-drawing cartoons to persuade his fellow council members to adopt his ideas. He passed away in 1958 at the age of 43 following a heart ailment.

And while the future of Steffan’s original work is now secured, his design could meet the fate of those before it. For at least the third time since Steffan’s design was selected, the council is again debating a new flag.

It was in part spurred by a 2015 TED Talk by podcaster Roman Mars.

“Nothing can quite prepare you for one of the biggest train wrecks in Vexillological history,” said Mars of the Milwaukee flag’s place in field of flag design. A 2004 survey by the North American Vexillological Association rated Milwaukee’s flag third worst.

A formal request for proposals to hire an administrator for a new design process and the necessary funds to execute it have not advanced since first being discussed in 2019. That was spurred by the growing adoption of another design.

The People’s Flag of Milwaukee, designed by Robert Lenz, was selected in 2016 from an unofficial design contest led by Steve Kodis with participation from multiple city officials including Mayor Tom Barrett.

The lack of an official designation for Lenz’ “Sunrise Over the Lake” design hasn’t stopped it spreading. The design can be found on hats, t-shirts, beer cans, face masks and flags. But questions remain, at least on the council and Milwaukee Arts Board, on how inclusive the process that designed it was.

Steffan’s design stemmed from a process that began in 1942 and ended in 1954. So if history is any indication, because the council started this process with a 2018 action, his flag will be safe until at least 2030. And regardless of what anyone thinks of it, Steffan’s design is the longest-serving official flag in the city’s history. 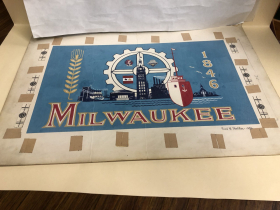 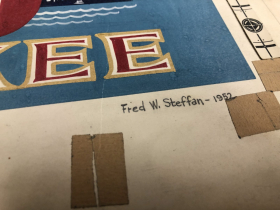 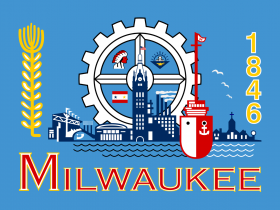