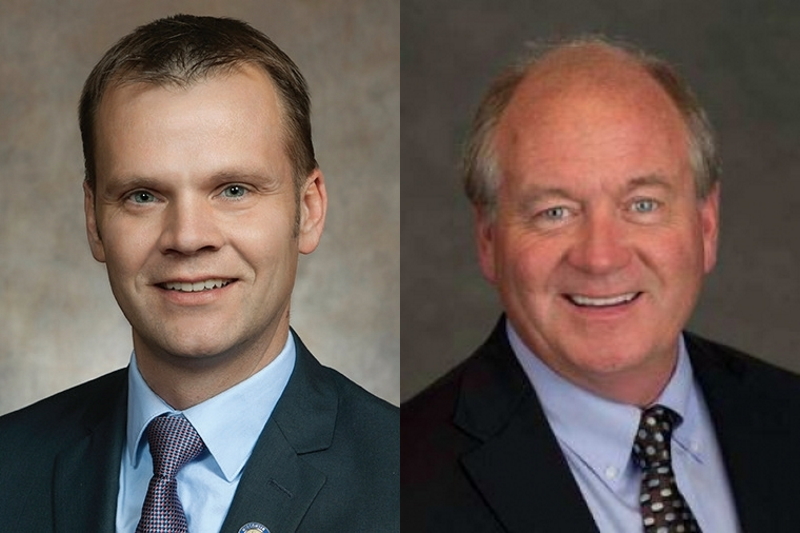 Fred Prehn, the chair of the Natural Resources Board (NRB) who has generated controversy and complaints for refusing to vacate his seat after his term expired in May, coordinated and communicated with high-profile Republican officials and lobbyists as he planned to maintain Republicans’ grip on the state’s conservation policy, emails obtained by the Wisconsin Examiner show.

Prehn’s term expired on May 1 and Democratic Gov. Tony Evers has nominated his replacement but even so, Prehn has refused to leave his post, citing a Wisconsin Supreme Court decision from the 1960s that he says allows him to stay on the board until his replacement — Ashland educator Sandra Naas — is confirmed by the state Senate.

Yet even though he’s said the law allows him to stay and he’ll leave once the Senate acts, Prehn has been working both sides. His emails show that as early as May 25 he was working with staff members of Senate Majority Leader Devin LeMahieu (R-Oostburg) to hold onto power.

LeMahieu controls when, or if, Naas receives a vote in the Senate. On May 25, his appointments director, Erin Karow, emailed Prehn about a phone call they’d had earlier that day and shared a memo written by the Legislative Reference Bureau outlining the statutory provisions that Prehn is relying on to remain in his post.

Earlier this month, Attorney General Josh Kaul filed a lawsuit against Prehn seeking to boot him from the post. LeMahieu and Assembly Speaker Robin Vos (R-Rochester) have hired taxpayer-funded attorneys to defend Prehn on the Legislature’s behalf.

Throughout Evers’ term, Republican legislators have delayed, or refused to vote on, Evers’ nominees. In a statement, LeMahieu said that he’s working to make sure the people’s voices are accounted for in the appointment process.

“This is not about any one appointment or appointee. It’s about upholding the statutes and practices of the Legislature,” LeMahieu said. “The advice and consent of the Senate is a duty we take seriously. We will not allow the people’s voice in the appointment process to be eroded.”

Facing immense pressure to step aside, Prehn has dug his heels in over the summer — insisting that his decision to remain on the board is not guided by politics but his belief that his leadership is necessary.

“Maybe this isn’t about politics,” Prehn wrote in an email explaining his decision to the leader of an environmental group. “Maybe it’s about my belief in some of the major topics that face Wisconsin I will want to deal with.”

But Prehn’s emails show that politics were never far from his mind as he refused to give up control.

Naas taking her seat would flip the Natural Resources Board from a majority of Republican appointees to majority Democratic — a fact Prehn was especially concerned about.

“Unbelievable they can pull this off and take control and ram through whatever they want,” Prehn wrote in late June to Gerald Whitburn, a former member of the UW System Board of Regents and cabinet secretary under Republican Gov. Tommy Thompson.

Concerned about how Democrats would shift policy at the Natural Resources Board and the Department of Natural Resources (DNR) if they gained a majority, Prehn’s emails show the most important issue motivating his fight to stay on the board — wolves.

Wolf hunting in Wisconsin has become one of the most controversial and polarizing issues under the NRB’s control. A wolf hunt held last winter, only conducted after a lawsuit forced it, far exceeded the established quota. Earlier this month, Prehn cast a crucial vote to set the quota for this fall’s wolf hunt at more than double what DNR biologists had recommended.

“You are now officially the #1 enemy of wolves. :‐),” fellow board member Greg Kazmierski wrote to Prehn in June.

Even before his term had expired, Prehn was communicating with Scott Meyer, a lobbyist for Wisconsin Capitol Solutions. Meyer was heavily involved in Prehn’s decision to remain on the board, the emails show, and played a cheerleading role as Prehn faced public backlash.

As the criticism rolled in, Meyer was willing to insult and threaten people who were questioning Prehn’s decision. After the Journal-Sentinel’s outdoors editor Paul Smith published a story about Prehn refusing to leave, Meyer was furious about the tone and framing of Smith’s emails to Prehn and his wife, Linda.

“What a petty little f*** wish I was feeling better I would throat punch him little toughie ill show a women how smart I am… pissant,” [sic] Meyer wrote on May 24. Smith declined to comment on Meyer’s email.

Meyer, according to the Wisconsin Ethics Commission, is a registered lobbyist for Americans for Prosperity, the powerful conservative political organization funded by the billionaire activist Koch brothers.

Meyer is also a lobbyist for Hunter Nation, the Kansas-based organization that successfully sued the DNR last year to force the controversial wolf hunt. Hunter Nation, represented by conservative legal outfit the Wisconsin Institute for Law & Liberty, has also attempted to intervene on behalf of Prehn in Kaul’s lawsuit to remove him.

“Hunter Nation represents a valuable perspective in the suit, which is the voice of the regulated community,” Hunter Nation’s attorney said. “And they would like to intervene to argue that Chairman Prehn lawfully holds over in his seat.”

Prehn also frequently communicated with other prominent Madison lobbyists. He shared a few emails with Scott Manley, the chief lobbyist for the Republican-aligned Wisconsin Manufacturers & Commerce.

Throughout the summer, as the outcry against Prehn grew, his emails show him complaining to Republican officials about the public reaction to his decision.

“It’s only going to get worse unbelievable,” he wrote to Meyer and U.S. Rep. Tom Tiffany in May.

Prehn did not respond to a request for comment.

Emails show Prehn coordinated with Republican officials, lobbyists as he clings to expired seat was originally published by the Wisconsin Examiner.

One thought on “Prehn Worked With Republicans To Keep Expired Seat”