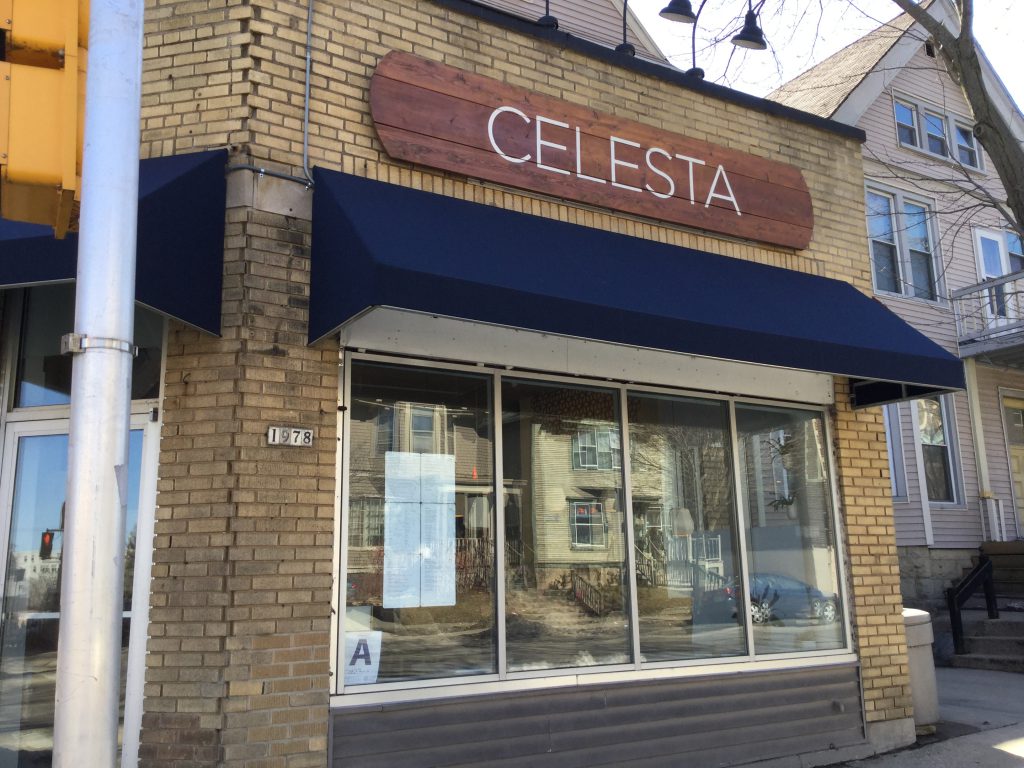 The space formerly home to Blue’s Egg at 4195 N. Oakland Ave. will soon have a new restaurant. Black Shoe Hospitality, the group behind Maxie’s Blue’s Egg and Story Hill BKC, announced via a press release that it will open Buttermint Finer Dining & Cocktails, the group’s most upscale restaurant to date and one that takes inspiration from early 1960’s style restaurants yet is updated for today. The restaurant will include a happy hour and dinner service Tuesday through Saturday, with an upscale brunch on Saturday and Sunday. The press release acknowledges the current hiring climate, noting the restaurant’s officially opening date will depend on when a staff is established.

Celesta to be Replaced by Lafayette Place

Fans of the recently-closed plant-based Celesta will be pleased to know that a new vegan cafe will take its place. Lafayette Place, expected to open in either late summer or early fall, will take over the space located at 1978 N. Farwell Ave. The cafe is being opened by Amy Plennes and Angela Wierzbinski, the owner and operator duo behind The National at 839 W. National Ave. Maredithe Meyer reports:

(Plennes and Wierzbinski) were especially drawn to the bustling East Side neighborhood, which boasts more residential activity than Walker’s Point.

Ultimately, the hope is that expanding their business footprint will boost their own financial recovery coming out of COVID-19 pandemic as well as breathe new life into the East Side dining scene.

The Lafayette’s 100% vegan menu will include breakfast sandwiches, smoothies, coffee, tea, and kombucha. It will be open Thursday through Sunday for dine-in as well as carryout.

Tess restaurant, a fine-dining establishment that has been quietly operating on the East Side since 2002, has lost its long-time chef. Martin Magana, who has worked at Tess since 2013, is shifting his focus to his Trouble Makers Cocina pop-up restaurant — a project that he hopes will plant roots in Bay View with a brick-and-mortar location. Trouble Makers Cocina is a collaboration between Magan and Milwaukee chef Arnie Gonzalez, and they will also have a catering branch called La Casita de Frida. Their Facebook page touts “Mad Mexican” food. Carol Deptolla reports:

Trouble Makers has other ideas for projects, like late-night weekend pop-ups around the city that pair elevated Mexican appetizers with cocktails, he said.

Magma has been inspired by the work going on at Milwaukee bars and restaurants. “It’s just amazing, seeing how people have gotten so creative,” he said.

In the meantime, Trouble Makers Cocina puts on a monthly dinner at Sugar Maple bar, 441 E. Lincoln Ave. The next is Sept. 29; Trouble Makers’ Facebook and Instagram accounts will announce when ticket sales go live on Eventbrite.com.

Popular burger and custard stand MooSa’s second location is officially open, just in time to help Milwaukeeans beat the recent heat. The new location, operating out of small retail space inside of the BP gas station at 405 N. 27th St., will serve the usual MooSa’s fan favorites: hot dogs, burgers and cheese curds, but has an expanded menu that includes wings, chicken tenders and fried chicken. While the original MooSa’s stand is a seasonal business, the new location will be open year-round. Lori Fredrich reports:

Musa says that the new restaurant is currently planning a grand opening celebration, which is slated to take place later this week or early next. During the celebration, guests can score free custard with the purchase of any MooSa’s burger.

In April, Urban Milwaukee reported that a new coffee and organic smoothie bar was planned for the Bay View neighborhood at 2432 S. Kinnickinnic Ave. Karma Café & Smoothie Bar serves a variety of coffee drinks, smoothies and acai bowls as well as some breakfast foods — all part of a menu that was inspired by owner Kelly Wei’s experience visiting Indonesian vegan cafes. Karma Café & Smoothie Bar is open Sunday 8 a.m. to 2:30 p.m., closed on Monday, open Tuesday through Friday from 8 a.m. to 5 p.m. and Saturday from 8 a.m. to 2:30 p.m.

On August 22, a post on Mistral’s Facebook page hyped the restaurant’s fancy cheese curds. A mere three days later, a brief post revealed the restaurant had permanently closed. The post thanks its patrons for their business, and asks that patrons continue to support the Avalon Theater, The Rosebud and Times Cinema — all theaters owned by Mistral owners Jane Schilz and Lee Barczak. A report by Deptolla revealed that the owners chose to close the restaurant due to slow business and a “dearth of qualified kitchen and server staff.”