But Trump, Tiffany, others on far right oppose helping settle Afghans in U.S.

If there is a single consensus about the American intervention in Afghanistan, it is that those who helped America deserve American protection. The most frequently mentioned Afghans are those who served as translators to American troops. But there are others at risk and who, along with their families, are likely to be targets of reprisals if they stay in the country. They have “a well-founded fear of persecution for reasons of … political opinion,” to quote the definition by the UN Refugee Agency. Once outside Afghanistan, they would easily meet the United Nations’ definition of political refugees.

With the announced evacuations of Afghans who served U.S. troops to Fort McCoy and other army installations, this consensus quickly ran up against a new kind of nimbyism (“not in my backyard”), including in Wisconsin. For example, the Republican Party of Green County posted the following to its Facebook page:

NOT IN OUR BACKYARD!! This is absolutely unacceptable. Not only is the current administration absolutely responsible for the catastrophic withdrawal in Afghanistan, they NOW want to import hundreds of thousands of unverified Afghan refugees into OUR Wisconsin backyard?  We MUST NOT let this happen! We need not look any further than Minnesota to see the result of what importing hundreds of thousands of Islamic refugees into secular communities will do to our state! Take action and call your State and Federal elected officials! Tell them “enough is enough”! It’s time to take back our country!!

Disturbing reports that 5000 Afghans per day are headed to the US – including Fort McCoy in Wisconsin. Afghanistan is a dangerous country that is home to many dangerous people.

Former President Donald Trump tried to have it both ways. On Monday August 16th of this year, he issued the following statement:

“Can anyone even imagine taking out our Military before evacuating civilians and others who have been good to our Country and who should be allowed to seek refuge?”

Two days later, he issued a new statement following a photo of a plane carrying an estimated 640 civilians, mostly Afghans:

“This plane should have been full of Americans. America First”

Logically the question of undocumented immigrants who are in the United States illegally and of refugees from Afghanistan are separate issues. Yet opponents of the Afghan refugee evacuation appeal to many of the same fears. These include the fear of a more diverse American population and the claim popular on the far right that both represent a plot to “replace” the existing population with people who come from countries very different than the United States. Thus, it may be impossible to separate the two issues. 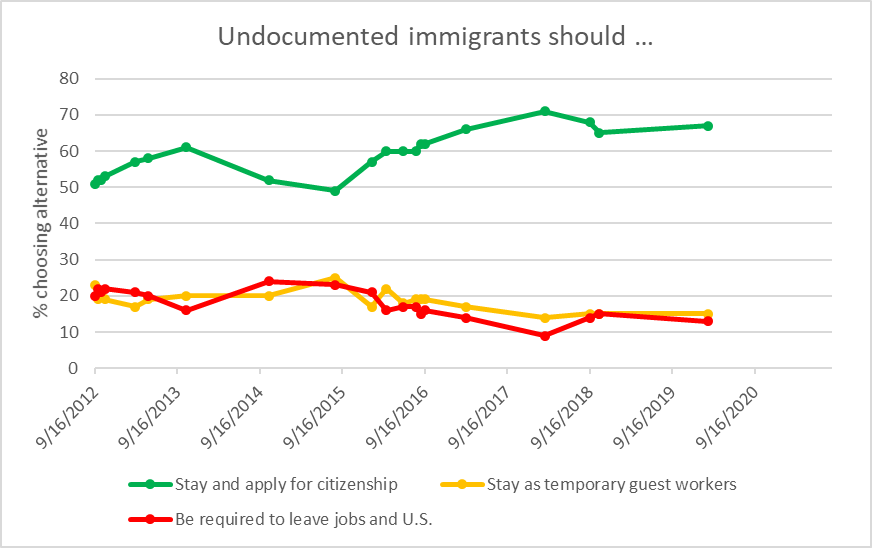 Some research has investigated possible links between religious affiliation and attitudes towards immigrants. To what extent does the reluctance towards accepting Afghan refugees reflect suspicion of Islam?

The next graph shows the responses according to the self-reported religion of the over 9,000 people who have answered this question in Marquette polls over the years. Those most favorable to allowing immigrants to become citizens are those who report they have no religion. Born-again Protestants as a group are least supportive of a path to citizenship. Still, 53% of them supported that option. 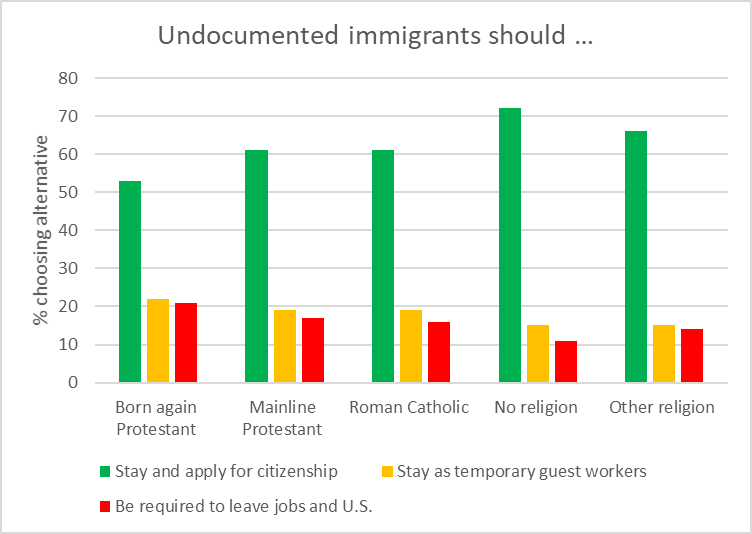 Another analysis of the connection between religious affiliation and openness towards immigrants was offer by Samuel Perry, a sociologist at the University of Oklahoma. Based on February 2021 responses to a poll called the Public Discourse and Ethics Survey, Perry included the graph shown below. In it, longer bars represent more hostility to refugees. According to this survey, white evangelicals are the most anti-refugee, while black Protestants & atheists are the least likely to hold anti-refugee prejudice. White evangelicals made an exception when the refugees were Christian.

Several prominent Republican office holders have come out strongly for the proposition that the U.S. should help Afghans who worked for the U.S. as translators or in intelligence and other roles to come to the U.S. Prominent among those are Senator Mitt Romney and Governor Spencer Cox, both of Utah, and Senate Minority Leader Mitch McConnell. But as a Washington Post article reports, a number of the nativist wing of the party that backed Trump’s “America First” agenda is joining the Green County Republicans and Representative Tiffany to claim that the Afghan refugees pose a security threat. Prominent opponents of allowing Afghani translators and others to settle in the U.S. include Fox News’s Tucker Carlson, Rep. Marjorie Taylor Greene, and former top Trump adviser Stephen Miller.

As the next graph shows, a recent CBS/YouGov poll finds this argument rejected by most Americans, including most Republicans. 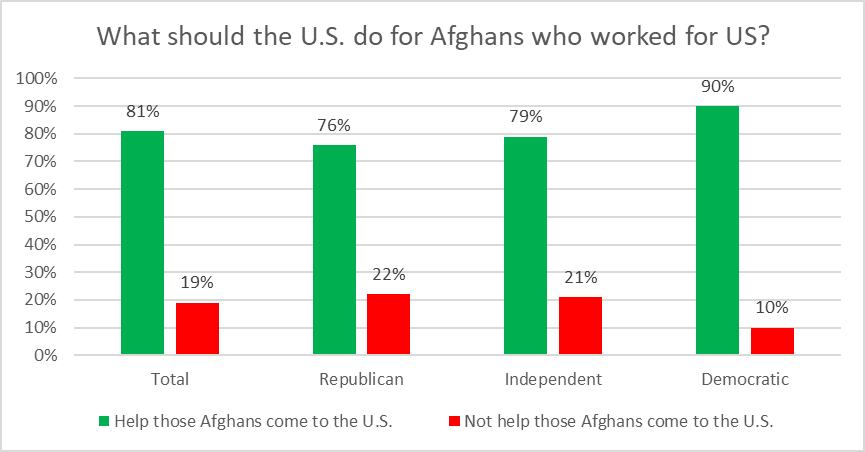 What should the U.S. do for Afghans who worked for US?

The Afghans qualifying as refugees put themselves at risk by helping the United States. Despite scattered efforts to spread fear about “dangerous people” from a “dangerous country,” allowing them to seek refuge in the United States enjoys widespread and bipartisan support.