Outside a dispensary in Illinois, the state lawmaker called for legalization.

By Melanie Conklin, Wisconsin Examiner - Aug 11th, 2021 11:47 am
Get a daily rundown of the top stories on Urban Milwaukee 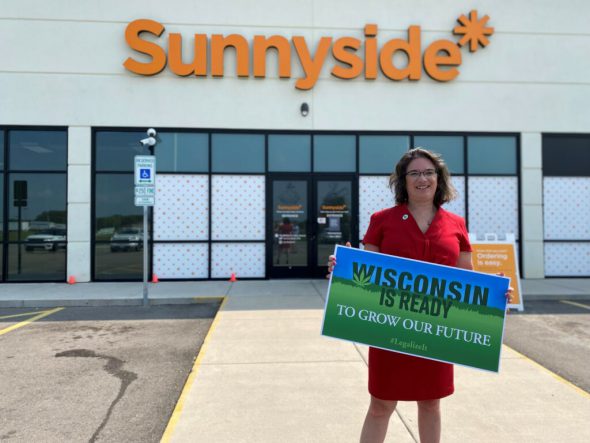 In the large parking lot in front of the Sunnyside Dispensary— right across the border from Wisconsin in South Beloit, Illinois — Sen. Melissa Agard (D-Madison) announced a bill to fully legalize cannabis in Wisconsin, for medicinal purposes as well as for adult use over the age of 21.

“Wisconsin is ready for legal cannabis,” she said. “Communities most affected by over-enforced and outdated drug policies are ready. Our farmers are ready. Let’s do this together — let’s legalize cannabis.”

Agard has been introducing this bill for five legislative sessions now since 2013, and it has never received a public hearing because Republican leaders oppose legalization. Assembly Speaker Robin Vos has indicated he would be open to medicinal use of marijuana with a prescription, but not full legalization.

The state Senate — first under former Majority Leader Scott Fitzgerald and now under Majority Leader Devin LeMahieu — does not have the votes to pass even medical marijuana legalization, both leaders have said, despite interest from several GOP members in some sort of marijuana policy reform.

When Agard first introduced the bill in 2013, she said people warned her that she should not take up the issue as it would “probably be the end of my career,” she said, while some Sunnyside customers delayed their shopping to stop and listen to her speak.  A Marquette University Law Poll from 2019 found that nearly 60% of Wisconsinites support full legalization of marijuana, and 83% support legalizing medical marijuana.

Agard’s bill is similar to the full legalization proposal that was in Gov. Tony Evers’ budget, which Republican leaders tossed out, denigrating it as a component of “a liberal wish list” that they would not let pass in Wisconsin. It would make it legal to have up to 2 ounces and six plants.

A key component of her bill is addressing Wisconsin’s “egregious racial disparities.” To that end, Agard’s bill would create community reinvestment grants, using half of the tax revenues — which Evers’ budget estimated at $166 million — to help “underserved communities and communities wronged by the prohibition of cannabis.” She cited studies she said show that crime does not soar with legalization, and said that Black people are four times more likely to be charged with a crime tied to marjiuana than their white counterparts, “despite usage rates being largely the same.”

Marijuana would be taxed in the same manner alcohol is taxed under her bill. Agard was joined at her news conference by state Reps. Mark Spreitzer (D-Beloit) and David Bowen (D-Milwaukee) as well as some Beloit officials.

“Wisconsin and communities like Beloit are losing out on millions in tax dollars each year because recreational marijuana is legal just over the border, but not here,” said Spreitzer.

“Not only will this proposal allow our state to right past wrongs, it will also open countless doors to our farmers and agricultural sector to participate in a growing industry,” Agard added. “Wisconsin can no longer ignore the cannabis industry — we are losing out on millions of dollars and family sustaining jobs to our neighboring states. We are losing money that we could be reinvesting to help support our friends and neighbors and make our state a place where people want to live, work, play, raise a family and plant their roots.”

Her bill also contains a path toward expungement of criminal records for those previously convicted of some cannabis-related crimes. “I’ve said this countless times — the most dangerous thing about cannabis is that it remains illegal in Wisconsin,” said Agard.

She also advertised legalization as a boost for small farmers and Wisconsin agriculture.

“We need to take a fresh look at this blooming industry and take advantage of many positives it can provide to our state,” said Agard.

Agard’s staff says that the senator did not, however, make any purchases during her visit to the Sunnyside Dispensary in South Beloit, Illinois. It would be illegal under Wisconsin law to bring it back across the border into our state.