The Pandemic Changed Ideas About Incarceration

By Robert Chappell and Shereen Siewert, Wisconsin Center for Investigative Journalism - Jul 31st, 2021 02:05 pm
Get a daily rundown of the top stories on Urban Milwaukee 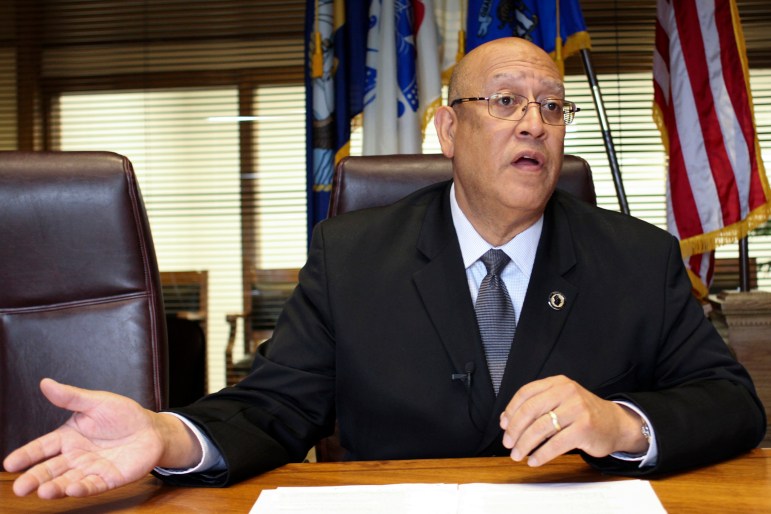 Kevin Carr, secretary of the Wisconsin Department of Corrections, says his agency during the pandemic instructed parole and probation officers to incarcerate only those violators who posed a risk to the public. “You can assess the nature of the contact and determine that there’s no reason to hold that person in custody for three days or more, disrupt their lives, put their jobs and housing at risk,” he says. He is seen during an interview with Wisconsin Watch at the department’s headquarters in Madison, Wis., on June 19, 2019. Credit: Alisa Ivanitskaya / Wisconsin Watch

Even before COVID-19 began to snake through Wisconsin’s jails and prisons, Chad Billeb saw a storm coming.

As chief deputy for the Marathon County Sheriff’s Department, Billeb was already studying ways to reduce the number of inmates in the jail, a challenge that county leaders have been examining for years. As early as 2017, overcrowding was such a central issue that staff and outside experts concluded that the county would need a new $75 million jail.

The pandemic’s arrival brought new urgency to the overcrowding problem.

A similar story played out in jails and prisons across Wisconsin and the country, triggering experiments in public health and criminal justice.

Nationwide, corrections officials faced the fact that incarcerated people exposed to the coronavirus were getting sick and dying at a rate unparalleled in the general public. The  scramble to protect the health of inmates, staff members and surrounding communities meant incarcerating fewer people — a long-standing demand of criminal justice reform advocates.

Combined, Wisconsin’s state prisons and local jails held fewer than 30,000 inmates in December 2020, the lowest number in more than 20 years, according to Department of Corrections data.

While corrections and law enforcement officials view their efforts as successful, those numbers aren’t good enough for most advocates.

“I think everyone was ill-prepared,” said Anthony Cooper, coordinator of re-entry services at the nonprofit Nehemiah Center, which aims to strengthen Madison’s African-American community. He said he saw a mix of right and wrong moves from jail and prison officials. “The people that were incarcerated were still looked at as less than,” he said.

One out of every two inmates in Wisconsin’s prisons have tested positive for the virus, a rate four times higher than the state’s general population, according to the DOC.

One in 737 prisoners died of COVID-19 complications, a rate of 135 per 100,000 people — higher than the state rate of 124 per 100,000 residents. In Marathon County, an October outbreak traced to an inmate who initially tested negative for the virus, only to test positive three days later, led to dozens of infections among inmates and staff.

The sickness and death inside often poorly ventilated jails and prisons prompted pleas for early or temporary releases. But a range of other actions ultimately eased crowding. 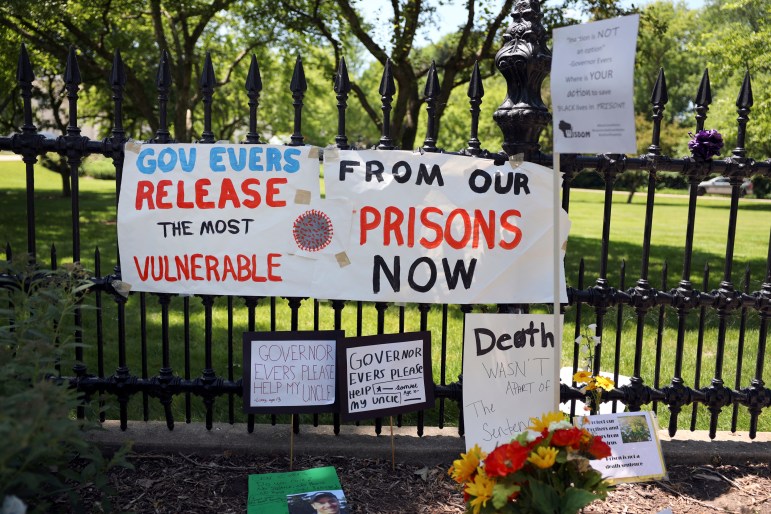 Signs and posters outside the Wisconsin governor’s mansion in Maple Bluff, Wis., on June 18, 2020, are part of a “Drive to Decarcerate” event. Those attending urged Gov. Tony Evers to release inmates from Wisconsin’s overcrowded prisons to slow the spread of COVID-19. A range of other actions ultimately eased crowding in jails and prisons during the pandemic, but advocates say the state has a long way to go toward addressing crowding more broadly. One out of every two inmates in Wisconsin’s prisons has tested positive for the virus, a rate four times higher than the state’s general population. Credit: Coburn Dukehart / Wisconsin Watch

Dane County’s jail population dropped from over 700 to about 570, roughly 70 of whom were outside the jail building on electronic monitoring. Dane County Sheriff’s Capt. Kerry Porter, who oversees security services including the jail, said the county reduced the population as much as possible but also needed outside help.

Porter said judges stayed many sentences, which, along with a hiatus on jury trials, slowed the intake of inmates at the jail. The court system also offered what he called “COVID release warrants,” which gave law enforcement discretion to decide not to arrest someone with an open warrant if they didn’t pose an immediate threat to the public.

Porter said the sheriff’s office also encouraged municipal law enforcement agencies to “exercise discretion” if they could cite someone or refer charges to the district attorney without an arrest.

Police elsewhere did the same.

The DOC affects county jail populations when it petitions courts to revoke parole or order people incarcerated who violate conditions of their probation. DOC Secretary Kevin Carr said his agency instructed parole and probation officers to incarcerate only those violators who posed a risk to the public.

“Our primary mission is public safety,” Carr said. “You can assess the nature of the contact and determine that there’s no reason to hold that person in custody for three days or more, disrupt their lives, put their jobs and housing at risk.”

Carr acknowledged that the agency before the pandemic would routinely incarcerate people who are arrested for violating probation or parole — even when they posed no public safety threat.

As of July 5, that population had risen back to 2,270, still well below the normal number.

Carr said that change in criteria and reduction in holds and sanctions were part of a longer-term plan that began before the pandemic.

“But it was certainly accelerated by the pandemic,” he said.

Today, with an average daily population of about 244, it might be tempting to view overcrowding as solved. 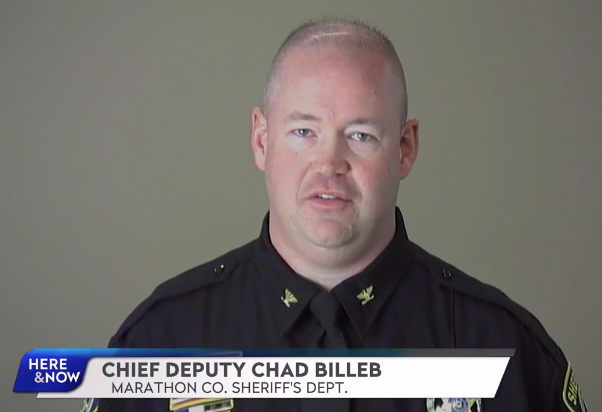 Marathon County Chief Deputy Chad Billeb says the county will have a hard time managing the criminal cases that piled up because of COVID-19. “Pandemic or no pandemic, if we can’t get a handle on the massive backlog in the court system, if something doesn’t move, we’re going to need a 1,000-bed jail,” he says. Billeb is seen during a 2017 appearance on PBS Wisconsin’s Here and Now program. Credit: PBS Wisconsin / PBS Wisconsin

But that would fail to envision the future of the jail, which has a maximum capacity of 279 inmates and a recommended cap of 250. An enormous disparity persists between the number of pretrial inmates and those who have been sentenced, Billeb said.

In mid-June, for example, only 45 of 244 Marathon County inmates had been sentenced. Of those, 28 were serving their sentences on electronic monitoring, rather than spending time in a cell. Some of those inmates are in juvenile detention centers, while a handful were waiting to be transferred to other facilities or jurisdictions. The rest – 140 inmates – were awaiting trial.

The court system already faced a backlog before the pandemic due to a lack of prosecutors, public defenders and judges to handle growing caseloads in Marathon County. That problem only worsened when the pandemic paused jury trials for more than a year due to safety concerns. Marathon County District Attorney Theresa Wetzsteon said her office has at least 400 additional pending cases now compared to 15 months ago.

The backlog has police, prosecutors and judges on edge.

“Pandemic or no pandemic, if we can’t get a handle on the massive backlog in the court system, if something doesn’t move, we’re going to need a 1,000-bed jail,” Billeb said. “The tipping point is coming.”

County officials statewide implemented several strategies to reduce the jail populations during the pandemic. Police and prosecutors summoned defendants into court rather than taking them into custody. Fewer “failure to appear” warrants were processed. Many court appearances were rescheduled, and probation and parole agents sought to avoid jail sanctions. The question loomed: Was jailing someone worth increasing their risk of infecting themselves and others?

Early studies suggest decarceration efforts lowered infection rates in some jails. But for all those efforts, Billeb said, the influx of people coming into the system hasn’t slowed. And the biggest issue he sees is not with the law enforcement officers on the street.

“It’s the system that’s not moving anything along,” Billeb said.

A system on overload

Wisconsin’s local jail populations declined by more than one third last spring, according to a Wisconsin Policy Forum report released in March. Populations have since risen but remain 24% lower than they were a year earlier, DOC figures show.

That’s largely due to the state’s refusal to bring new inmates into the prison system, Mergendahl said. Inmates who would normally be sent to Dodge Correctional after sentencing instead remained in county jails that were ill-equipped for long-term stays. The percentage of Marathon County inmates awaiting transport to secure facilities grew, even as the jail population overall shrank.

When the state began accepting inmates again in late April, Billeb said, dozens were transferred to state prisons over a two-week span. But those awaiting trial must continue to wait as courts work through a pandemic-induced backlog of cases.

On any given day, more than 85% of Marathon County inmates are in custody for non-violent offenses, with only a fraction sentenced for crimes they are convicted of committing.

In Dane County, many people have remained in custody for the entire pandemic while awaiting trial, said Porter, the sheriff’s captain.

Prosecutors are calling for dramatic changes to reduce court backlogs.

“We may not have the number of people in jails taking up space, but their cases are accumulating at an alarming rate,” said Wetzsteon, the Marathon County district attorney.

Some changes permanent, others in flux

The pandemic forced courts to adapt to keep cases moving forward. Wetzsteon said she hopes some of those changes, such as video access to court hearings, will be permanent. Video appearances streamline the process for attorneys and allow “tremendous access” for victims to appear in court, she said.

But allowing the accused to show up on Zoom rather than in person requires less accountability, she said.

Judges will decide whether to continue video court.

“It’s certainly more cost-effective and more efficient for us to use video visitation for routine court matters, like a scheduling conference,” Carr said. “Why would you drive somebody from Stanley, Wisconsin down to Milwaukee for a five-minute scheduling conference, when you can do it over the internet?”

However, not all jails are equipped with adequate facilities for such video conferencing; Dane County Jail officials faced criticism for forcing inmates to appear via video through the food slots in their cell doors, which many advocates called dehumanizing.

Carr said video visitation can also provide a bit more humanity for inmates. As important as in-person visits are, they don’t allow glimpses into homes.

“(In in-person visits) they couldn’t see the dog that they left behind, or they couldn’t see somebody carrying their niece or nephew in the background, or what the house looks like now, or the Christmas tree, or whatever they wanted to see,” Carr said.

This piece is part of a collaboration that includes the Institute for Nonprofit News, The Beacon/KCUR 89.3; Bridge Michigan/Side Effects Public Media; Cicero Independiente/South Side Weekly; Detour Detroit/Planet Detroit/Tostada Magazine; Evanston RoundTable/Growing Community Media; Madison365/Wausau Pilot & Review; and MinnPost/Sahan Journal. The project was made possible by a grant from the Robert Wood Johnson Foundation with additional support from INN’s Amplify News Project and the Solutions Journalism Network. Read more at https://inn.org/inn-collaborations/ac-life-after-covid/ .