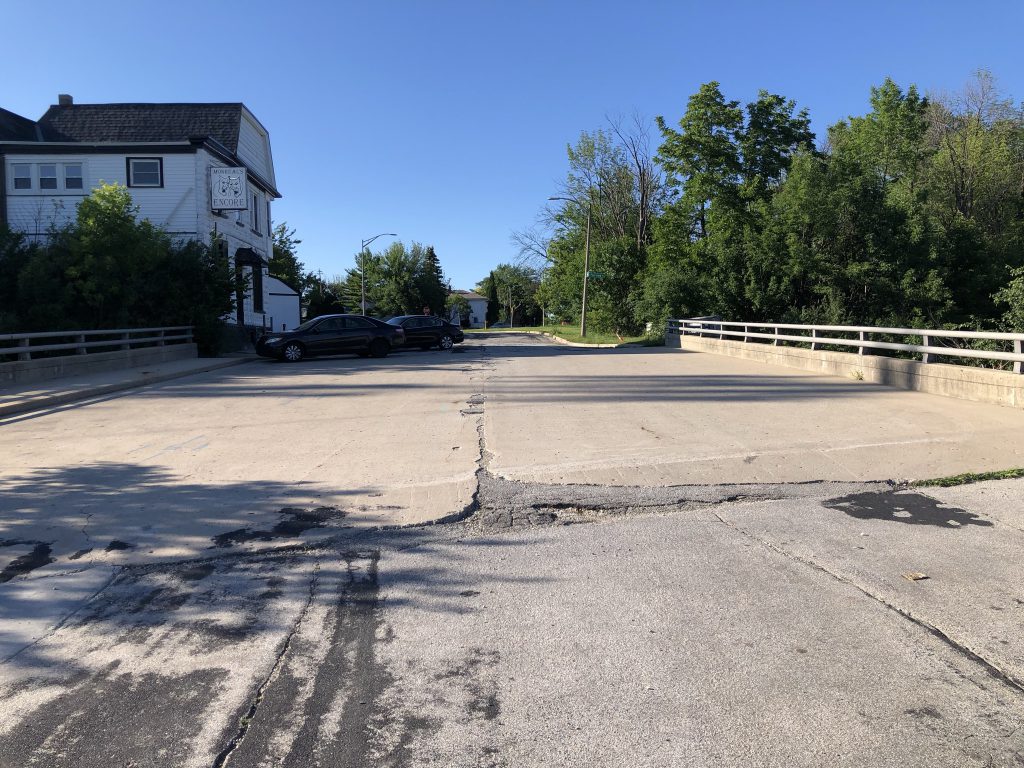 Milwaukee has many bridges. Many are well known, like the Hoan Bridge and more than a dozen operable river bridges. But the city is dotted by many other lesser known bridges, and four of them will be rebuilt this year.

Construction work is underway on all four projects, with the first two scheduled to wrap up in October.

The W. Villard Ave. bridge over the Lincoln Creek (near N. 23rd St.) is being redecked. The $2.46 million project, scheduled to be completed in October, is being staged to maintain one-way traffic during the project. The bridge was originally built in 1955 and first proposed for rehabilitation in 2013. But the rehab work, which includes replacing the roadway and railings, was delayed due to a lack of funding. The city is partnering with the Wisconsin Department of Transportation (WisDOT) on the project. Federal funds cover 80% of the project cost. The rehab work is expected to add 45 years to the bridge’s life. Prior to construction, the bridge saw 6,800 vehicle crossings per day.

Work started in June on replacement of the W. Cameron Ave. bridge over Lincoln Creek (near N. 30th St.). The $1.6 million project requires the bridge to be closed to traffic throughout its duration. The bridge deck is being completely replaced, as are the bridge abutment backwalls. Demolition on the existing bridge started in June. Street lighting and underground conduit lines near the bridge are also being upgraded. A public works borrowing file says the city is covering $1.4 million of the $1.6 million cost from its non-assessable structure fund. The bridge is located less than a mile from the Villard Avenue bridge, with the N. Teutonia Ave. bridge and a pedestrian bridge at N. 24th St. the only completely open creek crossings between the two bridges.

The N. Lovers Lane bridge near W. Silver Spring Rd. is the busiest bridge being rebuilt this year. Originally completed in 1970, the bridge accommodates approximately 9,000 motor vehicle crossings per day. Construction started two weeks ago on the $1.25 million project, which spans Union Pacific railroad tracks. The work is being conducted in partnership with WisDOT, with the city funding 20% of the project’s costs. The existing bridge deck will be removed and reconstructed in three stages, allowing the roadway to remain open to traffic throughout construction. The bridge will receive concrete surface repairs, placement of a concrete overlay on the driving surface and guard rail installation. The gravel shoulders of the approaching roads will be temporarily covered in asphalt and a more urban configuration with curbs, gutters, bike lanes and concrete sidewalks will be considered as part of a future project. Work is expected to be completed in early December.

The fourth and final bridge project is by far the least used of the four. The S. Dana Ct. bridge, located just north of Interstate 94 near S. Hawley Rd., will be replaced in partnership with WisDOT. Its usage is restricted by its limited connectivity. The bridge connects the Beth Hamedrosh Hagodel Cemetery and an adjacent house to the street grid, but going any further south would necessitate another bridge over the freeway. The only properties on the street to the north are The Encore strip club and a US Cellular-owned cell phone tower.

When the original bridge was built in 1926, it spanned a heavily-used railway called The Milwaukee Electric Railway & Light Company (TMER&L) line where interurbans and streetcars ran. The tracks are now long gone, but TMER&L successor We Energies continues to use the corridor for high-voltage power lines (which go over, not under the bridge). The bridge was last rebuilt in 1977. The rebuilt bridge will have narrower driving lanes, new bikes lanes and a sidewalk on the west side. A portion of the span will remain open during construction. The city is covering 20% of the cost of the $2.1 million project as well as the cost of repaving the surrounding roadway. Work, which began this week, is expected to be completed by the end of the year.

Want more information on any of the projects? The city has webpages available for each (Villard, Cameron, Lovers Lane and Dana).

UPDATE: An earlier version of this article said the Lovers Lane bridge would receive a polymer overlay. The DPW website was updated to indicate it is a concrete overlay and we have corrected our article in turn. The Dana Court bridge will only have a sidewalk on one side, not two.