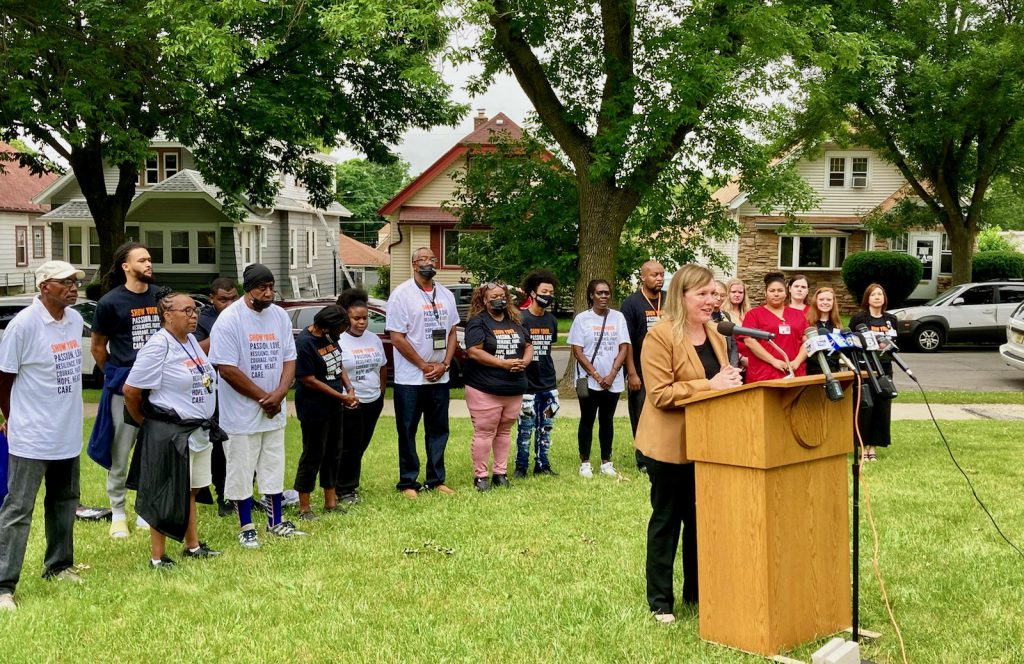 In a wide-ranging interview with NNS, new Milwaukee Health Commissioner Kirsten Johnson said her top priority is tackling the city’s ongoing lead crisis, which she called “the pandemic before the pandemic.”

Johnson, who joined the department in March, said although the COVID-19 pandemic remains a challenge, she also wants to begin reversing policies that have worsened health outcomes for the city’s Black and brown residents. This includes the city’s lead abatement program that focuses on removing lead from pipes, paint and soil in the city.

Johnson acknowledged the program has had its share of challenges and currently faces new ones as well.

“I want to fix it,” Johnson said. “This change doesn’t happen overnight, but I think there’s a real opportunity to do great work and leverage the resources and relationships we have to do that work.”

The city’s lead crisis gained attention in 2018, when Mayor Tom Barrett’s office announced that thousands of families hadn’t been notified about lead levels in their children’s blood. Former Health Commissioner Bevan Baker resigned amid the controversy, and the department issued a report that outlined gaps in the program.

The findings spurred an effort by the city to remove lead service lines in the city, which identified over 70,000 homes with lead pipes. With an average of about 1,000 removals a year, the city would need 70 years to replace the pipes at its current rate, according to Milwaukee Water Works.

Lead poisoning can have damaging health effects on children, according to the Centers for Disease Control and Prevention.  It can also create long-term cognitive challenges, including irritability, fatigue and forgetfulness.

Last week, the health department acknowledged that it had failed to reach out to a family in the Bay View neighborhood whose child had elevated lead levels in their blood. Department leaders told the Common Council in an email that parts of the lead program “have been mismanaged.”

Ald. Marina Dimitrijevic, chairwoman of the Public Safety and Health Committee, is calling for a thorough review of lead exposure cases.

“I believe that every case should receive the same magnifying glass,” Dimitrjevic said.

Johnson said she wants the foundation to “literally map out every process in that program and identify where the system has failed families, frankly.”

She said her department needs to improve the quality and timeliness of how it reports on homes affected by lead. Johnson also said she wants to work with primary care doctors to better screen children and pregnant women for lead poisoning to avoid hospitalizations.

“We’re chronically underfunded in public health, but we need to spend the money we have well,” Johnson said. The lead service line replacement program has $5.5 million allocated in the city budget.

For her part, Dimitjrevic said she wants to see the city take a more proactive approach. Specifically, she would like to use American Rescue Plan funds to replace pipes. The American Rescue Plan provides emergency financial relief to state governments, local municipalities and residents battered by the pandemic.

“We need to take 10 steps back and ask ourselves what we’re doing here,” Dimitrjevic said.

Dimitrijevic said she’s been “astounded by the straight-up complacency” she’s seen on the lead issue.  She said she hopes that as a city, health officials can learn something from the pandemic and consider ideas like mobile sites and door-to-door outreach for lead poisoning.

“You can’t ignore the reality that most of the children being infected are Black and brown,” Dimitrjevic said.

Robert Miranda, an activist and leader with Get The Lead Out and Freshwater for Life Action Coalition, is also tired of waiting for change on this issue.

“I’m at a point where I think nobody’s going to do anything until we see actual deaths occur,” Miranda said. “It appears to me they’re OK with children being damaged because of this.”

Miranda said he believes the focus needs to be on removing lead pipes and teaching homeowners how to do so. While prevention methods are fine, he wants to see the pipes replaced as fast as possible.

He said the current situation was a result of “indifference and mess” in city government that is costing too much time.

“The level of frustration is definitely rising, there’s no doubt about that,” Miranda said.

Johnson said the city must also combat a crisis in rental housing.

“Many of them are owned by out-of-state investors and that creates a perpetual housing stock issue,” Johnson said. “The rentals are expensive, and they have lead in them and there’s a lack of engagement by landlords because it’s an investment property for them. It’s not where their family is living.”

She said other challenges include a lack of health insurance, which creates a major barrier to getting people the care they need. She also said she is concerned about infant mortality rates, as Black women in the city deal with drastically higher rates when compared with other groups.

The department is also in need of a strategic plan after a review from the state Department of Health Services that began in 2019 identified areas for improvement, including determining the role of the Board of Health and improving the staffing and quality of its Community Health Assessments and Community Health Improvement Program.

Johnson said the audit by the Department of Health Services has made the need for transparency between the state and city apparent, and she hopes to create that environment in the health department as well.

“To be frank, it’s been hard because you only know what people tell you,” Johnson said. “There’s a culture of not sharing information and that’s been challenging.”

Dimitrjevic and Ald. Chantia Lewis, a fellow member of the Public Safety and Health Committee, both voiced concerns about turnover in the department in interviews with NNS.

Leadership has changed dramatically over the last year, including the departure of former commissioner Dr. Jeanette Kowalik and the dismissals of chief of staff Lilliann Paine and deputy health commissioner Griselle Torres. Paine was instrumental in getting racism declared as a public health crisis in 2019.

Johnson, who served as health commissioner for Washington and Ozaukee counties before her current job, said she wanted to bring in team members who shared her vision, resulting in Paine and Torres being let go.

Johnson commended them for their work in addressing health equity, a goal that Johnson said she shares.

“It was really about building my own team and knowing where I wanted to take the department,” Johnson said.

Johnson hopes to have a strategic plan to share by spring 2022. In the meantime, she plans to host listening sessions and go into the community. She also wants to use social media to get feedback from residents and members of her department.

“For me as a white woman, it’s not my voice that needs to be at the table. My role is to advocate for what people in the neighborhood want,” Johnson said. “My role is to bring those voices forward at the tables where I sit.”

‘I want to fix it’: Health Commissioner Kirsten Johnson calls Milwaukee’s lead crisis her No. 1 priority was originally published by the Milwaukee Neighborhood News Service.