Criticism of police and solidarity and respect for Roberto Zielinski and his grieving family.

By Isiah Holmes, Wisconsin Examiner - Jul 21st, 2021 04:21 pm
Get a daily rundown of the top stories on Urban Milwaukee 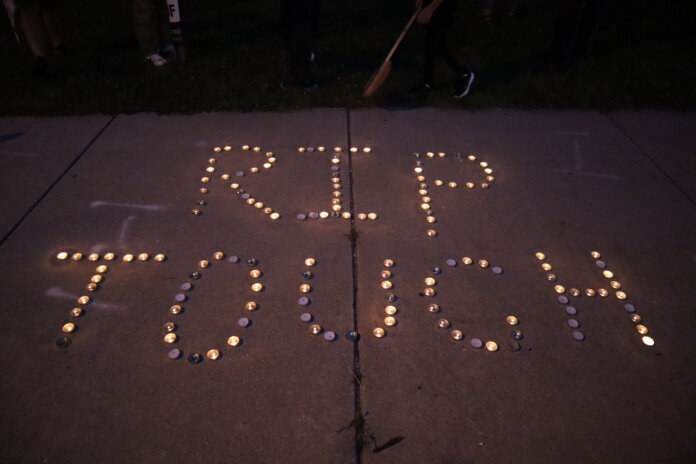 Activists and community members gathered in front of Milwaukee Police Department’s District 2 station over the weekend to demonstrate solidarity and respect for Roberto “Touch” Zielinski and his grieving family.

The 49-year-old was killed on May 30 by an officer from the department’s Tactical Enforcement Unit (TEU) after police were warned of a suicidal man firing shots from his porch.

The gathering was organized by the Milwaukee Alliance Against Racist and Political Repression. The group’s co-chair, Omar Flores, announced that the family could not attend, because it was too painful.

“The mother is grieving quite a bit right now,” said Flores.

“Tensions are high, really really right now. When you lose a family member, that’s not an easy thing to be enduring. And this is exactly what police violence does to so many families in this city, and across the country,” Flores continued. “Police violence splits up families, it creates tensions where it doesn’t need to be and it destroys communities.”

Making this situation even more difficult is that it involved mental health problems and a man that police were told was looking to take his own life.

On May 30, MPD was notified by two 911 calls of a suicidal man firing shots from his porch. “He’s legit trying to be suicidal,” one caller told 911, according to video and audio released by the department. “So if they come up on him, he’s probably gonna shoot.”

Zielinksi’s family has stated that, according to call logs, he called the police himself as well. Portions of the body camera video and 911 call audio were released as part of a community briefing video prepared by the department. The body camera footage released is from the perspective of the officer who fired the shots, as well as another officer who was nearby.

However, community members and Zielinksi’s family are now calling for the full, unedited body camera footage to be released. MPD has responded that redactions are needed to protect personal information and identities, as well as information that could affect the ongoing investigation.

Russell Ainsworth, the family’s attorney, who specializes in civil rights cases, took issue with MPD’s statements of transparency. At a July 16 press conference at city hall, Ainsworth said that the department “says that it is releasing a video of the shooting for transparency purposes, but releases a video that is doctored and edited to push their narrative.”

Added Ainsworth: “This is not transparent, that is not accountability and that is not justice.”

The lawyer also stated that moments before he was shot, Zielinski asked that his sister — Milwaukee PD officer Angela Gonzalez — be contacted. Angela Gonzalez’ son, Jacob Gonzalez, underscored the dynamic which he said plays out in situations like this shooting.

“I wish that other crises that happen, just like what happened with my uncle that day, can be treated in the right way, in a way where officers know how to handle and to respect the civilians that they protect.”

MPD Capt. Patrick Pajot, who spoke in MPD’s community briefing video, described TEU officers as having “received special training to respond to these volatile types of calls and are trained to attempt to de-escalate the situation.” Although officers can be heard on the tapes asking Zielinski to drop the gun, the officer who fired repeats several things that activists describe as eagerness: “I’ve got him in my sights,” “I’m going to take him” and “I’m ready to take him,” can be distinctly heard from the same officer.

Meanwhile, another officer attempts to calm Zielinski and give him orders. “Sir, come out with your hands up,” he yelled. “Touch,” the officer said, using Zielinski’s nickname. “It’s okay just put it down,” the officer yelled. “Don’t do it, buddy.”

As this happens, the shooting officer comments that he’s aiming for Zielinksi’s chest. Shortly afterward, that officer fired a single shot, killing Zielinski. After moving up, officers prepared to administer medical aid before the video cuts.

Milwaukee Fire Department personnel pronounced Zielinski dead once they arrived. In the body camera video, an officer pointed out that Zielinski aimed the gun at his own head at one point. The Waukesha Police Department is investigating the shooting, as part of the Milwaukee Area Investigative Team.

“Whenever there is a lost life, obviously there is a tragedy involved,” said Milwaukee Mayor Tom Barrett. “The reports I heard was the individual did have a gun, and that’s why the police responded. But nobody likes to see a life lost.”

At the vigil, Flores spoke of the impact that Zielinski’s loss has had on the people around him.

“When I had first seen a picture of Touch,” said Flores, “and we had posted it to our Facebook, we had a dozen people reach out to us both from New Jersey and Milwaukee saying, ‘I can’t believe this happened to my friend. I can’t believe this happened to my family member.’ I’ve never seen that happen, no one really knew about our Facebook page. They just found it right away. And that just speaks to how much impact he had on the community around him, not only in Milwaukee but also in New Jersey. So that just speaks to the kind of person that Touch was.”

Looking at Zielinski, Flores said he saw shades of his own uncle, who deals with mental health problems.

“It’s so hard to see a face like that and think that could’ve been anybody who deals with mental health issues,” he said. “That could be any Black person, any brown person.”

Flores stressed that “they’re not just who they are when they’re having a mental health crisis. We know that there’s also a beautiful sweet side. Because the people that have been in the lowest valleys, they know how beautiful it is to be up on a mountain. And they spread that love to other people.”

Flores condemned those who have questioned why activist groups should care about the Zielinski shooting.

“The news keeps asking this and it’s really irritating to me, ‘cause I know a lot of people are asking this. ‘What could’ve the police have done different?’” he said. “And to me, that’s just such a crazy question because it’s so obvious if you just watch that video. What Touch needed — he needed help. He didn’t need some guy coming in rouge saying, ‘I’m going to shoot him as soon as I see him.’ No one needs that when they’re facing a mental health crisis. So who are you supposed to call? The system does not offer any alternatives for people who are going through these crises.”

Milwaukee is currently developing a task force to explore using unarmed first responders for certain service calls, particularly those involving mental health crises situations. Ald. Chantia Lewis expects that the task force will report its findings to the Common Council in six to 12 months. State lawmakers have also introduced bills that would transition police away from certain types of calls, like domestic violence and mental health.

Activists like Flores and Kamila Ahmed of The People’s Revolution aren’t satisfied, however.

“Roberto is a victim,” said Ahmed during the Sunday vigil. “I want people to remember that. Especially the media, when they’re talking about him. This man was a victim of police violence.”

The Milwaukee Alliance Against Racist and Political Repression has long-championed civilian control of the police through alternative boards rather than the existing Fire and Police Commission (FPC) and elected city leaders.