As of August 29, 60% of MCTS routes will be high frequency, with fewer stops and faster times.

The final phase of the system wide redesign of bus transit in Milwaukee County will begin August 29th.

The new system, called MCTS Next, is an overhaul of the existing network of bus routes to increase the amount of high frequency service by using fewer stops and shorter travel times. Once implemented, MCTS will be 60% high frequency and 40% regular or low frequency. To reduce travel times, MCTS is reducing bus stops along routes.

NEXT is a cost-neutral project. Existing bus service is being modified or partially eliminated. Planners have cut a number of low ridership sections along routes with each successive phase of the overhaul.

The transit system is preparing to implement the third and final phase beginning in August. “This is a big one,” said Tom Winter, director of schedule and planning for MCTS.

MCTS is planning a “very extensive campaign” of public outreach for the final phase of MCTS NEXT, Winter said. There will be virtual public meetings, 1,000 signs going up at bus stops around the system, updates on bus audio and video announcements and special issues of MCTS Bus Lines and Rider Insider. 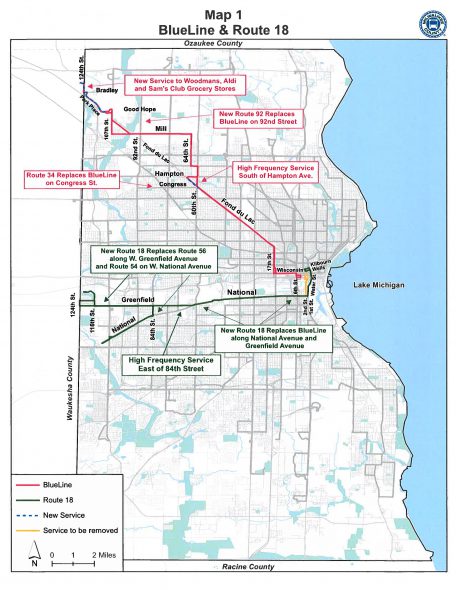 Under MCTS Next, the Blue Line will run between the intersection of N. 5th St. and W. Clybourn St. in Downtown and N. 124th St. and W. Bradley Rd.

Route 18 will run from N. Water St. and W. Kilbourn Ave. in Downtown out to N. 124th St. on the county line, and will serve downtown stops that used to be on the Blue Line.

The route will provide high frequency service between Downtown and S. 84th St., and it will primarily run along W. National Ave. West of 84th St., buses will alternate service along W. Greenfield Ave. and National Ave. 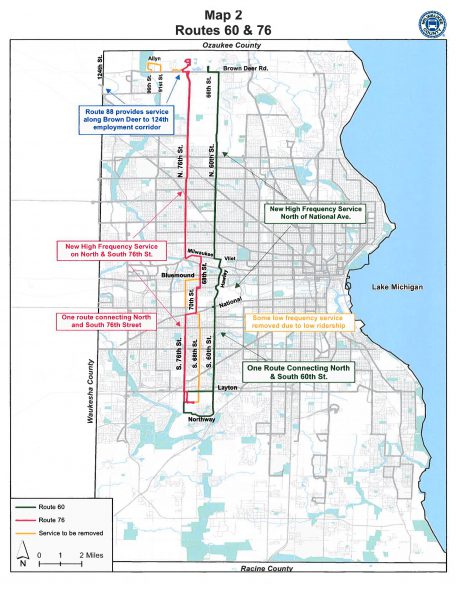 In order to simplify route names and prevent confusion for riders, MCTS is naming the route that runs north and south along 60th street between Southridge Mall and N. Brown Deer Rd. Route 60. Route 60 previously referred to service along W. Burleigh St., which is being renamed as Route 66. It will provide high frequency service between N. Brown Deer Rd. and W. National Ave. and will primarily run along 60th Street and S. Hawley Rd.

Route 76 will be a high frequency service running north and south on 76th St. between Brown Deer Rd. and Southridge. The new service will be one continuous route. It will use W. Milwaukee St. in Wauwatosa and S. 68th St. and S. 70th St. in West Allis to connect the northern and southern ends of 76th St. 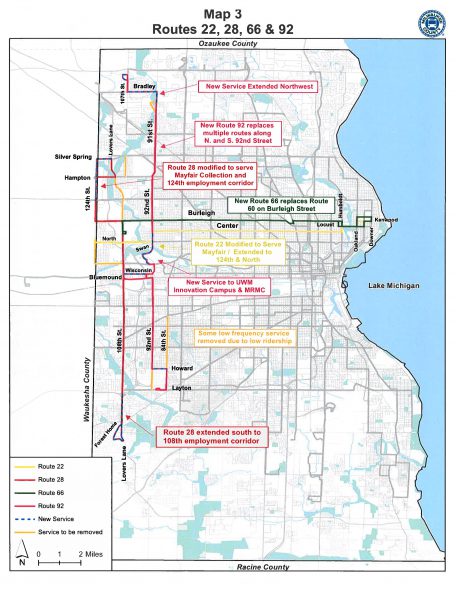 Route 22, which runs east and west on Center Street is being changed to serve Mayfair Mall. It will run along N. 92nd Street between W. North Ave. and Center St., and it will extend west along North to N. 124th Street

Route 28 runs north and south, mostly along 108th St., and it’s being extended along N. 124th St. to connect to the Mayfair Collection and an employment corridor along the county line.

This route was previously known as Route 650. But MCTS took the name for the service along 60th Street to simplify the service names. This service runs primarily along W. Burleigh St. Under NEXT, it will no longer run all the way to 124th St. and the Mayfair Collection. Passengers will have to transfer to Route 28 at N. 108th St.

This service will run north and south primarily along 92nd St. and N. 91st St. Once implemented, it will be a single continuous route that also provides access to the Milwaukee Regional Medical Center, 8700 W. Watertown Plank Rd. 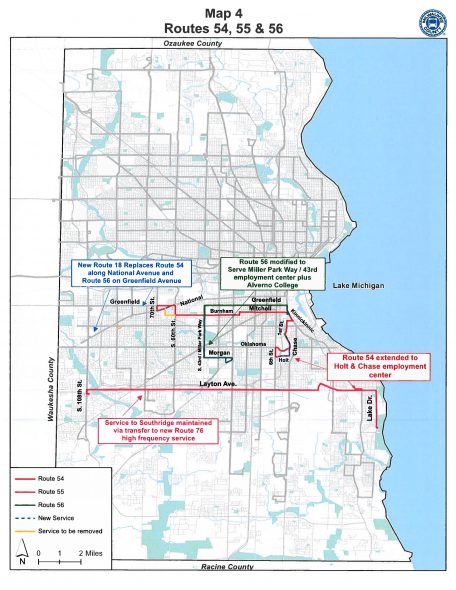 Route 54 will run from W. Mitchell St. north and south to W. Holt St. with new service along S. Chase Ave. It’s intended to serve a job center at the intersection of Holt and Chase.

Route 55 which runs east and west between S. 108th St. and S. Lake Dr. primarily along W. Layton Avenue will become high frequency service. It will no longer provide direct service to Southridge. Instead, passengers will need to transfer to Route 76 at S. 76th St.

Route 56, which runs along W. Greenfield Ave., is being extended down along S. 43rd St. and Miller Park Way. It will also provide new service to Alverno College, 3400 S. 43rd St.