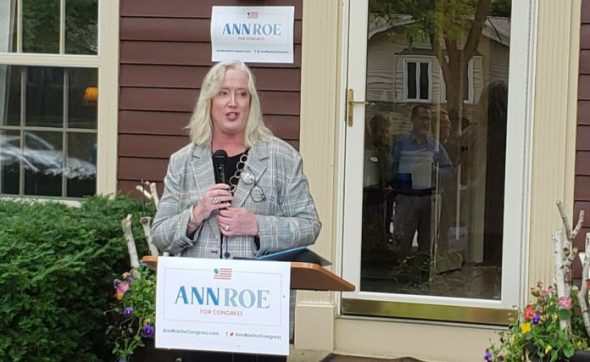 Ann Roe, a Janesville business owner and president of Downtown Janesville, announcing Tuesday that she will run for Congress in Wisconsin’s First District. Roe will seek the Democratic nomination to run against the incumbent, Republican Bryan Steil. (Photo by Erik Gunn/ Wisconsin Examiner)

A Janesville business owner and educator announced Tuesday she will seek the Democratic nomination to run against U.S. Rep. Bryan Steil next year, making her the first potential challenger to the two-term incumbent in the 2022 election.

Ann Roe, a political newcomer, focused her opening announcement on economic issues and on hearing the voices of people she said have been left out of politics.

“It is time for change in this district,” Roe said. “We must bring everyone along so they can pursue their dreams of an affordable education, owning their first home or starting their own small business.”

Roe operates an education consulting firm that assists high school students in the process of applying for college. She is also the president of Downtown Janesville Inc., a business improvement district in the city, a former university lecturer in business marketing and communications and former executive director of the Beloit-Janesville Symphony Orchestra.

She described herself Tuesday as “someone who will work hard and focus on practical solutions that will make a difference for thousands of families in our district and our communities.”

Although it was held by Democrat Les Aspin from 1971 to 1993, Wisconsin’s First Congressional District has become an increasingly safe Republican seat since the mid-1990s. Former House Speaker Paul Ryan (R-Janesville) held it for two decades, and Steil, his former aide won handily in 2018 after Ryan decided not to run again.

Roe said she intended to win “with a strong ground campaign that has already begun,” asserting that many voters in the district have felt unrepresented.

“We’ve had a lack of action or a lack of substantive problem solving done at the federal level,” she said. “The current representation does not include everybody at the table.”