By Edgar Mendez, Milwaukee Neighborhood News Service - Jul 7th, 2021 11:15 am
Get a daily rundown of the top stories on Urban Milwaukee 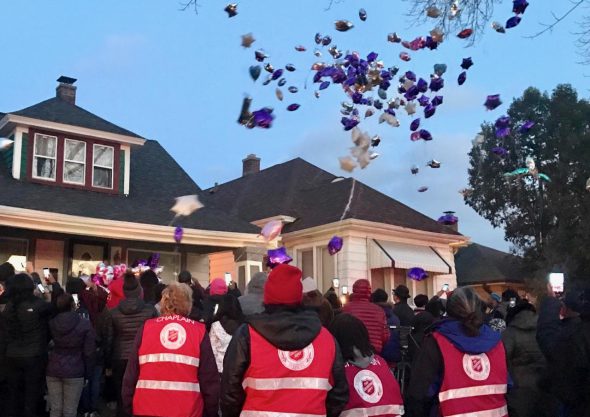 Salvation Army chaplains attend a balloon release for a young shooting victim in Milwaukee. “I say a prayer for me and whoever I come in contact with once I’m on scene,” says chaplain Melvin Reese, 69. “The role of the chaplain is to give spiritual and emotional care to any citizen that is suffering from grief or trauma.” (Photo provided by Salvation Army from Milwaukee Neighborhood News Service)

When Melvin Reese, 69, hears his work phone ring, he knows someone in crisis needs his help.

“I say a prayer for me and whoever I come in contact with once I’m on scene,” said Reese, a member of the Salvation Army Milwaukee Chaplaincy Program. Reese and other chaplains in the program, a partnership with the Milwaukee Police Department, are trained to respond to violent and often tragic scenes.

Sometimes they’re called to a murder scene. Other times they respond to suicides, vehicle accidents or any other situation that officers feel their services are needed. The chaplains also provide follow-up care to those in need.

“The role of the chaplain is to give spiritual and emotional care to any citizen that is suffering from grief or trauma,” said Reese, who also serves as a deacon for the Lamb of God Missionary Baptist Church in Milwaukee.

What they do once on-scene depends on the situation, according to Reese, but many times it includes talking and praying with a victim’s family at a moment where emotions and despair run high.

Milwaukee’s chaplaincy program, which started six years ago, was launched at the request of the police department during a time of increased crime and violence in the city, according to Pastor Veloris Brooks, the Milwaukee Chaplaincy Program coordinator.

Currently, the team consists of 53 chaplains, Brooks said.  Thirty, including Reese, are on call and rotate an emergency phone that can ring at any hour and any day of the year.

“They bring a calming presence to a really bad situation,” said Eric Pfeiffer, captain of Milwaukee Police District 4, which works with Reese and his team of chaplains. “Our ultimate goal is to stop that violence from continuing.”

Knowing that chaplains are there can be reassuring to both the community and police officers, Pfeiffer added.

“When someone puts on that chaplain vest, people know what they’re out there doing,” he said. “We’re really grateful for their help.”

In addition to providing emotional support, chaplains serve as a bridge between law enforcement and the community, which helps officers focus on solving crimes.

Sometimes that means, for example, explaining why a murdered relative’s body is being left out in the cold.

“You feel for the loved ones, but you have to explain that the police are not being disrespectful and that it’s part of the investigation,” Reese said.

“These chaplains are responding to a different type of disaster in our community,” Brooks said.

To become a chaplain, applicants must pass a background check and complete several courses, including training for the MPD Citizen Academy, and shadow a senior chaplain for the first 30 days.

The courses they take provide training on spiritual and psychological first aid, suicide prevention and teach the chaplains to help people deal with tragic situations. Their belief in a higher power supplements that training.

“I fall back on my belief in God and strengths,” said Reese, before reciting Philippians 4:13. “I can do all things through Christ who strengthens me.”

Not every call involves violence.

Reese recalls one incident when he went to check on a resident. The man had late-stage prostate cancer and was mourning the death of his wife, which had occurred several years earlier.

Reese ended up taking the man to Southridge Mall to have his glasses repaired. There, the man saw a sign featuring a paraplegic with no legs.

“He said: ‘That guy has a problem, and my problems are nothing compared to his,’” Reese recalled. That statement stuck with Reese, who also has to find ways to address his own challenges while empathizing with those of others.

To unwind from the misery he sees on a regular basis, Reese retreats to his prayer room when he gets home.

“I can go into that room and just meditate —cry—think about the family members I was just involved with and also focus on myself and my well-being,” he said.

Reese also attends an empowerment and prayer service just for chaplains every other month. Brooks said she organized the special service to ensure they have support specific to their experiences as chaplains.

“I am not to assume they are being spiritually equipped for the job we do,” she said. “Those who serve also have lives, situations and tragedies that they go through.”

The pandemic created new challenges for the chaplaincy program. Most chaplains, including Reese, took themselves off the call rotation out of fear of contracting the virus and bringing it back to their families or others.

“I said to myself that well, the police are still calling for chaplains, but we’re not responding because we’re afraid,” Reese said. “I took a six-month sabbatical until I was comfortable.”

Some have still not returned, and the chaplaincy program is recruiting others to fill the void. Officials recently hosted two open houses so that interested individuals could learn about the program, Brooks said.

As for Reese, there’s no telling when he’ll be called to the scene of another tragedy. But when it happens, he said, he’ll be ready to respond.

“I don’t want to sound morbid, but I enjoy helping people even though sometimes there’s a death involved,” he said. “I feel like it is part of my calling for the community.”