By Laurel White and Megan Hart, Wisconsin Public Radio - Jul 1st, 2021 10:29 am
Get a daily rundown of the top stories on Urban Milwaukee 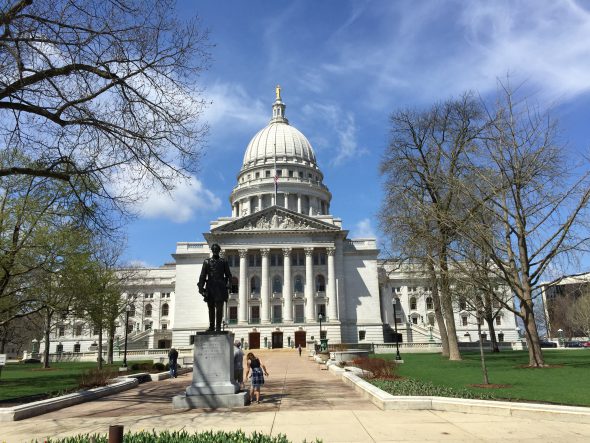 The state Legislature has approved and sent the next two-year state budget to Gov. Tony Evers. The plan would spend billions less than the governor proposed.

The state Senate approved the spending plan Wednesday night, about 24 hours after it was passed by the state Assembly on a mostly partisan vote. The vote was largely along party lines in the Senate too, with three Democrats voting in its favor: Sen. Janet Bewley from Mason, Sen. Brad Pfaff from Onalaska and Sen. Jeff Smith from Brunswick. After the session, state Senate Majority Leader Devin LeMahieu, R-Oostburg, touted the passage of what he called the most conservative budget in a generation.

The budget will move to Evers’ desk, where he could use his veto pen to make changes or veto the plan entirely.

The budget is the product of the Republican-controlled Joint Finance Committee, which made major changes to the spending plan proposed by the governor earlier this year. Overall, it would spend billions less than Evers called for and omit major proposals from the Democratic governor, including legalizing marijuana, expanding Medicaid and raising the minimum wage. It also includes a $3.4 billion tax cut the governor didn’t propose.

“Our state is worth the governor’s budget,” Bewley said. “The governor looks at the past, present and the future and (Republicans’) budget looks at today. It’s a thin, inadequate budget that just takes care of business today.”

Bewley later told reporters she believes the governor will improve the plan with his veto pen.

Under the spending plan, one of the governor’s biggest priorities, K-12 education, would be funded at roughly $800 million less than what he called for. Republicans approved a $128 million increase for schools after the governor asked for a $1.6 billion bump. Lawmakers also added about $650 million to fill an education funding gap created by a proposed property tax cut from GOP lawmakers. Those property taxes would have been used to fund K-12 schools and higher education.

A major part of the governor’s education plan was a proposed $713 million increase in special education funding. Right now, the state picks up about 28 percent of eligible special education costs for districts — Evers’ budget would have increased that to 50 percent. The GOP plan only increases the state funding to 30 percent.

State Sen. Bob Wirch, D-Somers, argued Republicans’ choice to use an expected influx in state tax revenue for tax cuts, rather than increased education spending, is a missed opportunity.

“You had a chance to catch up in this budget, to fulfill your promises to children with disabilities. You turned your back on them,” Wirch said. “You gave a little bit of money when you had unprecedented amounts in this budget. You got the money. You didn’t want to spend it on our most vulnerable citizens.”

Republicans have touted the budget as reasonable and responsible, calling Evers’ asks too expensive and politically motivated. They point to increased spending on broadband internet expansion across the state and more state support for nursing homes, as well as the tax cuts, as major accomplishments in the plan. Republicans say the average Wisconsin family will keep about $1,000 annually thanks to the cuts. According to the Legislature’s nonpartisan budget office, an individual or family that earns between $50,000 and $60,000 per year would save $172 on income taxes annually. There will also be savings for homeowners from property tax cuts, which Republicans estimate to be $300 per year for a “typical home.”

He called the tax cuts “transformational” and said the budget focuses on the state’s core priorities.

“When I sat in those listening sessions, I don’t think I had any one of my constituents in the 12th Senate District say, ‘Let me send more money down to Madison for you to spend, because you know what, Mary, you guys take that money down there because you spend it much wiser than my family does. You know how to spend my money,'” Sen. Mary Felzkowski, R-Irma, said.

Wisconsin is one of 12 states that hasn’t expanded Medicaid, but she argued it all Wisconsin residents have access to health insurance coverage.

“When we talk about the people that we would be picking up, (Medicaid) expansion would add able-bodied, childless working-age adults,” she said. “Medicaid expansion is wrong for Wisconsin.”

During negotiations, GOP leaders also pointed to a wave of federal aid money flowing to the state under the latest coronavirus packages. They said those funds remove the need for larger state investments because they will provide sufficient support for schools and other state-aided programs, like public transportation.

The budget acknowledges that next time around, Wisconsin is unlikely to see the same levels of federal funding as it has during the COVID-19 pandemic, Sen. Howard Marklein, R-Spring Green said. The state will end the year with an unprecedented $2.1 billion in its “rainy day fund,” he said.

“Where I come from, when times are good, you try to save a little bit of money. That’s what we did in this budget,” said Marklein, co-chair of the Joint Finance Committee.

The governor hasn’t said whether he will sign or veto the budget. Evers has one of the most powerful veto pens in the country, with the ability to delete words, numbers and punctuation from the budget. For the last budget, he used his veto authority to increase school funding by about $65 million, along with about 75 other changes.