With less regulation of guns. One of several Republican bills Evers likely to veto.

By Shawn Johnson, Wisconsin Public Radio - Jun 24th, 2021 10:24 am
Get a daily rundown of the top stories on Urban Milwaukee 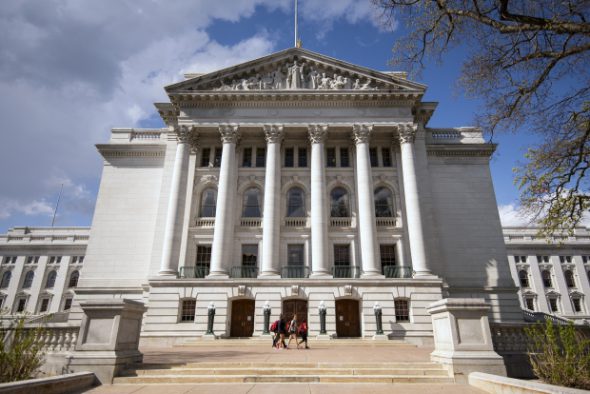 Wisconsin Republicans sent a variety of bills to the governor’s desk Wednesday, from a measure seeking to exempt the state from federal gun laws, to bills that would change the rules for local redistricting and county opioid lawsuits.

While the plans zipped through the Legislature, some appear to be headed for vetoes by Democratic Gov. Tony Evers, though the future of other proposals passed Wednesday remain unclear.

Wisconsin would proclaim itself a “Second Amendment Sanctuary” state under a bill senators sent to the governor’s desk on a voice vote.

Just what that means would be expansive. Guns made here after the bill becomes law would have to be stamped “Made in Wisconsin.” Guns that are built here and never leave the state would, according to the bill, not be subject to federal regulation.

Certain types of federal gun laws would be unenforceable, according to the bill. That includes any federal “act, law, statute, rule, regulation, treaty, or order” that bans or restricts a broad range of weapons, including semi-automatic firearms or assault weapons. The federal government would also be banned from prohibiting certain types of bullets, and the bill would ban the federal government from requiring the registration of firearms.

Given the likelihood of a lawsuit should the plan become law, the bill includes instructions for how it should be defended in court. Specifically, it says the Legislature is using its authority under “the second, ninth, and tenth amendments to the U.S. Constitution and in article I, section 25, of the Wisconsin Constitution.”

The Ninth Amendment affirms rights not specifically enumerated in the U.S. Constitution, the 10th Amendment references states’ rights, and the article referenced in the Wisconsin Constitution further asserts the right to bear arms.

Chances are good the plan won’t get that far. Evers has regularly pushed for tougher gun laws and is likely to veto the plan.

Senators also sent a plan to Evers’ desk that would extend the deadline for local governments to redraw their political boundaries, giving counties nearly eight extra months to finish the process.

Redistricting, the process by which political districts are redrawn every 10 years after the U.S. Census, is running behind schedule this year because COVID-19 delayed the completion of the Census in 2020. The detailed population data states and local governments use to draw political districts won’t be available until mid-August.

The bill does not address redistricting for state legislative or congressional districts.

While some change will be needed in order to address the Census delay, Democrats argued Wednesday this proposal went too far.

“I think it’s worth calling out Assembly Bill 369 for the Trojan horse that it is,” said Sen. Chris Larson, D-Milwaukee. “An attempt to try and delay redistricting, delay map-drawing and using a sledgehammer to do it when there are other methods available.”

Democrats are concerned Republicans, who wrote the proposal with the help of local government advocacy groups, will use the delay to preserve Wisconsin’s Republican-drawn Legislative map for another two years.

Evers has not said whether he will sign or veto the plan, but when it was heard in committee, a spokesperson for the governor said “bills making it harder for people to cast their ballots or to have fair maps in Wisconsin are likely going to be non-starters for him.”

The GOP plan passed on strict party line votes in both the Assembly and the Senate.

Another bill on its way to Evers’ desk would require the Wisconsin Department of Justice, led by Democratic Attorney General Josh Kaul, to cooperate with local governments that joined one of the lawsuits against opiate manufactures. It would also spell out strict requirements for how any settlement would get paid out.

The plan would require the Legislature’s budget committee, which is run by Republicans, to sign off on any settlements. Payments would have to be split 30-70 between state and local governments, with local governments getting the larger share.

Senators passed the plan without debate Wednesday, but Kaul released a statement reiterating his opposition to the bill. Kaul said the provision gave the budget committee too much power and said it should have a cap on attorney fees to make sure any payments go toward fighting the opioid epidemic.

“I support the idea of passing good legislation ensuring that Wisconsin recovers as much as possible and allocating a large part of Wisconsin’s share of those settlements to local governments,” Kaul said. “But the bill being rushed through the Legislature isn’t good legislation and it shouldn’t become law.”

Evers’ office did not say whether the governor supported the plan, but Evers and Kaul have typically seen eye-to-eye on similar disputes.

Democracy In The Park

GOP senators also gave final approval to a bill that would effectively ban future ballot collection events like the “Democracy in the Park” event Madison held in the run up to the 2020 presidential election.

Under the bill, future events would be prohibited unless they are held within 14 days of the election and “as near as practicable” to the clerk’s office. They’d also need to be run by the clerk or their staff.

The proposal, which Evers has hinted he is likely to veto, is part of a package of bills Republicans introduced following the 2020 election. Republican-led legislatures in other states have passed similar restrictions.

Other bills senators sent to the governor’s desk Wednesday include plans that would:

The full Legislature is expected to return to the Capitol next week to pass its version of the state budget.