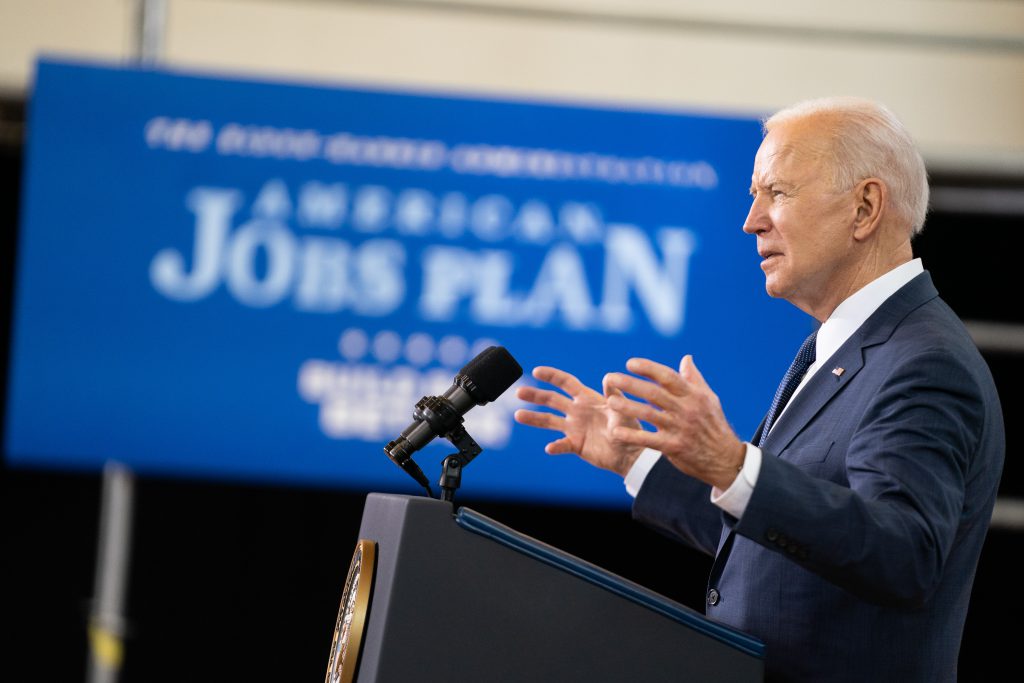 On a recent Friday, Skylar Barr and his grandmother, Jan Hornewer, were two of a half-dozen Wisconsin residents on a Zoom call with an aide to U.S. Rep. Ron Kind (D-La Crosse).

The call’s purpose: to make sure that Kind knows that they were enthusiastic supporters of two big bills now working their way through Congress — one on infrastructure and job training, the other on child care and education.

“What we are trying to do is get these bills passed,” Hornewer explained in a telephone interview a few days later.

The trillion-dollar American Jobs Plan and American Families Plan bills are products of President Joe Biden’s administration, but neither Barr nor Hornewer voted for Biden in the November 2020 election. In 2020 and in 2016, they supported Donald Trump. “He was for the people,” says Hornewer.

Now, however, the two are part of an independent campaign to generate support for an agenda that organizers say can appeal to independent and Republican voters, not just the Democratic base — spending big on programs intended to boost jobs, job training and other priorities that advocates say can help working-class Americans who have felt left out by both political parties.

The campaign is organized by WorkMoney.org, a nonprofit advocacy group that set up the Zoom call with Kind’s office. While its work largely supports the Biden administration agenda, the organization has made a point of appealing to people across partisan lines.

Barr, 22, is the paid caregiver for his grandmother. He and Hornewer, 74, share a trailer home near Chippewa Falls. Under a program funded by Medicaid, Barr is paid $10 an hour to care for Hornewer, but only for 24 hours a week. The work requires much more time, however, he says, and when all that time is added up, he has calculated his real wage to be closer to $4 an hour.

Before the 2016 election, Hornewer says, she supported Democratic candidates. But she has long been jaded about whether politicians care about people like her and her grandson.

“They have to realize that we’re all here trying to live,” she declares. ”And I’ve said many, many times that if they had to live, even one day, or one week, or one month, the way we live, they would take more of an interest in these bills and do something for us. But they don’t experience that side of life.”

During the pandemic, facing mounting debts for daily living expenses, Barr says he and his grandmother have gotten some help. “But it doesn’t do much,” he says. “I mean, it’s not enough.”

He and his grandmother are enthusiastic about provisions in the Jobs Plan and Families Plan bills because of their ambitious scope, including programs to train people in new job skills and improve pay for health care workers. The fact that they were advanced by a Democratic president is beside the point.

“This isn’t a party thing — this is a people thing,” says Hornewer.

‘It’s not working for regular folks…’

Carrie Jo Grimes, the founder of WorkMoney.org, says she’s encountered many people across the country who appear to feel similarly.

After her own bout with COVID-19 in the spring of 2020, Grimes says she started WorkMoney to help people navigate new government aid programs created in response to the COVID-19 pandemic — and to advocate for more help.

The organization drew Republicans, Democrats and political independents. But across the political spectrum, “Everybody agrees that it’s not working for regular folks the way things are,” says Grimes. “The debate about the size of this bill — it’s something that’s really out of touch with the regular, everyday American’s life. It’s only happening in D.C.”

In May WorkMoney launched a $2 million campaign to urge 16 members of Congress, including Kind, to support the legislation. The campaign includes hiring organizers, recruiting members online and mobilizing them through text messaging. The organization is tax-exempt, registered under section 501(c)(4) of the federal tax law. That limits the group’s political spending to less than half of its funds, but also allows it to raise money from unidentified donors.

The campaign is aiming its message at Republicans as well as Democrats in both the House and the Senate whom it characterizes as moderates in either party. Besides Kind, those include both West Virginia senators, Joe Manchin, a Democrat, and Shelley Moore Capito, a Republican. Among the others are Republican Sen. Susan Collins of Maine and Democratic Sen. Kyrsten Sinema of Arizona.

For Kind, some of the pressure to vote ‘no’ might be coming from Americans for Prosperity, bankrolled by the industrialist Charles Koch. The right-wing group is buying media advertising, holding rallies and using direct mail and phone calls in 27 Democratic Congressional districts, including Kind’s, to undermine support for the Biden infrastructure bill, the Center for Media and Democracy reported.

In 2020 Kind survived re-election in a congressional district that went for Trump, even as Wisconsin voters favored Biden by a margin of a little more than 20,000 votes. During a visit to La Crosse in May by U.S. Labor Secretary Marty Walsh to help build support for the two bills, Kind spoke approvingly of the legislation’s goals while he “signaled that bipartisanship was the top priority for him,” according to a report in the La Crosse Tribune.

Grimes argues that WorkMoney’s membership across political lines shows that the legislation already has bipartisan support on the ground.

“I just want to shout from the roof that people in this country agreed, at a pretty high level, that it should be easier for hard-working people to get ahead,” she says. “And there are obvious, massive, overwhelming policies that everyday folks support. The Jobs and Families Plan is an example of that.”

Grimes started WorkMoney after having worked for nonprofits and as a union organizer. After recovering from COVID-19 and seeing family members and friends deal with job loss, challenges from remote learning and difficulties dealing with unemployment compensation, she and some friends gathered information, created a website and established a presence on social media to help answer people’s questions.

“This is getting regular people to resources,” Grimes says — helping them “take responsibility for their own financial lives.”

They also marshalled advocacy for more federal government support for people set back by the pandemic.

Membership is free. Grimes says WorkMoney has grown to 2 million people nationwide, including more than 90,000 in Wisconsin.

Hornewer has been impressed with how WorkMoney’s organizers have engaged her and other participants. “They kept in touch with you,” she says.

In January, the organization mobilized support for Democrats Jon Ossoff and Raphael Warnock in the Georgia special election for Senate, where the campaigns focused on giving Biden a Senate majority to help ensure passage of more pandemic response legislation. That led to Biden’s American Rescue Plan Act, enacted in March.

“Stimulus checks were really on the line in Georgia,” says Grimes.

Now, she says, the organization wants to persuade members of both parties that it’s in their political interest to support an ambitious agenda centered on American workers.

“We expect members of Congress to show us [they understand that] this pandemic isn’t over,” says Grimes. “We can’t quit now — we still need to create a much larger investment in the economy so people can get back to work with jobs that pay more … And we have a chance to do that.”