The Magic of Handmade Brooms 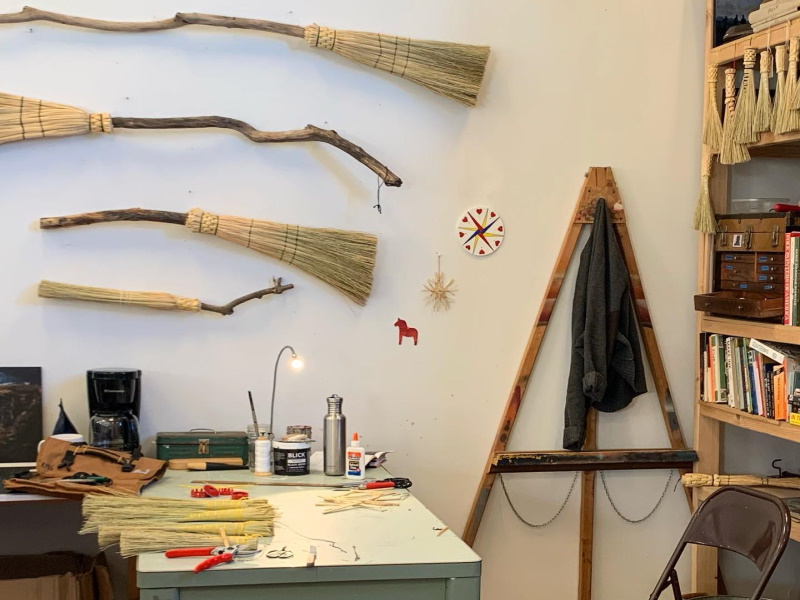 When Rachael Gonzalez moved to Mexico City after her husband Tom accepted a job there, she was excited to experience the sights, sounds and culture of a new place. Little did she know that her time there would shape her vision for Familiar, her small Milwaukee business that combines bodywork, spirituality/witchcraft and art to create healing.

Gonzalez’s interest in healing began at a young age. The Connecticut native was drawn to curative methods and herbalism as a child. Later, she attended North Park University in Chicago to study fine arts, and after college, split her time between two passions: being a painter and a caregiver.

Living in Chicago for 14 years, Gonzalez attended massage school while working odd jobs and creating art on the side. Even though the workload was overwhelming — “I was working myself to death,” she says — her vision for a future business was slowly coming together. 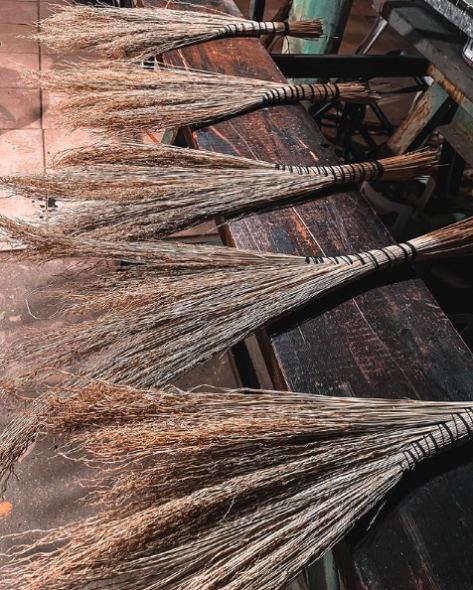 “I was doing this artwork and doing this healing work, and doing caregiving and making crafts at home and being an urban homesteader,” she recalls. “Looking back on my life, I used to keep all these things in separate pockets. But over those years…I was like, I feel like there’s a connection here.”

When she moved to Mexico, the connection became clear. As a massage therapist and herbalist who practiced reiki and witchcraft in private, Gonzalez observed the local peoples’ emphasis on herbalism and the work of curanderos, who practice healing through a combination of bodywork, plants and prayer. Learning about the curanderos helped her realize that she didn’t have to separate her practices. In fact, they could be even more powerful when combined.

“I had no idea this was a longstanding practice already in Mexico, and after learning more about their ways I wanted to be bolder in my healing practice with combining the three.”

Gonzales did just that. After settling in Milwaukee a few years later with her husband, she founded her small business.

“Familiar never would have emerged as the multifaceted practice that it is if I hadn’t been encouraged and validated by what I observed in Mexico.”

While emphasizing that “I do not claim to be a curandera,” at her studio on East Capitol Dr., Gonzalez offers massage, reiki and other bodywork. She also has a shop with handmade products including soaps, herb-infused oils, zines, candles and brooms that she weaves by hand. The broom making was inspired by the Mexican people’s daily ritual of washing and sweeping the sidewalks with enormous handmade brooms—much different than the mass-produced plastic brooms back home.

“I was so struck by this communal cleansing that everybody would do every day,” she says. “And the tools that they used to do it were always handmade, and I thought that was really beautiful.”

Back in the States, Gonzalez took a class and became obsessed with the art of broom making. “Most people take the class and are happy to have the one broom that they made,” she said. “I went home and wanted to make 500 more.”

Broom corn, actually a type of sorghum, yields long, stiff tassels rather than edible ears of corn. Between its introduction to the United States in the late 1700s until the mid 1900s, broom corn dominated in the Midwest, where the climate and soil conditions are ideal for it. At the end of World War II, most broom corn cultivation moved to Mexico, which is one of the top exporters of it. Today, the craft of handmaking brooms is a dying art with only a handful of makers remaining in the Midwest.

Gonzalez likes the brooms for their cleansing and spiritual properties, but also as an artist who appreciates beautiful, handmade objects. Others liked them, too. Even without advertising she began to attract customers, including local, self-proclaimed witches.

“I think that people who are looking for a magical tool are going to find it anywhere from Goodwill to, you know, Amazon, to an occult shop,” Gonzalez says. “I think that a lot of people maybe just stumbled on my work.”

Gonzalez also offers broom-making classes, which she said are open to everyone and often include historians and witches.

“I love teaching people in this kind of tri-folded way, where you get the joy of making something for yourself, you get the joy of knowing there’s a long history of makers behind you, and you can use it to emotionally cleanse your home as well.” 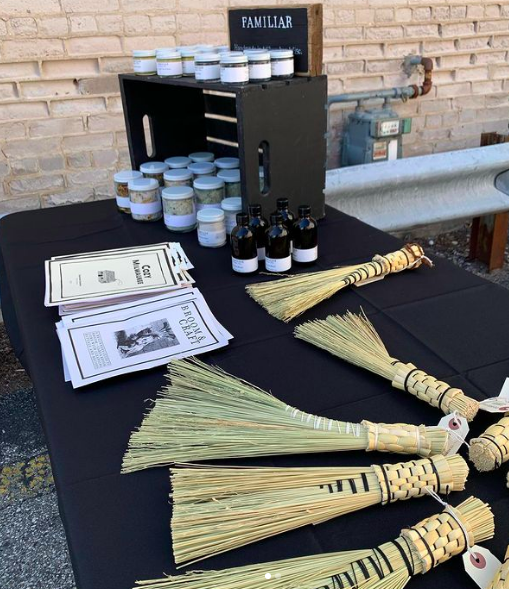 One person who discovered Gonzalez’s brooms is Sevan Arabajian-Lawson, who created a cobwebber broom in one of Gonzalez’s classes last September and uses it for ritual purification and everyday spiritual and magical practices. Arabajian-Lawson, a Milwaukee-based birth, postpartum, death and general spiritual doula and threshold guide, practices healing and spirituality via cleansing rituals, ceremonies and other daily customs.

“Personal cleansing is the broom magic practice I use the most,” Arabajian-Lawson says. In this ceremony, a small handheld broom is used to gently sweep the body from head to toe. “Sometimes I just sweep about an inch away from my body, sometimes I sweep against my skin. I stomp my feet three times to ground [myself], and will often use some herbs to smoke cleanse afterward.”

A larger cobwebber broom is Arabajian-Lawson’s choice for herbal dust washes and energetic clearing, which include sprinkling powdered or dry herb mixtures and salts on the floors and thresholds of the house, then sweeping them out through the front door. The process aims to remove negative energy and cleanse and refresh the space.

Gonzalez says she would like to see more educators encouraging people to learn their own magical practice without taking from someone else’s culture.

“My witchcraft is for the forest,” she says. “For the one percent I share on Instagram there is 99 percent I don’t share because it’s not for everyone to see. Social media is a tool for connection and education, not necessarily a diary and not always a full picture. Witchcraft is picking up trash on hiking trails, ripping out invasive [plants], shadow work, failures, sweat and tears and blood as much as it’s beautiful candles, lush plants and moon gazing.

The brooms allow Gonzalez to provide her students the opportunity to participate in their own healing.

Familiar is located at 204 E. Capitol Dr., Suite 105, in the Wellness East building and available for private, appointment-only sessions.