By Corri Hess, Wisconsin Public Radio - Jun 16th, 2021 11:48 am
Get a daily rundown of the top stories on Urban Milwaukee 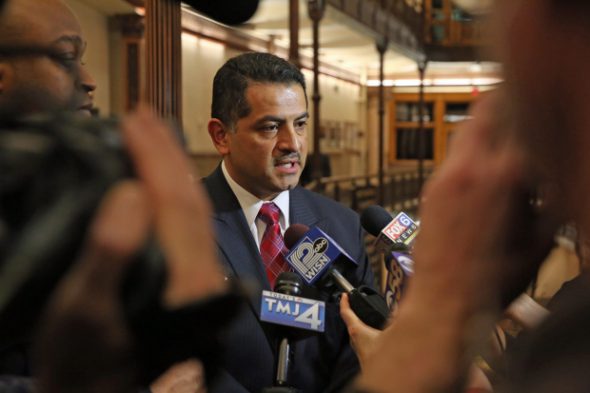 Former Milwaukee Police Chief Alfonso Morales has filed a federal lawsuit against the city alleging his civil rights were violated when the Fire and Police Commission demoted him last year.

Morales, who now lives outside of Milwaukee County in Oconomowoc, says his First, Fifth, Sixth and 14th Amendment rights were violated when he lost his job.

Last summer the city’s Fire and Police Commission issued Morales 11 directives ranging from community policing requirements to a range of data requests. When Morales was demoted on Aug. 6, commissioners did not discuss those directives or allow Morales to speak in open session before taking action.

This violated his civil rights, the lawsuit alleges.

“The defendants purposefully interfered with and prevented the plaintiff’s legitimate expectance of fulfilling his contract by summarily and illegally removing him as police chief in August 2020, in contravention of his rights under the contract and applicable laws,” the lawsuit states.

Morales’ contract was set to expire Jan. 8, 2024. His attorneys are asking for damages to be determined by the court.

The allegations in the federal lawsuit have been presented publicly before, but this latest lawsuit adds fuel to the contentious legal battle Morales and the city are already in. Last week, city officials agreed to mediation with Morales and his attorneys in hopes of keeping him from coming back to work.

In April, Morales’ attorneys filed an affidavit in Milwaukee County Circuit Court demanding the former chief be reinstated. They argued the city wasn’t following a December court decision by not returning Morales to his post as chief.

On May 19, Milwaukee County Judge Christopher Foley agreed, ruling Morales must be reinstated within 45 days.

Attorney Nate Cade, who was hired in April by the City of Milwaukee to handle the Morales case, said last week the city is appealing Foley’s decision.

Cade said Tuesday he couldn’t comment on Morales’ federal case against the city.