By Melanie Conklin, Wisconsin Examiner - Jun 12th, 2021 11:48 am
Get a daily rundown of the top stories on Urban Milwaukee 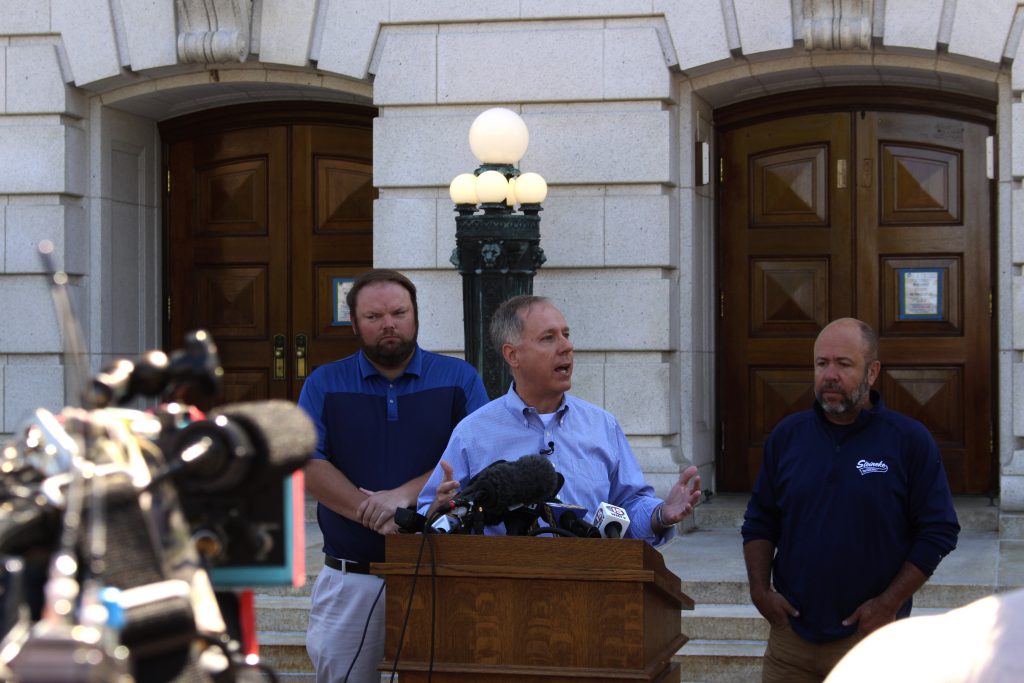 Republicans in the Legislature generally shrug off accusations from Democrats that they are being callous to Wisconsinites by refusing to provide health care coverage or elitist by giving tax breaks to the wealthy while making it harder for low-income families to get food or child care.

But there’s one charge that generates a quick reaction: the accusation of racism.

On Thursday, Assembly legislators of color and LGBTQ Democrats blasted the Republican leaders in the Wisconsin Assembly for seeking to silence and demean and retaliate against them. Speaker Robin Vos, Majority Leader Jim Steineke and Speaker Pro Tem Tyler August have gone to new lengths to keep them silent, the Democratic legislators charge — particularly during a legislative session.

Democrats called out the GOP leaders for actions during the current session that started in January. Republicans in both chambers — the Assembly and Senate — refused to schedule a resolution honoring Black History Month that came from the Legislative Black Caucus. Around the same time, they passed one honoring Rush Limbaugh, who was known for his toxic statements regarding race, women and other minority groups. Republicans also passed a resolution calling on the governor to send Wisconsin National Guard troops to the U.S. southern border.

The Democrats stated that their goal was to “lift the curtain on racist retaliation in the Legislature.”

The Assembly Democrats accused the GOP leadership of “doubling down on their manipulation, toxicity and racism,” in a release on Thursday with a variety of representatives of color laying out their stories.

“As leaders and as legislators, we must be able and willing to listen to other people’s experiences and to have an open exchange of ideas and viewpoints,” said Rep. Kalan Haywood (D-Milwaukee) in the statement. “Any action, whether intentional or unintentional, that results in any member being silenced, especially where it involves dialogue relating to equality or systematic racism, is hugely problematic, both for the Assembly and for the people of our great state.”

When Democrats have asked for resolutions — no matter how innocuous — they have received identical responses from the majority leader that Democrats say show leadership has decided to punish them for talking about racism.

Noting that a legislator’s job is to discuss and debate ideas, assistant Democratic leader Dianne Hesselbein (D-Middleton) said Steineke’s response to his discomfort around GOP behaviors being called out as racism has been to “stop scheduling Democratic resolutions out of spite.”

In recent weeks, Democrats have followed long-standing rules by contacting Steineke with requests to schedule their resolutions, which are often done in honor of a person, event, organization or other idea of significance. Such resolutions are generally scheduled and brought to the Assembly floor during session for a vote.

Democrats say that in a “bizarre and unusual twist” the response from Steineke’s office has been an email stating,

“Acknowledging receipt of your scheduling request.

Please see the attached and consult with your leadership team with any questions you might have.”

The attachment in each case is a copy of a May 11 statement by Rep. Francesca Hong (D-Madison) on the passage of AJR 48 recognizing Asian Pacific Islander Desi American (APIDA) Heritage Month. The statement praised two Republicans — Rep. John Spiros and Sen. Dale Kooyenga — for seeing the bill through and her legislative colleagues for supporting it. (Although her name was removed as the lead author and Republicans were given top billing.)

Hong said Thursday that “tackling systemic racism is one of the most important issues facing Wisconsin” and added that the work includes identifying and confronting oppression where it exists, including within the Legislature itself.”

Steineke is rejecting resolutions because of Hong’s press release mentioning racism, Democrats say — because he has failed to schedule resolutions after replying with her statement. That is particularly ironic, they point out, because Steineke is co-chair of the task force on racial disparities created by Republicans after they rejected taking any action in a special session on police reform called by Gov. Tony Evers. Steineke’s email to Vos offering himself up as chair of that task force suggested it be used as a political tool to quiet Democrats. “So this is how I see the task force. Leading it for anyone is probably a political loser,” Steineke wrote in the email.  “If you get nothing done you get hammered by the left, part of the middle and the press. You get something done you probably get some kudos from the press but the left and the right will have some issues with it.”  Steineke added that because he didn’t really have many political ambitions beyond his current job he was willing to take any hits.

Both Vos and Steineke passed on the opportunity to respond to the Democrats’ accusations for this story.

Rep. Mark Spreitzer (D-Beloit), who is gay, said that the GOP’s rote email responses to Democrats’ resolutions “underscore the fact that Assembly Republicans have no qualms about shutting down uncomfortable conversations and see no problem with trying to scapegoat a member of color.” He accuses Assembly Republicans of doubling down on racism and “following it up with homophobia and transphobia” by refusing to schedule the LGBTQ Pride resolution. “But they are mistaken if they think these actions do anything except emphasize the insidiousness of racism in Wisconsin and strengthen Assembly Democrats’ resolve to tackle it head on,” added Spreitzer.

“The Assembly as an institution cannot properly function under these oppressive and anti-democratic tactics,” Cabrera said. “In effect, Republican leadership has rejected American democratic principles and representative government by attempting to suppress the voices of the members of the minority party and the people they represent.”

Assembly Democratic Leader Gordon Hintz views the actions as part of a larger trend of GOP power grabs and punishments against the minority party that he views as damaging the Legislature: “It’s an additional tactic that is being used to bully the minority and an attempt to suppress individual members’ expression.”

Democrats call out ‘systemic racism’ by Assembly Republican leaders for punishing their free speech was originally published by Wisconsin Examiner.