City Agrees to Mediation With Morales 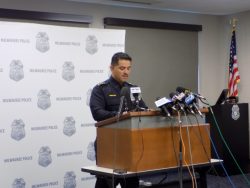 As the clock continues to tick toward July 3, when former Milwaukee Police Chief Alfonso Morales is set to get his job back, the city has agreed to enter mediation for the first time.

This could mean Morales walks away with a hefty settlement from the city, and Milwaukee keeps its acting police chief, Jeffrey Norman. The news comes after Norman recently emerged as a finalist for the top cop job in neighboring Wauwatosa.

The city and Morales’ attorneys will hold a scheduling conference Wednesday to choose a mediation date. Morales’ attorney, Franklyn Gimbel, said the former chief would consider a buyout, but is also willing to come back as acting police chief.

“We don’t know what the buyout would look like and that’s a very relevant factor in his decision-making,” Gimbel said. “If the buyout gives him the ability to find another job and guarantees reimbursed for the losses he suffered for the flawed decisions from the Fire and Police Commission, he will opt for that choice.”

In April, Morales’ attorneys filed an affidavit in Milwaukee County Circuit Court demanding the former chief be reinstated. They argued the city wasn’t following a December court decision by not returning Morales to his post as chief.

On May 19, Milwaukee County Judge Christopher Foley agreed, ruling Morales must be reinstated within 45 days.

At the time, Morales’ attorney said the chief was “ready, willing and able” to have his job back and not looking for a monetary settlement.

Attorney Nate Cade, who was hired in April by the city of Milwaukee to handle the Morales case, said Wednesday the city is appealing Foley’s decision.

“The city also is willing to negotiate a settlement with Morales through mediation,” Cade said. “If we reach a successful conclusion, the appeal would become moot.”

Morales was removed from his post as the head of the Police Department in August and demoted to the rank of captain by the Milwaukee Fire and Police Commission following months of turmoil amid racial justice protests and years of community distrust of officers. Morales chose to retire and sued for damages.

Part of the impetus for mediation appears to be a desire on the part of the city to keep Norman, the acting chief, in the position. Common Council President Cavalier Johnson said he hopes the matter is resolved quickly, so Milwaukee doesn’t lose Norman.

“It would be tragic and a mistake for our city to lose such a talented and dedicated individual to a municipality that is literally across the street,” Johnson said in a written statement. “I’m calling on the City Attorney and the (Milwaukee Fire and Police Commission) to sort out this situation in a timely manner so that we can have stability and certainty in the leadership of the Milwaukee Police Department.”

Norman is one of three candidates for Wauwatosa’s police chief. James H. MacGillis and David Salazar are also being considered. All three are current or former members of the Milwaukee Police Department.

Wauwatosa’s Police and Fire Commission is set to meet Wednesday night to talk to candidates and hopes to announce its decision by the end of June.

On Wednesday, Gimbel said Morales has the support of the Milwaukee Police Department and the community.

“He is getting great encouragement from the troops, he was a very well respected and loved chief by the rank-and-file cops on the street, and I think the Milwaukee public has supported him as one of the best chiefs the city has had in modern times,” Gimbel said.