By Laurel White, Wisconsin Public Radio - Jun 6th, 2021 01:01 pm
Get a daily rundown of the top stories on Urban Milwaukee 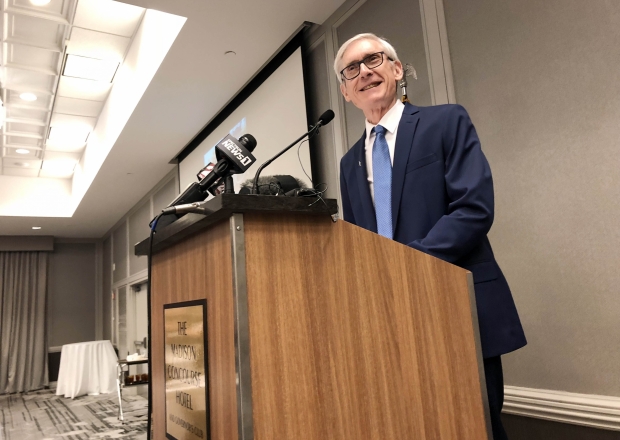 Gov. Tony Evers will seek a second term in office in 2022. The governor announced his reelection bid on Saturday during a speech at the state Democratic Party convention.

Evers, who narrowly defeated former Republican Gov. Scott Walker in 2018, told attendees at the virtual convention that Democrats have “a veto pen to protect” in the governor’s office.

“Wisconsin, I’m in. I’m running for re-election. We’ve accomplished a lot in the last few years, but we’re just getting started. We have more work to do, together,” he said. “This is the moment where we can choose to fix the big problems in Wisconsin and bounce back stronger than ever before.”

“We know Republicans aren’t going to make this easy,” he said. “The one predictable thing about this pandemic — and heck, ever since November of 2018 — is that Republicans will do everything in their power to stop our success, to keep us from getting things done, to keep Wisconsin headed in the right direction.”

In late 2018, GOP leaders in the state Legislature used a lame duck session to pass new limits on the governor’s power, just weeks before Evers’ inauguration.

Since then, Republicans have passed bills that would take away Evers’ authority to oversee federal funds, challenged his administration’s authority to issue public health orders in court and bypassed several of his special session calls on things like policing, gun laws and Medicaid.

For his part, Evers has vetoed a number of high-profile Republican bills, which he touted in his convention speech. The vetoed bills include measures that would have limited health officials’ power during the COVID-19 pandemic, put new restrictions on abortions and used a state budget surplus to fund an income tax cut.

The governor wanted to use the budget surplus to increase state education spending, a consistent budget priority for the former state schools superintendent. He used his veto pen in 2019 to increase schools spending in the last state budget.

“You remember the last guy who tried to tell you he was the ‘Education Governor’? Please,” he said, referencing Walker. “As the real Education Governor, let me tell you, we believe in fully funding our public schools.”

Last week, the governor pushed back on Republicans’ plan for school spending in the next state budget, calling it “paltry” and “an insult” to children.

Evers also used his speech to tout his administration’s renegotiation of Wisconsin’s contract with tech giant Foxconn. The revised contract would give the company $80 million in tax breaks in exchange for 1,454 jobs by 2024, a large decrease from the $2.85 billion deal for 13,000 jobs inked in 2017.

After the governor’s announcement, Wisconsin Republican Party chair Andrew Hitt said Evers “has nothing to run on except a record of abysmal failure and absent leadership.”

“Over the past three years, Wisconsinites have suffered the consequences of an administration fraught with mismanagement, incompetence and a governor who has been asleep at the wheel,” Hitt said in a prepared statement.

Partisan primaries for the governor’s race will be held in August 2022.

Though Evers used the convention to announce his re-election bid, another race was often mentioned by Democrats on Saturday night: the 2022 race for the U.S. Senate seat currently held by Republican U.S. Sen. Ron Johnson.

“We need to send Ron Johnson back to whatever planet he came from,” said Democratic U.S. Rep. Mark Pocan during his convention speech.

Johnson has yet to announce his re-election bid. Last week, he said he feels no pressure to announce soon and is “doing the Wisconsin public a favor” by not announcing and beginning the campaign season.

U.S. Sen. Tammy Baldwin urged the convention audience to commit to working hard over the next 18 months to support the eventual Democratic nominee.

“I know that while the road ahead is long, and it’s tough, you all know what it takes to get the job done,” Baldwin said.