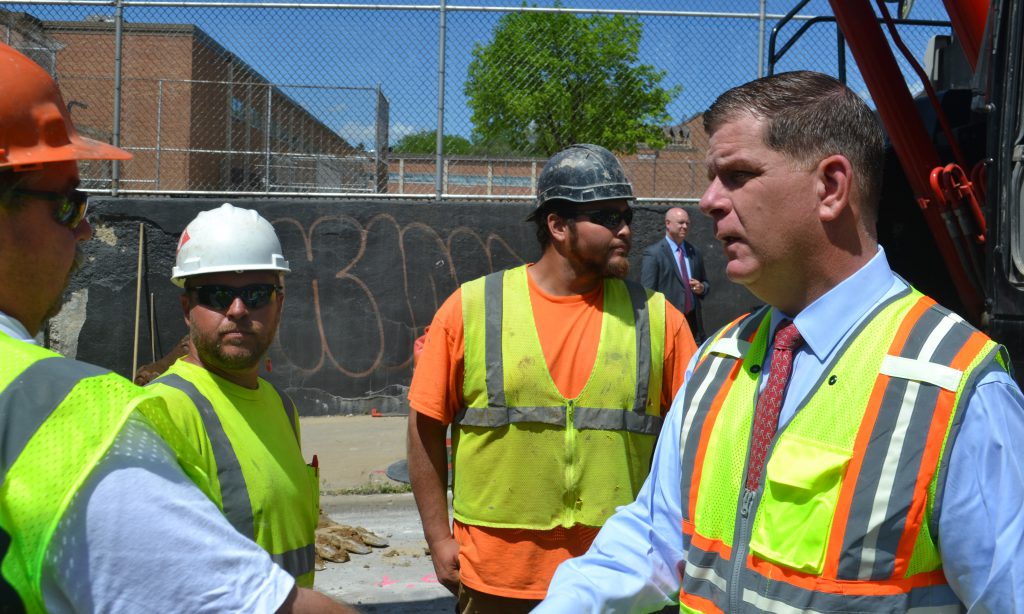 U.S. Labor Secretary Marty Walsh toured Milwaukee Wednesday in a sales pitch for the Biden administration’s infrastructure package, including conversations and photo ops to make the case for the legislation.

Along the way, Walsh got a reminder from immigrant rights activists of the promises that President Joe Biden and Vice President Kamala Harris have made to support immigrants after four years of anti-immigrant policies under former President Donald Trump.

To that, Walsh reiterated Biden’s commitment to immigration reform.

“I heard your stories,” Walsh said after a roundtable with Latin American immigrants who described the lives they have made for themselves in the U.S. after coming here as children with their parents. “I heard you own homes and businesses and teach and raise families and have American children here, and you were brought here as children and you have younger siblings that are American. We shouldn’t be the government that pulls families apart.”

The immigration discussion fell at the midway point of Walsh’s Milwaukee visit, when he stopped by the new offices of Voces de la Frontera on the city’s near South Side.

Christine Neumann-Ortiz, Voces executive director, described for Walsh the organization’s evolution since the start of the COVID-19 pandemic, when it began developing a network for essential workers, many of them immigrants. The organization became a vehicle through which workers who feared retaliation if they were undocumented could report workplace hazards, especially public health risks in the pandemic.

Subsequent pandemic relief legislation “really has to include citizenship for immigrant workers and their families as well,” said Neumann-Ortiz. “Immigrants have always been at the front lines — they’ve always had higher risk of injury and death, and never more so as during this pandemic. They are unsung heroes.”

Walsh pointed to his own immigrant roots, with his parents coming from Ireland in the 1950s and settling in Massachusetts. Family members were undocumented, he said, and as mayor of Boston before being tapped for Biden’s cabinet, he worked closely with immigrant rights organizations there and helped provide relief funds for undocumented immigrants in the city who couldn’t receive any of the federal pandemic relief money in 2020.

Eduardo Perea told Walsh about coming to Milwaukee some three decades ago, working in construction and raising a family with four children who are all citizens, including a son who recently earned a master’s degree in political science.

“I have to hide every time I see a police car,” he said, pantomiming crouching to avoid being seen. “After 33 years of living in fear, I consider myself an American — I need that piece of document.”

Alondro Garcia, who grew up in the U.S. and now teaches at Milwaukee Public Schools, told of her own challenges but also translated for her father as he described what it was like to work during the pandemic, at one point contracting the coronavirus. Everyone in his family had to stay home for two weeks when that happened to make sure they didn’t get sick also, she noted.

And when her father needed knee replacement surgery and his doctor urged him to rest his knee for six months, “after three months he had to go back to work because of necessity,” Garcia added.

Walsh said cabinet departments across the administration are all considering how immigration, including undocumented workers, intersects with their work. In the Labor Department, for example, the Occupational Safety and Health Administration (OSHA) does not question workers who report job hazards about their immigration status.

What sort of immigration protections might be part of the American Jobs Plan now under discussion aren’t certain, he acknowledged “because it’s a fluid situation.” But he declared that he would work to seek labor protections that would prevent retaliation against undocumented immigrants as well as legislation to provide a pathway to citizenship.

Walsh began the day at the Wisconsin Regional Training Partnership/Big Step, a program that partners with employers and unions to prepare young people for apprenticeship programs both in manufacturing and in the building trades. There, joined by Gov. Tony Evers, Milwaukee County Executive David Crowley and U.S. Rep. Gwen Moore (D-Milwaukee), he took part in another roundtable discussion with current students as well as graduates from the program.

The six participants described both their excitement about the opportunity they received to find careers in good paying jobs and the challenges many had encountered.

“It allowed me to gain skills that you don’t gain other places,” said Shantel Collins, now a Laborers Union member who has worked in highway and sewer construction projects. “You learn things that are not necessarily just construction, but ways of life.”

Among the challenges, one common theme for the five women was the struggle to find child care. Sheree Hurt related the decision that a classmate made to drop out of the program after struggling to complete and pass all the required tests, but falling short of the required hours to qualify for a journeyman’s certification because of the lack of child care.

“Nobody has a straight line,” Walsh said after hearing their stories. Child care, he observed, is part of the Jobs Plan’s companion legislation, the American Family Plan. The day before, he noted later in the tour, he visited child care programs in La Crosse and Eau Claire to help emphasize that point as well.

The day ended on Milwaukee’s near North Side, with a visit to a couple of Milwaukee Water Works repair projects — replacing aging main line water pipe at one location, and switching out lead-based pipe running to a home a couple of blocks away.

Walsh said that the American Jobs Plan allocates about $100 billion for replacing lead pipes nationally. Milwaukee has about 70,000 such vessels to be replaced, said Mayor Tom Barrett, but at the rate it has been able to do so, it could take 70 years to complete the job.

“People deserve better than that,” Walsh said. “They deserve to drink water out of the pipes [that] they don’t have to worry about.”

Infrastructure isn’t just construction, the Labor secretary said in a briefing with reporters.

“What President Biden and Vice President Harris have talked about is infrastructure and the American worker” — whether it’s “roads and bridges and pipes” or job training, child care and other support to help strengthen workers and with them the economy.

Talking earlier to the WRTP trainees, Walsh urged them to promote both pending proposals.

“And let’s not get caught up in Democrats vs. Republicans,” he said. “Let’s talk about the American Jobs Plan and the American Family Plan that are transformational for people that are struggling right now in America.”